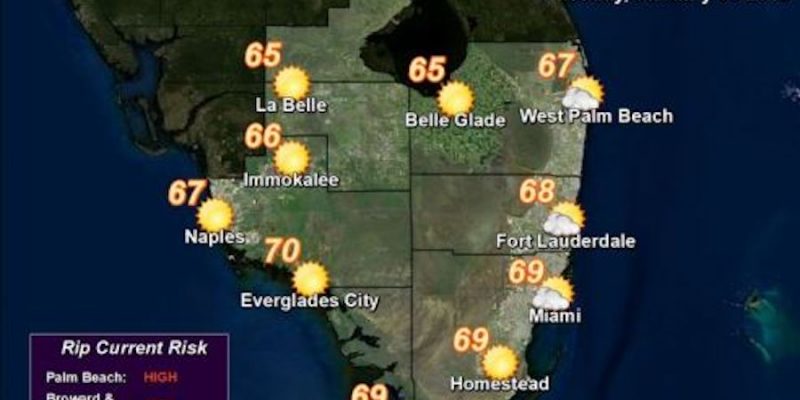 Global warming is at it again. More piercing cold is forecast to sweep through the U.S. Southern Florida temperatures are lower than normal for this time of year. Instead of temperatures in the 80s they are in the 60s. And today, in the 40s.

The National Weather Service forecasted: “Another period of breezy, dry, and somewhat cool weather will be in place across South Florida through mid week. The  northerly flow component currently in place has ushered in enough cooler air to keep high temperatures today and tomorrow below normal in the upper 60s and 70s.”

The rest of the country will not fare as well as Florida. Freezing temperatures will come in two waves of cold air fronts. The first wave from the Arctic; the second from Siberia. A storm is expected around Groundhog Day. Thunderstorms are expected in the south.

The rest of the country may still fare better than Minneapolis, however, where temperatures for Super Bowl 52 are expected to be well below zero degrees Fahrenheit.

High rip current warnings are in effect for Florida’s Atlantic Coast. No pun intended for Game of Thrones fans, but the Miami Herald announced that “winter is coming,” forecasting lows in the 40s for Miami-Dade and Broward counties today after the cold front came through on Monday.

An approaching cold front will bring increasing showers and potential for a few thunderstorms later tonight and through Monday afternoon. Cooler and drier conditions will follow the front Monday night and Tuesday. pic.twitter.com/Sh00SUhANV