In case you missed it, yesterday the Louisiana Democrat Party threw out a fundraising e-mail bashing Rep. Ralph Abraham for supposedly shirking his duty in Congress over the weekend…

There are two types of public officials in Louisiana.

Yesterday, Governor John Bel Edwards presented his budget proposal for the 2018 fiscal year. Since he was elected in 2015, Gov. Edwards has been fighting to balance our budget, keep the costs off the middle class, and promote growth and opportunity for every citizen of Louisiana.

During this time, Abraham missed at least six different votes. Instead of working to find a solution for over 100,000 Louisiana children who rely on CHIP and military families going without pay, Abraham profited at the “Elephant Gala,” with ticket prices ranging from $250 to $10,000, making clear that he cares more about big GOP donors than doing his job representing the people of Louisiana.

This is why we NEED YOUR HELP to elect more Democrats who will FIGHT FOR YOU!

We need your support as we give Louisiana Democratic candidates the best tools and resources available so they can win elections and start fighting for all of us! With your help, we can elect the men and women who will help keep a balanced budget, avoid government shutdowns, and protect funding for things that matter like TOPS and healthcare. But it all starts here.

A donation of $25 can make a HUGE difference in the mission to get more Democrats into public office. We deserve the best and with your help, we can get it!

Thank you for your dedication,
Stephen

On top of that, the Democrats’ soft-money organ Gumbo PAC popped this out on Twitter… 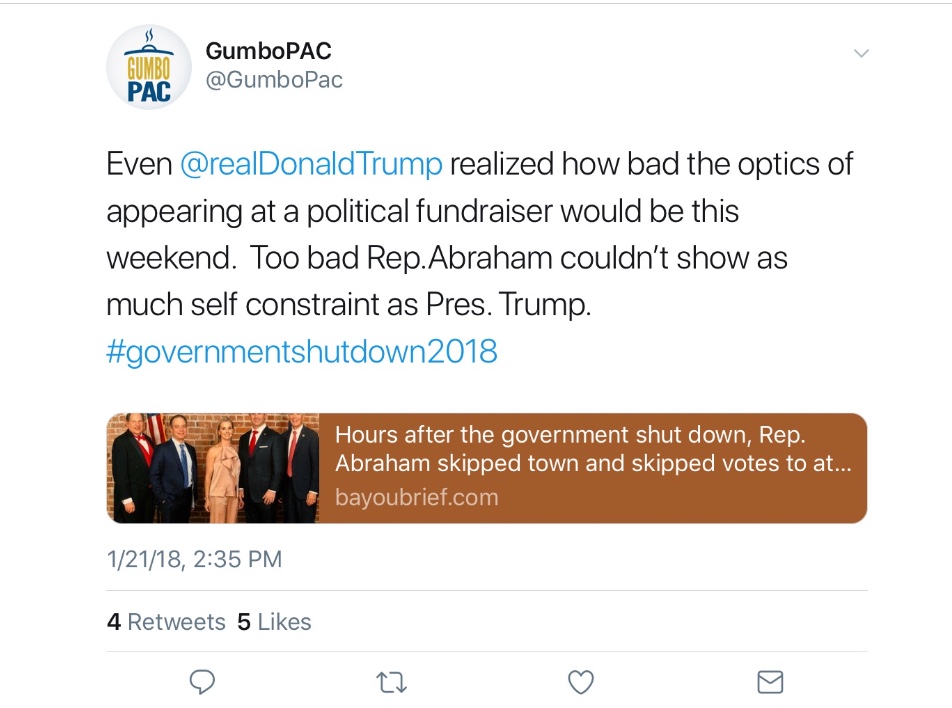 That tweet referenced a post at Lamar White’s nearly-defunct Bayou Brief, which had this as a headline…

Hours after the government shut down, Rep. Abraham skipped town and skipped votes to attend fundraiser

All of which would seem like a nice hit, except for a couple of problems. First, the Democrats’ narrative was almost completely fact-averse and second, the way they were wrong was comically obnoxious.

The state GOP had its first annual Elephant Gala in New Orleans on Saturday, which was a $250-per-person fundraising event at which Rep. Steve Scalise was set to receive its Red Elephant Award. Among the 300 muckety-mucks scheduled to be there were a large number of the state’s Republican elected officials including most of the members of the congressional delegation.

As a result of the shutdown, the rest of the delegation had to stay in DC over the weekend to make procedural votes and do other things amounting to an unnecessary waste of time. Abraham didn’t. He came home to Louisiana and he gave a speech at the Elephant Gala.

Why was Abraham back in Louisiana?

Because his father-in-law died on Friday and he had to attend the funeral on Sunday. The Democrats knew that.

As he was going to be in Louisiana for the funeral, and he’d already committed to attend the Elephant Gala on Saturday, he was at the Elephant Gala and had his picture taken – which occasioned Lamar White, Stephen Handwerk and the rest of the Democrats’ shaky-hatchet men to build their narrative about how Abraham shirks his congressional duties to dine at table with the swells.

Oh – and about that business of Abraham “profiting” from the Elephant Gala: it wasn’t his fundraiser. It was the state party’s fundraiser. Abraham didn’t get any money from that. In fact, he had a fundraiser scheduled for Monday that he canceled because he went back to DC to vote to end the Democrats’ shutdown.

What this comes down to is that Lamar White, Stephen Handwerk and the hacks who run Gumbo PAC attacked Abraham for going to a funeral. If not for the funeral he’d have been in Washington all weekend just like the rest of the Republicans in the congressional delegation.

But let’s not let the facts or basic human decency get in the way of a fundraising e-mail, right?

Exit question: do you think these goofballs would have gone to such lengths of assclownery if they weren’t concerned about Abraham potentially running for governor in 2019?

Interested in more national news? We've got you covered! See More National News
Previous Article Even The Advocate’s Tyler Bridges Isn’t Buying What John Bel Edwards Is Selling
Next Article We’re All Bracing For The Onslaught Now That Wendy Vitter’s Been Nominated For A Federal Judgeship