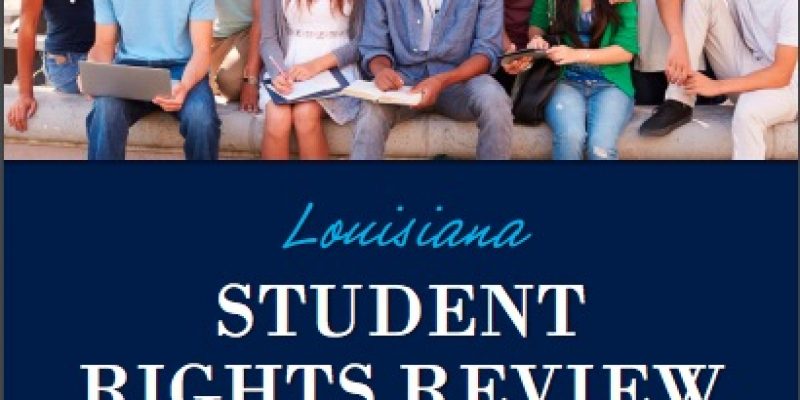 The right to religious expression, in particular, has been increasingly challenged and misunderstood in recent years, and many people have been led to believe our elementary and secondary schools must be “religion-free” zones. To the contrary, both federal and state laws specifically protect religious freedom rights in public schools. Thankfully, Congress and our state legislature still recognize the fundamental importance of religious liberty—the first freedom listed in the Constitution’s Bill of Rights.

This Louisiana Student Rights Review answers some of the most frequently asked questions and misconceptions about the law in this area. Our hope is that this publication will be: a helpful resource for Louisiana students, parents, teachers, coaches, administrators and school board members; a tool in avoiding campus controversies; and a positive reminder that when the government acknowledges “[w]e are a religious people whose institutions presuppose a Supreme Being… it follows the best of our traditions.”

The 15-page publication was mailed to all school superintendents in Louisiana and is available for free online.

It has received both criticism and acclaim.

Mixed reviews came from representatives of the ACLU of Louisiana and the Freedom From Religion Foundation (FFRF) who told the Shreveport Times that most of the law cited in the document is accurate– however, they have filed complaints or lawsuits in parishes specifically about religious expression in public schools. The ACLU also posted online its joint statement on religion in public schools.

Representatives from the ACLU of Louisiana and FFRF and Devlin identified problems with it, arguing that it focuses too much on Christianity and in some ways could even be construed as promoting it.

Mat Staver, the founder of Liberty Counsel, which represents Child Evangelism Fellowship nationally, commended the report. He said, “Students may exercise their constitutional rights to religious free speech while on public school campuses during non-instructional times. They do not give up those rights just because they are in a public school.”

The issue of offering guidelines about religion in Louisiana public schools is not new. In 2009, members of the Board of Elementary and Secondary Education unanimously voted to adopt new rules that eliminated language that would have banned the teaching of “creationism or intelligent design” and teaching materials that “advance the religious belief that a supernatural being created humankind.”

This, along with other efforts in 2011, followed the 1982 “balanced treatment” law, which required schools to teach both “creation science” and evolution but was struck down by the Supreme Court in 1987. And last spring, the University of Louisiana at Lafayette clarified legal questions related to prayer in public school at its annual legal conference.

The Attorney General’s report is the most recent guideline in a history of the state’s efforts to ensure the limits of constitutionally-protected freedoms are made clear.

Interested in more national news? We've got you covered! See More National News
Previous Article RESCHEDULED: The Hayride’s 2018 Truth And Consequences Tour Opens In Shreveport Feb. 22.
Next Article I Only Got One Boudreaux & Thibodeaux Joke For Y’all…