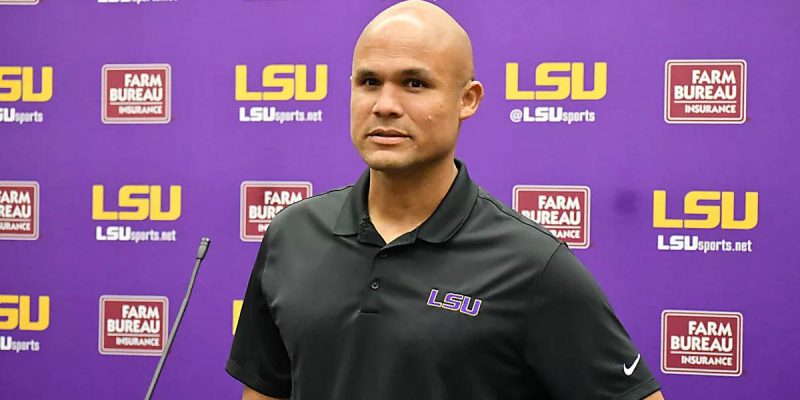 …to Texas A&M? At least that’s what the Houston Chronicle is reporting, with language strongly indicating Aranda has said yes to a truckload of filthy lucre.

The Aggies are in the process of fishing Dave Aranda away from Baton Rouge, La., to replace another coordinator from LSU, John Chavis, according to multiple people familiar with the process. Aranda could be announced as soon as Wednesday as Chavis’s replacement.

New coach Jimbo Fisher has had his sights set on Aranda, who’s fielded solid defenses in recent seasons at Wisconsin and then LSU. Reports surfaced out of Baton Rouge on New Year’s Day that Aranda had spurned an offer from A&M, but Aranda was simply trying to get past the Citrus Bowl against Notre Dame behind the Tigers – and perhaps more money from A&M.

Aggies are hoping Aranda has more success at A&M than Chavis, who might wind up as Arkansas’s next defensive coordinator. Chavis never came close to duplicating the success he had at LSU and Tennessee before that, and A&M allowed at least 42 points in five of 13 games this season, including a 55-52 loss to Wake Forest in the Belk Bowl on Friday.

LSU is 12th in total defense this season, while A&M is 78th. Aranda, 41, was a college roommate of Texas coach Tom Herman at California Lutheran, and Aranda is a former University of Houston linebackers coach and Texas Tech graduate assistant. He’s expected to retain defensive line coach Terry Price from the previous staff of Kevin Sumlin, fired in late November following a 7-5 regular season.

The rumors about the offer to Aranda are mind-boggling – as in, more than $3 million per year on a five-year guaranteed contract, plus total control of the Aggie defense. If that is in fact what’s on the table then it would be hard for any assistant coach to turn down.

But Aranda has already turned Texas A&M down once. That happened last week in advance of the Citrus Bowl, when he spurned an offer from new Aggie head coach Jimbo Fisher. Now something else is on the table, which would appear to be considerably more money.

College Station, Texas is 360 miles from Baton Rouge, meaning it’s within the 500-mile radius specified in Aranda’s contract to govern the size of a buyout he’d owe were he to leave. Aranda has two years left on his LSU deal which pays him $1.8 million per year, so it would cost $1.44 million in buyout dollars to pry him away from the Ole War Skule. We’ve already seen, given Fisher’s 10-year, $75 million contract, that money is no object for A&M when it comes to paying coaches; they’re doing everything they can to turn college football into a modern-day 17th century Dutch tulip bubble and hastening the inevitable economic crash in college sports.

The question is whether Aranda will participate, or tell Fisher and Aggie athletic director Scott Woodward, “Go home. You’re drunk.”

Why might he do that? Well, the problem with that much money is it tends to rob you of your mobility. At $3 million per year, Aranda likely has to take a pay cut to move up as a coach – he’s already far more highly-paid than the average NFL defensive coordinator, and at the price being discussed in College Station no pro team will touch him. That’s said to be the next job he’s interested in. But Aranda might also have interest in being a head coach. LSU’s rather outlandish current figure is intended to deny all but the higher tiers of Power 5 conference schools access to him as a potential hire. At $3 million he’ll be making a salary higher than all but the most highly-paid Power 5 head coaches, and it’s going to price him out of the picture for even jobs like Colorado, Arizona, Pittsburgh, Iowa State, Texas Tech or Syracuse – the kind of programs likely to hire an assistant without head coaching experience as a head coach.

So Aranda would be settling in for a fairly long stint at Texas A&M if he took the defensive coordinator job. The guess is that isn’t what he wanted, which is why he turned the Aggies down initially. Obviously if this new reported offer is as large as it’s alleged to be, it’ll test those convictions.

For LSU this has to be an extreme annoyance given that A&M stole track coach Pat Henry with a larger offer a decade or so ago, and John Chavis following the 2015 season. It’s exceedingly poor business to up the ante on a coordinator to some $3 million per year, but on the other hand allowing Aranda to leave to a division rival sends the message that LSU is more or less a farm team for that rather bizarre wannabe military academy with all-male cheerleaders one state over – something which would be the source of a major affront to the school’s pride.

And naturally the stakes are already quite high on Aranda given that keeping him around was seen as a non-negotiable requirement during the 2016 head coaching search, the ultimate product of which was Ed Orgeron getting the job. Critics of the Orgeron hire would note that the identity of the defensive coordinator for a truly excellent head coach is a far more low-profile subject, and programs possessing truly excellent head coaches wouldn’t be very concerned about losing even a coordinator as talented as Aranda because it would be assumed his replacement would be just as good – the head man would make sure of that. With a shakier head coach one depends on having great coordinators in order to put a good product on the field, and that’s an inherently unstable situation since coordinators are so frequently moving up to head coaching jobs.

And while we’re enmeshed in Aranda Limbo, LSU is also awaiting the outcome of the Matt Canada drama on the other side of the ball. Canada is assumed to be out of a job now that the season is over, though what form his departure will take is still unknown; the latest rumor had him a candidate to take over as the offensive coordinator at Rutgers, which would be a considerable pay cut from his LSU salary.

So if Aranda were to go, it would mean Orgeron would be breaking in new coordinators on both offense and defense, while also hiring a special teams coach to replace the mishmash of coaches sharing those responsibilities last year, plus new coaches on both the defensive and offensive lines. That’s an awful lot of turnover within one year of his hiring, particularly when Orgeron was supposedly going to offer LSU some continuity of some of the good things Les Miles brought to the program.

The LSU fans among our readers are excused for their instinct toward panic at this point. As we’ve said, there is little reason for confidence this won’t all go to hell very quickly.