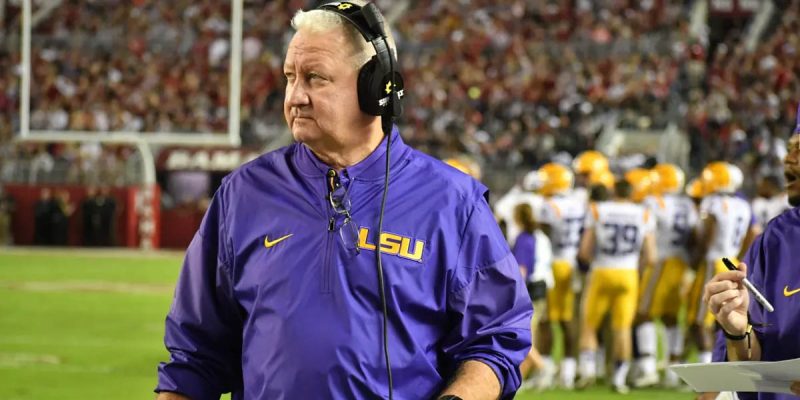 That’s the word coming from Ross Dellenger at the Baton Rouge Advocate, citing multiple sources as saying Ensminger will be named as the offensive coordinator later this week barring something unforeseen.

The makeshift mattress in Steve Ensminger’s office could get more usage than ever in 2018.

Ed Orgeron plans to hire the former LSU quarterback and longtime assistant as his offensive coordinator, barring any last-minute snags, multiple sources confirmed to The Advocate. The move is not yet final but is expected to be complete in the coming days.

LSU officials reached Monday could not confirm the report.

Ensminger is expected to work alongside current consultant and longtime NFL receivers coach Jerry Sullivan, who is expected to be elevated to have a significant role in the offense. His exact title is unclear, but he is likely to have a heavy hand in the Tigers’ passing game.

Ensminger would replace Matt Canada, who after one season split with the school in a mutual financial agreement signed Friday. Canada will receive about half of the $3.3 million remaining on his contract, settling with the school to end a somewhat messy 12-month marriage.

Ensminger, 59, is experienced and many laud his ability as a game planner and playcaller. Orgeron raves about his work ethic, too, revealing on several occasions that Ensminger often sleeps in his office on a mattress set up on the floor.

This isn’t a move which will be well-received by LSU’s fan base, which has been pretty vocal in its desire for a marketable name with a flashy resume to replace Canada. Among the coaches bandied about as potential candidates were New Orleans Saints quarterbacks coach Joe Lombardi, Saints wide receivers coach Curtis Johnson, South Florida offensive coordinator Sterlin Gilbert, Oklahoma State offensive coordinator Mike Yurcich, West Virginia offensive coordinator Jake Spavital, Atlanta Falcons offensive coordinator Steve Sarkisian and former Ole Miss head coach Hugh Freeze. In fact, Freeze was the subject of a column by the New Orleans Times-Picayune’s Ron Higgins identifying him as a hire that would signal LSU’s commitment to develop a high-octane offense, and hiring him would, in Higgins’ words, give LSU “a coordinator who understands there’s no such thing as scoring too many points.”

The rumor mill says Freeze was considered but was rejected by the LSU administration as too hot to handle after putting Ole Miss on NCAA probation and being forced to resign after it was disclosed he’d called hookers on an Ole Miss cell phone. There were internet reports to the effect that Gilbert had been interviewed over the weekend but no confirmation was ever made – in fact, there is no confirmation any interviews were had at all for the position before Ensminger was chosen.

The choice is peculiar on a couple of levels. First, Ensminger was on record as not wanting the job on a permanent basis – he’d been quoted to that effect last year when he was the interim offensive coordinator. It’s almost unheard of to hire a coach for a job he expressly does not want, and yet that’s what Orgeron has done here.

Second, one wonders if Orgeron – whose 9-4 first season as LSU’s head coach included a pair of losses (Troy and Notre Dame) in which coaching decisions and staff management were significant if not dispositive issues – has enough political capital to make a “comfort” hire for so important a position. Ensminger might be the right man for LSU’s offense, but Orgeron’s hold on the head coaching job at LSU is anything but firm. If this goes badly the chorus of “I told you so’s” from the fan base and perhaps also the program’s major donors will drown out all other sounds. Given all of that, conventional expectations would indicate Orgeron would be looking for the most aggressive hire he could make to replace Canada rather than reaching into his own staff.

All that said, Ensminger’s offense averaged more points and yards per game during the time he was offensive coordinator in 2016 than Canada’s did with somewhat similar personnel. He’s had success as an offensive coordinator in spots in the past, though that past isn’t recent. And with the report also indicating the elevation of Sullivan to a full-time staff position LSU would be adding a verifiable wide receiver and passing game guru with a deep and varied background in the NFL (Sullivan’s stops include San Diego, Detroit, Arizona, Miami, San Francisco and Jacksonville between 1992 and 2016); if what Orgeron wants is a pro-style offense he can at least expect to have one of the better wide receiver coaches in the NFL to help his passing game. In fact, if the reports are true that Sullivan would be taking over the wide receivers while current wide receivers coach Mickey Joseph would move over to coaching tight ends, Orgeron would be able to claim that three of his five offensive assistants have NFL coaching backgrounds (offensive line coach James Cregg and running backs coach Tommie Robinson also have coached in the league).

Sullivan has a reputation as a high-energy coach with a great rapport with players, which might seem counterintuitive given that he’s 73 years old – an age which isn’t common among college coaches. How that will translate onto the recruiting trail will be an interesting question, though LSU looks fairly well set at wide receiver with Texas Tech transfer Johnathan Giles, who had over 1100 receiving yards and 13 receiving touchdowns in 2016, and five-star recruit Terrace Marshall of Parkway High School in Bossier City coming aboard next year (and another five-star recruit in Rummel’s JaMarr Chase reportedly likely to sign with the Tigers next month). Talent to work with won’t be an issue for Sullivan in the near future.

The Ensminger-Sullivan move could work out fine this fall, and if it does Orgeron will be able to claim a lot more credibility than he currently has with the fans and donors. But for an internal “comfort” hire, it’s definitely a risk and it won’t be well-received by the fans. With a brutal schedule including an opener in Dallas against the Miami Hurricanes, road games at Auburn and Florida and home dates with both national championship game participants Alabama and Georgia, and the necessity of breaking in brand new players at quarterback and running back, Orgeron needed to shore up fan confidence and he isn’t doing that here.

Get ready for lots of offseason grumbling around the LSU program. We’ll find out next fall if it’s warranted.

UPDATE: An interesting post on an LSU message board by someone claiming insider status (we’re under the impression this one might be credible, as we’ve heard some of what’s below through our own sources)…

This post will hopefully shed some light on this entire situation.

I usually get restless on my flights and find myself browsing your boards when im not posting on 247.

The severe lack of information on this board is what convinced me to write this up for you all.

This is the timeline of the events that transpired.

Steven Ensminger was offered the OC position, and declined. Orgeron set his sights on Briles, and was shut down before he could get the words out of his mouth.

I know because I work alongside the men and women who donate thousands to this great University.

Gilbert was never interviewed. Gilbert was contacted and before anything, asked to bring his own staff in. Orgeron said no. And that was that for Gilbert.

I certainly have no idea where that Gilbert rumor stemmed from if not from this board. I caught wind as it made its way to 247. It was confusing.

Orgeron contacted Lane Kiffin with the approval of Alleva and offered him the same contract as Dave Aranda and was turned down, but not without Kiffin basically planting the briles idea into his head.

Briles would be the last attempt at an OC.

Ensminger accepted the position after being told that they were turned down by the other prospects (the prospects being Lane and Briles).

This process took quite awhile because Ensminger was on the fence about the position.

There is no “Its taking forever, its not Ensminger”. Not even Ensminger wanted the OC to be Ensminger. He was in a sense taken advantage of.

The divide in this administration is catastrophically bad. It was awful during the Miles break up , but we have reached an entirely new level. Multiple rag tag loose cannons have been let go for false information leaks. Some of which are backed by the side that does not want Ensminger.

It is much too late for that. Ensminger will lead the offense , and Orgeron will have a hand in the running game. The passing game will not be handled by Orgeron.

Dave Aranda has a few intersting marks in his contract. He cannot entertain an SEC school until 2020. Period. He was given a HCIW tag as well (meaning he will be the first person evaluated and interviewed in the event Orgeron leaves). Orgeron is well aware and expects him to stay on staff.

Most of us up here dont expect Coach Orgeron to make it to 2019. Not with how the boosters are reacting. Much like you all. Defeated and depressed.

Well. Thats it for my first post. The layout for TigerDroppings is much better than any other board ive been on. I will probably stick around with you guys.