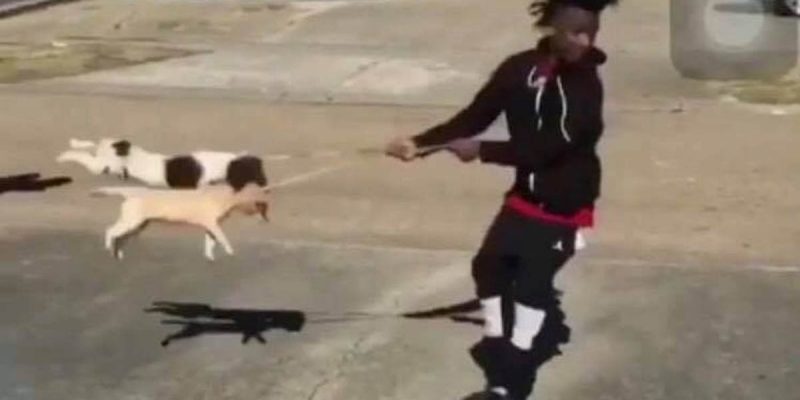 …because Johnson, a Baton Rouge juvenile court judge, has now issued a challenge to the 19th Judicial District Court’s Trudy White for the title of Worst Judge In Louisiana.

We can say this because Johnson is the judge who very peculiarly refused to issue a warrant in that ugly case of the 15-year-old caught on video brutalizing dogs by swinging them in the air from leashes as though he was competing in the hammer throw at a track meet.

To say that law enforcement is furious about this would be a bit of an understatement. Here was WAFB-TV’s report on the case last night…

Naturally, there is no reason given by Johnson for why she’d reject a warrant for an obvious case of animal cruelty captured on video for which the perpetrator’s identity is not in question. It’s difficult to imagine what Johnson would offer as a justification for refusing the warrant – nobody is asking her to pronounce judgement on the case; only to let the investigation result in an arrest.

And the case isn’t complicated. Yes, one might wonder why the Iberville Parish Sheriff’s Department is involved in the case, but that’s only because initially it was thought that the video was shot in St. Gabriel before investigation determined it was actually in Baton Rouge. It then turned into a joint investigation between the Iberville sheriff and the East Baton Rouge Sheriff’s Office, with Baton Rouge district attorney Hillar Moore getting involved.

If you want to let your imagination run a little and ask whether Johnson might know the perpetrator and/or his family and that’s why she refused the warrant, you’re welcome to – we haven’t seen any evidence that’s the case.

What we can say is that Pamela Johnson has been a disgrace to the bench for a very long time, and the legal community in Baton Rouge has regarded her as a joke since the 20th century.

We can start back in 2000, when Johnson was brought up for charges to the Louisiana Supreme Court after the Judiciary Commission of Louisiana found that she’d falsified names as “stakeholders” for a federal drug court grant of people who hadn’t agreed to have their names included, and also that she’d authorized court employees to go to non-work-related retreats in Sandestin on the taxpayers’ dime.

Naturally, the Supreme Court did what it usually does with bad judges and bailed her out…

With regard to Charge I, the record indicates the federal grant application was prepared on an expedited basis at the direction of Judge Johnson by an employee of the Department of Juvenile Services who had experience in such matters.   The employee listed the names of persons on the grant application who had attended or were invited to previous juvenile task force meetings, although it later turned out that some of these persons did not give permission for their names to be used.

We conclude any mistakes made in connection with the grant application were made in good faith.   While Judge Johnson may have been negligent in failing to contact the persons listed in the grant application to verify their agreement to participate, we cannot say the Commission proved by clear and convincing evidence that her actions rise to the level of ethical misconduct.

Turning to Charge II, the record establishes that on three separate occasions in 1995 and 1996, Judge Johnson authorized court employees, including her minute clerk and the court’s receptionist, to attend educational seminars which were not specifically related to the job functions performed by those employees.

Although Judge Johnson unquestionably exercised poor judgment in allowing court staff to attend these seminars, we find it is significant her actions occurred shortly after she first assumed the bench, suggesting her decisions were the product of inexperience.2  She has acknowledged her error, and has taken steps to avoid similar problems in the future.   Based on these findings, we conclude the Commission has failed to prove by clear and convincing evidence that Judge Johnson’s actions rise to a level warranting official discipline by this court.

A juvenile court judge in East Baton Rouge Parish, La., has been publicly censured by the Louisiana Supreme Court but the justices rejected a recommendation to suspend her without pay for 60 days.

On a 6-to-1 vote, the high court took the action for Judge Pamela Taylor Johnson’s refusal to conduct hearings for ten juveniles who would have been affected by the closing of a drug treatment center she helped open. The treatment center is no longer in existence.
The treatment center was set up in 1999 with more than 500-thousand dollars in state and federal grants, which also were used to establish a juvenile drug court. That court also has been disbanded.

The dispute over the hearings occurred after the Supreme Court appointed a retired Orleans Parish juvenile court judge, Salvadore Mule, to oversee the administrative functions of the East Baton Rouge Parish Juvenile Court.

The Louisiana Judiciary Commission, which investigates complaints of judicial misconduct, also accused Johnson of failing to timely sign judgments in about 35 child support cases and generally failing to cooperate with Mule. The high court dismissed those two charges, saying there was not enough evidence to support them. But, the court said Johnson’s refusal to conduct the hearings as requested by Mule violated the Code of Judicial Conduct.

In a dissent, Justice Jeffrey Victory said all three charges against Johnson were proven. Victory backed the Judiciary Commission’s recommendation for a 60-day suspension.

Johnson assumed the juvenile court bench on January 1st, 1995, to fill a partial term. She won six-year terms during elections in 1996 and 2002.

Perhaps Victory was right, because in 2012 Johnson sprung a teenager accused of aggravated rape of three different five year olds…

The mother started asking questions in the apartment complex. She says she found out there could be two other five year old victims. She called the East Baton Rouge Sheriff’s Department and all three boys went to police counselors. Shortly after that, deputies issued an arrest warrant for the 13-year-old boy.

The rules in juvenile court are much different than that of State District Court.

For example, the identity of a defendant under the age of 15 will never be known. So had the victim’s mother not come forward, this incident would have gone largely unknown to the public. However it’s what happened inside the courtroom that has her so upset.

According to the mom, Juvenile Judge Pamela Johnson released the accused teen into the custody of his grandmother, who lives in the same complex as the victims.

“He’s like, traumatized. He’s like, mom they’re back, he’s out, he’s come back here? And it’s kinda pretty hard on a five year old,” said the mother.

According to the mother, the teen has been charged with three counts of aggravated rape. She tells WAFB that she found out that he admitted to the charges. “The boy admitted to doing that to the little boys,” she said.

That case was a little chilling in its current context, seeing as though it’s a similar problem – an obvious threat to the community Judge Johnson is simply not interested in addressing.

So what we’ve got is a complete joke of a judge, who consistently draws opponents when she comes up for re-election but wins anyway because she’s a “pillar of the community” by way, at least partly, of her husband being a local and national NAACP honcho and the couple being deeply embedded among the Southern University hoi polloi, and who consistently inflicts crime on the black community in Baton Rouge by refusing to impose consequences on the worst juvenile offenders.

That kid swinging those dogs around is almost assuredly going to kill somebody if he isn’t made to turn his life around. Refusing a warrant to do something about him insures nothing will happen until he does something far more serious, and then his victims will be human beings.

Johnson isn’t doing any favors for anybody by refusing to do her job – least of all the people who keep voting her into office. Isn’t it time they recognize that?

Interested in more news from Louisiana? We've got you covered! See More Louisiana News
Previous Article F. King Alexander Op-Ed Says He Can’t Do His Job Unless You Pay More Taxes
Next Article ERSPAMER: Louisiana Pols Don’t Need More Of Your Money – They Need To Keep Their Promises