…which comes off as a perfect example of a politician preening for the media, if not Edwards abjectly glomming onto the actions of others in search of credit.

From the Times-Picayune, here was the governor demanding that the PSC mandate utility companies lower rates in Louisiana as a function of their federal tax rate dropping from 39 percent to 21 percent…

Gov. John Bel Edwards asked the Louisiana Public Service Commission Wednesday (Jan. 3) to look at lowering utility rates for state residents and businesses now that utility companies won’t have to pay as much in federal taxes.

Edwards, a Democrat, said current utility rates have been set based on utility companies having to pay more in federal income taxes than they will under a new tax plan Congress recently approved.

Since the law drops federal income tax rates considerably for utilities, the utility rates should be reworked to reflect the lower costs for companies, according to Edwards. The governor said Dominion Energy has already announced a rate reduction in South Carolina for that state’s residents.

“We hope to hear similar news from Louisiana companies as they carefully review the impact of the federal tax legislation on their bottom lines,” Edwards wrote in a letter to the Public Service Commission Wednesday.

Here’s a copy of that letter… 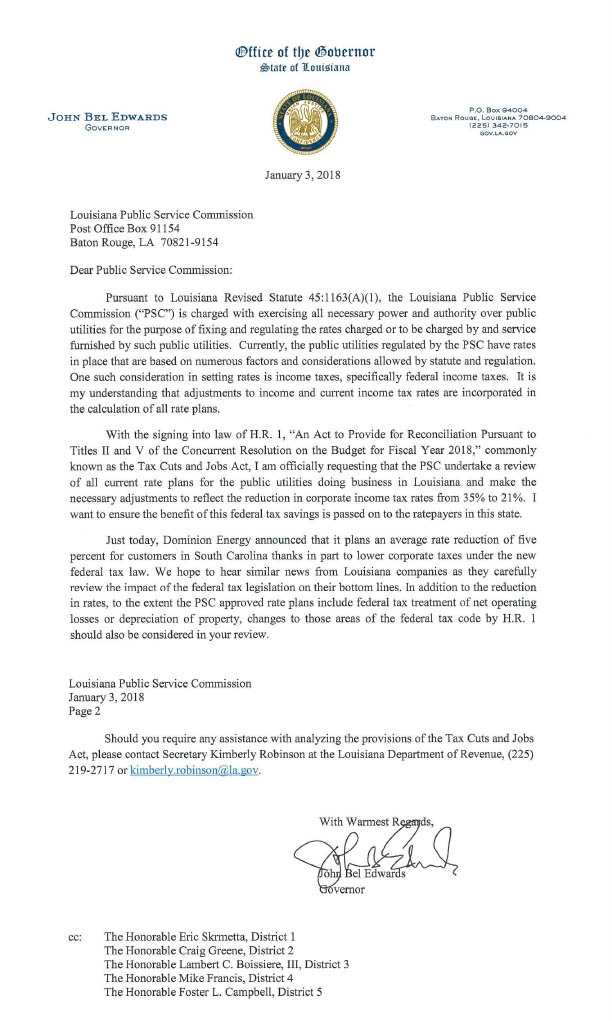 But PSC chairman Eric Skrmetta was a bit perplexed upon receipt of Edwards’ letter. After all, at the PSC’s December meeting they’d already took action on the potential rate effects of the tax reform bill’s passage – in fact, they’d commissioned a study to come up with a rate decrease figure before the tax reform bill had even passed.

This, obviously, was the subject of a letter Skrmetta sent to the governor yesterday… 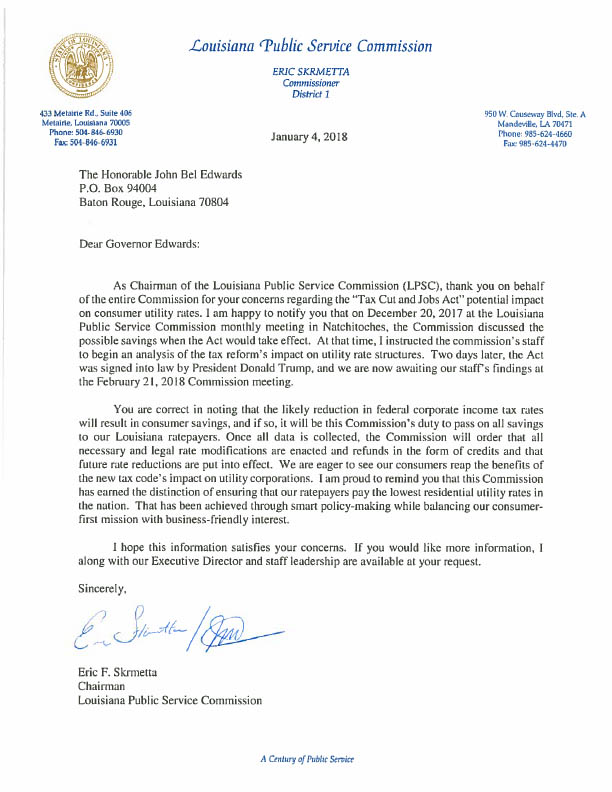 One of two things are true here – either Edwards shot his mouth off without knowing what the PSC was doing, which for an ordinary citizen might be excusable since the PSC’s activities are very much in the policy weeds and don’t generate a lot of attention but for a governor they’re less so, or he figured he could generate some publicity from a friendly, partisan media by posturing as a Defender Of The Public From Rapacious Utilities, and that nobody would pay attention to Skrmetta’s response.

And by the way, we already know this wasn’t Edwards’ idea, because his ally on the PSC Foster Campbell was already running off at the mouth about how the PSC was going to cut the rates as a response to tax reform.

Either way this is an example of precisely the kind of thing we can’t stand about politicians. Edwards’ letter to the PSC was wholly unnecessary – even if he hadn’t known the PSC was already working on a rate cut courtesy of the tax reform bill, he could have had one of his people pick up the phone and ask about it – and its tone was intended to generate publicity much moreso than good policy.

Skrmetta’s response was appropriate in its own tone – essentially saying “You’re late to the party, bro; go sit down and let the adults work.” But the media won’t treat it as such.

Nor will the media report that while Edwards is busy demanding the PSC impose rate cuts from the utilities, he also just released a list of demands for tax increases from the legislature which includes a four percent sales tax be imposed on business utility bills – we haven’t run the numbers on that, but it wouldn’t surprise us to see the majority of the users of electric and other utilities take a net loss in the event that tax is passed. That, of course, would paint the governor in a completely different light than the Defender Of The Public From Rapacious Utilities he’s trying to portray himself as.

It’s all fake. The question is how long he’s able to carry on with these kinds of cheap publicity efforts.