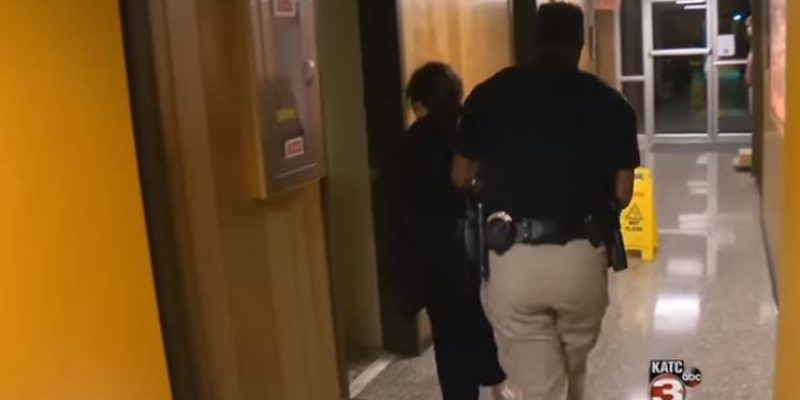 A little bit of backstory here.

On Monday night, I’m watching the National Championship game and noticing the Georgia Bulldogs are now the official feeder school for the Atlanta Falcons. During the game, I get a call to go check out KATC, my local TV station, online and catch what happened at the Vermilion Parish school board meeting.

I also went over to check the YouTube page of Chris Rosa*, the managing editor of the Abbeville Meridional, who frequently posts videos from the meetings. KATC’s video and Rosa’s video tell an interesting story.

Deyshia Hargrave, an English teacher at Rene Rost Middle School in Kaplan, was speaking at the meeting, asked to leave, and later arrested. That alone was enough to cause the story to go viral, nationally. BuzzFeed and The Hill carried it, and I wrote something about it over at RedState.

Rosa’s video has over 1 million views and was trending on YouTube. Not bad for a ten-minute video on a public meeting.

You really need to dig into the story to find out what really happened, however. Some details have been overlooked in national coverage in favor of the salaciousness of the headline.

This time, the president asked her to leave. As she was leaving, a city marshal escorted her out. In the hallway outside the boardroom, she ended up on her knees and the marshal putting handcuffs on her. She was taken outside, loaded into a police vehicle, and taken to jail, where she was charged with remaining where forbidden and resisting an officer. She bonded out, but neither the city prosecutor nor the school board formally pressed charges.

Since the scandal broke, the local teachers’ union held a meeting (with one hundred teachers in attendance) and the ACLU released a statement of support and the promise of an investigation. Both groups cited Hargrave’s First Amendment rights.

I get the feeling, from my admittedly limited knowledge of Constitutional Law, that the board was within its rights as a public body to ask her to leave, as she did violate its rules of order. The arrest, to my knowledge, was not ordered by the school board – none of the video seems to indicate it was. The Meridional’s coverage indicates that we don’t even really know if the marshal was told to escort her out or not.

Not long after her comments, Puyau began to address her questions while Hargrave stood. While this was going on, Reggie Hilts the school board security guard, approached Hargrave and told her to leave the meeting.

She tried to make her point to the security guard that she had the floor, and Puyau was giving her an answer.

Reggie replied, “You are going to leave, or I am going to remove you,” while putting his hand on his handcuffs.

It is not known if Reggie was told to escort Hargrave out of the room or he did it on his own.

If anyone is guilty of anything here, I believe it’s the officer, Reggie Hilts. He seems to be where the real issue started.

However, that’s not the conclusion other, alarmingly less-rational people drew. This follow-up from the Meridional shows that the school board is under heavy and incredibly extreme fire.

Starting early Tuesday morning, the phones at central office began ringing from people calling from all over the United States. They all wanted to speak to Puyau about the video they watched on the Vermiliontoday.com website, showing a Vermilion Parish teacher getting arrested by a security guard and being escorted out of the building in handcuffs.

Many of the phone calls almost had the secretaries in tears because of how mean the people were on the phone.

The threats got so bad, that all of the doors had to be locked and a sign on the doors instructed visitors to knock on the door to be let in.

If the ACLU follows through on its investigation, I do not believe they’re going to find Hargrave’s First Amendment rights were violated. She had her chance to speak, but violated the board’s rules of order. The board does have the right to set the rules to speak, but it’s only when the rules are too restrictive against public speaking that we get into First Amendment territory. I don’t think that particular line was crossed, however.

I do think the marshal was the guy in the wrong here, and it will be interesting to see what, if anything, happens to him after this. We’ll also see what happens to Hargrave, because if something were to happen to her job, then there’s the real scandal. I don’t think anyone is stupid enough to let that happen, however – she was Teacher of the Year at her school within the last few years and it would be a public relations nightmare for the board.

But, there is also a discussion to be had about public bodies and how much input they really allow from citizens (who are, more importantly, their voters). We do, at times, see these bodies restrict the public comment period. That’s a warning sign that something is up and the body is (usually) trying to deflect criticism. There needs to be enough active vigilance from citizens that, when their speech as a whole is starting to be curtailed, they start finding new people to vote into office and un-curtail it.

We don’t, frankly, have an active enough citizenry in the state to make that happen more, but we should, and it’s an utter failure on the part of many statewide activists and pundits that we don’t.**

*Full disclosure: Rosa hired me in 2012 to be the sports editor at the Meridional, and is still someone I regularly talk to, though usually about local sports as I occasionally freelance for the Meridional to cover Vermilion Parish football teams.

**The Hayride can’t do it alone, y’all. We try, but there has to be more effort put into actually motivating voters instead of just making money off them.

Interested in more news from Louisiana? We've got you covered! See More Louisiana News
Previous Article Louisianians Will Decide Who Makes The Best King Cake
Next Article Is LSU Football Falling Back Into The Dark Ages As The T-P’s Ron Higgins Suggests?