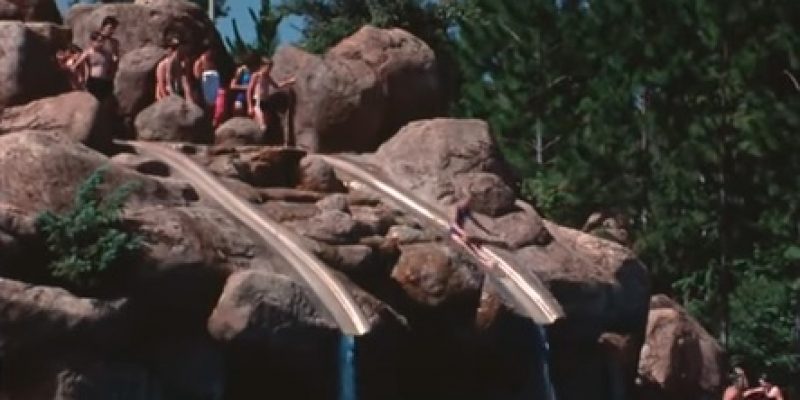 Walt Disney World opened in 1971 despite national economic uncertainty and gas rationing, which was prohibitive to traveling. In 1973 Disney’s share prices crashed by half in response to oil embargoes placed on western countries, including America. Disney still forged ahead, however, and developed the first themed waterpark in the world. In June 1976 it opened River Country, which literally made history.

Bring a swimsuit and a smile. You’re likely to wear both out, at River Country.

Built on six acres, the park included access to a bay and beach area for swimming, and a chlorinated water park/pool included white water rapids, raft rides, rope swings, beaches, and other water activities along a boardwalk and cypress swamp. Goofy, the park’s main mascot, would wear a swimsuit be found sliding past vacationers.

Despite its initial popularity, it was first closed in 2001, and permanently closed in 2005. Today the park still exists in a skeleton ghost form. Its waterslides are still standing near Bay Lake, not far from Disney’s Magic Kingdom. Its pools are still full of water.

Increased competition was one reason for its closing; SeaWorld’s Wet ‘n Wild opened in 1977, and Disney opened several other parks in the late 1980s. Others had to do with public safety and government regulations after deaths were reported in various Florida waters.

The deaths of several boys at River Country made national and international news. In 1980 a boy died from ingesting the deadly bacteria, amoebic meningoencephalitis, allegedly from River Country water. The bacteria is 95 percent fatal.

In 1982 a 14-year-old boy drowned after dropping into Bay Cove’s lagoon at the end ofWhoop ‘n Holler Hollow, and again in 1989 a 13-year-old boy drowned. During one court trial a Disney lifeguard testified that some times up to 75 people would need help after plunging into the lagoon. The conditions of the ride were dangerous and there were not enough accessible lifeguards on hand.

But by 2001, the Florida legislature enacted a law that would have been cost prohibitive for River Country to implement. The law required all waterpark facilities in the state to be chlorinated, prohibited the use of natural water bodies, and only allowed access to municipal water supplies for water park use.

In 2002 Disney left River Country to rot. An excellent summary of its demise can be found here. Its partially fenced-off areas have been the subject of many documentaries and videos of Disney’s policy to abandon, not demolish, used parks. Nearly everything is overgrown by vegetation. Before and after pictures can be found here.

Interested in more national news? We've got you covered! See More National News
Previous Article It Looks Like Opposing Coaches Will Wade Is Outworking Are Using Shill Reporters To Attack Him…
Next Article LSU: The NCAA Tells Us Pete Thamel Is Full Of Crap