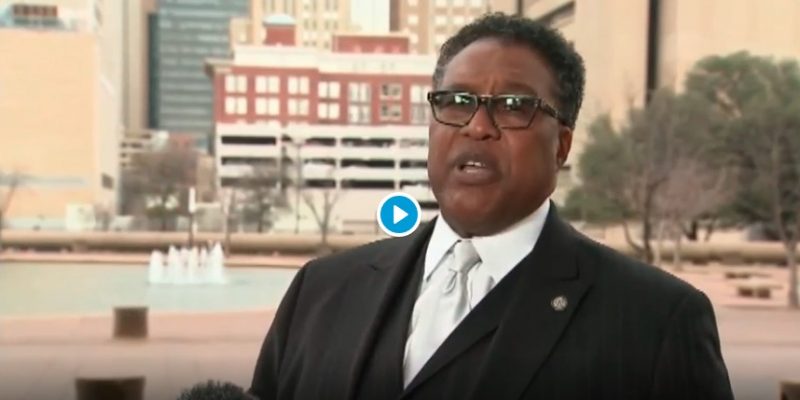 This May 4-6, the National Rifle Association (NRA) is holding its 147th Annual meetings and Exhibits at the Kay Bailey Hutchison Convention Center in Dallas and the city’s Mayor Pro Tem Dwaine Caraway is now saying they shouldn’t. Why?

First of all let me make sure it is very clear that I am a believer in the Second Amendment personally. I have five guns, one in my car. One in every room of my house. I am saddened by the fact that every time we turn around is some type of gun violence.

At the end of the day, we need to connect the dots, the NRA needs to step up to the plate and they need to show leadership. We should not allow people to possess assault rifles and weapons.

Those kids in Florida, they will have to live with these nightmares the rest of their life. Look at all of you out here. If you are ever confronted with a gun of any kind, an AR15 or just a gun, that is something that you will remember the rest you’re life and these 14 and 15-year-old kids, their lives are in tragic shatter.

While we are worried about terrorists, we’re living in a terrorist society amongst us Americans today. I applaud those children in Florida for standing up, and across America. It is time for them to stand up and for us to listen. And it’s time for Mr. Trump and for every elected official in Washington and in the United States of America on every level to stand up and begin to stand up and speak out against this type of violence.

The NRA responded that it has no plans on going anywhere. If the Mayor Pro Tem or anyone else wants to oppose it that they can expect protestors.

No politician anywhere can tell the NRA not to come to their city. Dallas, like every American city and community, is populated by NRA members. Our members work in fire stations and police departments. They save lives in local hospitals and own businesses in communities urban and rural throughout this country.

TMZ is alleging that since then Caraway has received threatening phone calls since he’s publicly opposed the NRA. He hasn’t backed down, and most recently argued:

It is a tough call when you ask the NRA to reconsider coming to Dallas, but it is putting our citizens first. Who needs an AR-15 to go hunting? Who needs an AR-15 to protect their house? They talk about mental illness. Yes, mental illness is an issue, but it’s not just an issue that should only be associated with guns. At the end of the day, we need to connect the dots. The NRA needs to step up to the plate and show leadership. Elected officials are receiving dollars from the NRA, and they’re afraid to set policy and to set necessary gun rules.

According to the Dallas Observer, Dallas resident Jonathan Herzog started the petition to prohibit the NRA from coming to Dallas. In the first three days, more than 34,000 people signed it.

Few City Council members agree with Caraway and the NRA is still coming to Dallas, so far. Holding its convention in Dallas will be the first time the NRA has done so since 2013 in Houston.

The NRA event will have on display exhibits from every major firearm company in the country. Attendees can book hunting trips, visit outdoor recreational exhibits, and view priceless firearm collections in its gun collector area. A range of displays of knives, wildlife art, shooting accessories, hunting gear, ATVs, and other clothing items and gear will be on display and available for purchase.

More than five million Americans are NRA members, and the number is growing.

Interested in more news from Texas? We've got you covered! See More Texas News
Previous Article Louisiana Ranked Worst State In The Country To Live
Next Article Nobody At The Capitol Should Ever Pay Attention To Anything The Advocate Writes, Ever Again