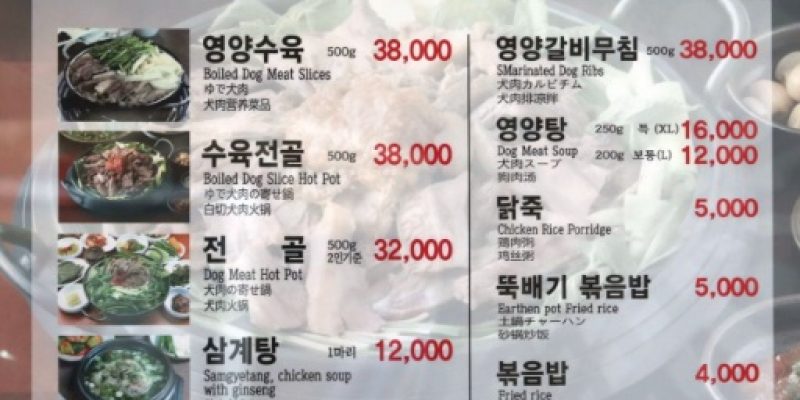 CAUTION: Some of the information about how dogs are killed for human consumption is brutal. NSFW or children.

Unlike puppies and dogs that are bred or adopted in America to become a human companion, pet, or service animal, in South Korea 2.5 million dogs are bred every year for human consumption. In other words, dogs and puppies are dinner.

Known as “gaegogi,” dog meat dishes are common and legal not just in Korea, but also throughout Asia. Mostly older people prefer dog meat because they think it has medicinal value.

Various news reports reveal that the Korean government offered to pay restaurant owners to not serve dog meat during the Olympic Games. The government also requested that restaurants remove any signs that advertised gaegogi meals.

Some of the athletes are speaking about the meat trade, hoping to raise awareness about the practice. Canadian figure skater Meagan Duhamel told USA Today Sports:

It is just sad because when the world is watching the Olympics little is known or spoken about the (Korean dog meat trade). There are hundreds of dog meat farms tucked away and nobody is talking about this. The buzz will be about the Olympics.

The concern for animal rights activists is not necessarily the fact that dogs and puppies are being eaten, but the inhumane way in which they are killed. Marc Ching, a Bay Area activist who founded the Animal Hope and Wellness Foundation, told USA Today Sports,

I am half Korean. Koreans are very proud of hosting the Olympics. Why this has to be tied to the Olympics is that the government itself is actually paying to hide this from the world. Maybe if … they just said ‘this is part of our culture,’ it would be different.

He describes how the dogs are killed:

In Korea they usually put a noose around the dog’s neck and take them out back, hang them and beat them. Another method is they just smash their head open. Sometimes they do electrocution. They shock them and burn them or de-fur them. With electrocution many times they are still alive. It is terrible.

To make the meat more tender, Koreans believe the dog needs to have an adrenaline rush. To increase adrenaline they torture and beat the dogs to death. Korean farmers argue that dogs are “livestock” and defend their right to pack dogs in cages.

USA Today Sports reports that a promanent Korean animal rights activist, Nami Kim, has sent more than 1,200 rescued dogs to the United States through her Save Korean Dogs program. Meagan Duhamel is one of several Olympians who has rescued a dog in South Korea.

Anyone can rescue a dog through savekoreandogs.org.