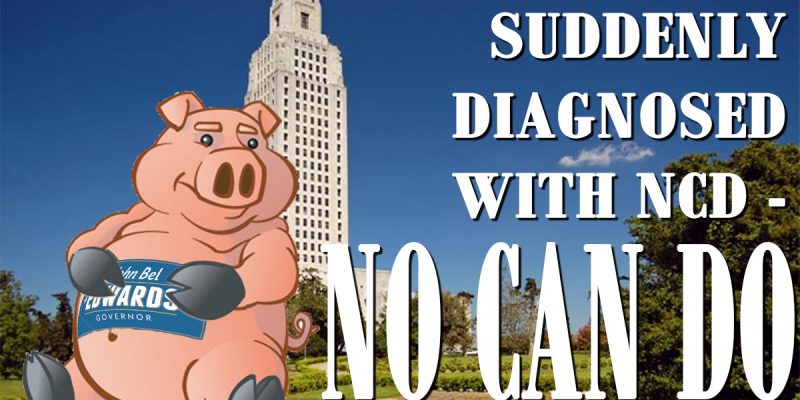 That seems to be the message the insiders at the state capitol are now telling the people, like Americans For Prosperity and the Louisiana Association for Business and Industry, who are pushing for Louisiana to adopt something like the Ohio Checkbook this year.

The Louisiana Checkbook idea was one of the conditions put forth by House Speaker Taylor Barras as prerequisites for any discussion of tax increases to resolve the current budget deficit. There is no defensible argument not to have such an asset, in which state and local government expenditures down to the penny are accounted for in a user-friendly transparency website form, with information that is easily understood and sharable on social media.

That there is no defensible argument, though, doesn’t mean there is no opposition. There is plenty of that.

We have a few items on this score.

Our readers already saw a summary of the Ohio Checkbook/Louisiana Checkbook portion of the LABI Annual Meeting Thursday, in which Assistant Commissioner of Administration Randy Davis addressed the issue by essentially saying once the Division of Administration finishes spending almost $120 million of your money putting all the state agencies on LATRAC, the terrible facsimile of the Ohio Checkbook which contains none of its user friendliness and nowhere near a level of detail required to determine whether tax dollars are being wasted or not, then maybe updating LATRAC to look something like the Ohio Checkbook might be possible. More on that here. But the official reaction is exactly what you’d expect it to be.

Edwards told the business organization at its luncheon that he doesn’t oppose the concept.

“There’s not an objection from me,” he said. “We just need to make sure we can do it in a reasonable fashion.”

But Commissioner of Administration Jay Dardenne, the governor’s chief budget adviser, said the idea also isn’t as easy as it seems — or as the Louisiana Checkbook promoters suggest.

He said Louisiana needs every state agency on the same accounting and financial management computer system, an ongoing project that started under former Gov. Bobby Jindal’s administration and has cost the state about $100 million so far.

Dardenne said that work will cost another $26 million to finish, money he’s requesting from lawmakers, and won’t be done until 2021. He said that work dovetails with planned improvements to a Jindal-era government spending website called LaTrac that he said will offer the sorts of searchable information that Republicans are seeking.

“This is somewhat of an issue that’s not really an issue,” he said. “There absolutely does not need to be legislation. We’re doing it anyway. And we’re going to continue to do it. We don’t want legislation that is duplicative or trying to reinvent the wheel here.”

Got that? They’re all for having the Ohio Checkbook in Louisiana, but first they’ve got to finish blowing through another $26 million on the current Yugo of a website (after already blowing through $90 million on that project). And for Pete’s sake they certainly can’t be saddled with state legislators meddling in what they’re doing.

When they’re going to those legislators with demands that they authorize a billion dollars in tax increases. This year. Or else they’ll have no choice but to sell all our senior citizens and handicapped children for scientific experiments. And you’ll have to trust them that none of the $30 billion in the state’s proposed budget will be wasted – because John Bel Edwards and Jay Dardenne say so.

Somehow the in-crowd has their hooks into Barry Erwin, the president of the Council for A Better Louisiana (CABL), on this issue. During Erwin’s appearance at the Baton Rouge Press Club today Erwin was asked about the Ohio Checkbook being adopted in Louisiana and here was him singing from Dardenne’s hymnal…

Here’s the pertinent fact about this: it cost the Treasurer’s office in Ohio $800,000 to build the Ohio Checkbook. It took 18 months to debut the site from the inception of the project.

They spent $800,000. We’ve spent $90 million and need basically another $30 million before we can complete – by 2021, mind you – a crappy, outdated and non-user friendly website in Louisiana attempting to do the same thing Ohio is succeeding in doing.

But Edwards and Dardenne and the gang are all definitely on board with that level of transparency.

This is a level of dishonesty and forced incompetence that can only be described as malice.

The other excuse discussed above by Dardenne, that the state agencies all have to be put on the same accounting system before there can be a Louisiana Checkbook, is similarly bullshit. I talked to the people from Ohio about that very question Thursday and they told me OpenGov, the vendor they used to expand the Ohio Checkbook to include all that state’s local governments (the treasurer’s office in Ohio built the state portion of the Ohio Checkbook in-house), was able to negotiate around that issue and they’re having few problems putting those locals which operate the most rudimentary accounting programs possible onto the Ohio Checkbook. Anything that could be downloaded into a Microsoft Excel spreadsheet, they say, is integratable into the Ohio Checkbook and could be into a Louisiana Checkbook.

OpenGov, whose website can be found here, has been trying to sell Louisiana’s Division of Administration on building the same product in this state for a year.  They’re confident they can handle what this state’s government has and can export that data into a Louisiana Checkbook site.

It’s obvious these people don’t want the level of transparency the Louisiana Checkbook would provide. It’s also obvious they know they can’t come out and say it. They’d rather pretend we’re too stupid in Louisiana to do something like this.

That’s why we’re treated to this, in an interminable post filled with lies, nonsequiturs and personal attacks, from Edwards lackey Lamar White at The Bayou Brief…

Never mind that Louisiana already has such a website; it’s too “clunky.” Ignore the fact that the non-partisan organization United States Public Interest Research Group ranks our state’s current website seventh in the entire country, praising “Louisiana as a ‘leading state’ in offering an easy-to-use website and providing data on an array of expenditures,” as Devon Sanders of LSU’s Manship News Service reported only two weeks ago in The Daily Advertiser.  And pay no attention to the fact that it will take years before it could even be operational. Louisiana Checkbook, we are told, will help us finally solve our budget woes by shining a brighter light on wasteful government spending.

Waguespack is so confident, he already scooped up the domain.

You’d be hard-pressed to find someone who is opposed to transparency in government spending, even here in Louisiana. But it’s impossible to ignore those who have lined up alongside LABI to market this proposed website as if it is some kind of panacea. Suffice it to say, some aren’t exactly known for their commitment to good government.

Take for example, John Kay, the director of Louisiana’s chapter of Americans for Prosperity, an organization that spent upwards of $200 million in “dark money” for the purposes of influencing the 2016 election. The day before LABI’s luncheon, Kay appeared on Shreveport’s KEEL radio to pitch the website and extol the importance of transparency.

In addition to Americans for Prosperity, LouisianaCheckbook.com also boasts the support of a predictable roster of industry lobbying organizations. Among others, there’s the Louisiana Oil and Gas Association (LOGA), LAmmonia (Louisiana Ammonia Producers), the Louisiana Chemical Association, a few regional chapters of the Chamber of Commerce, an organization that calls itself Coalition for Common Sense (which lobbies in support of restricting access to the judicial system), and the Orwellian-named Solutions through Science (which is operated out of the same small office as the Coalition for Common Sense and lobbies on behalf of the chemical industry).

Again, transparency should be always be a priority, and here on The Bayou Brief, we feature an entire section dedicated to stories about ethics and transparency in government. But it is clear that, when lining up his usual suspects of supporters for any given cause, Waguespack didn’t completely think through the implications. Almost immediately after pitching Louisiana Checkbook, people began asking him, on Twitter, whether the website would include tax exemptions for the industries for whom he lobbies. He didn’t respond to the question until it was put to him directly, in person, during LABI’s luncheon.

The “people” asking Waguespack about tax exemptions are the usual leftists. That was predictable, and predictably dishonest – those tax exemptions are a lot easier to find in our current transparency format than who’s traveling to Washington Mardi Gras for carousing and cavorting on the taxpayer dime. Which is the point of the Louisiana Checkbook in the first place.

But no, our supposed betters tell us. This will be a lengthy process, and it will be expensive, and by asking for it you’re deflecting from the necessity of paying an extra BILLION DOLLARS in taxes to support a state government which can’t deliver for $120 million what Ohio can deliver for $800,000.

And if you respond with distrust and a perception of malice, then it’s you who’s the problem. Not them. You should just meekly shut up and fork that billion dollars over.

In case anybody cares, I was on Talk 107.3 FM this morning with Bill Profita and Kevin Gallagher on this subject. Listen to the segment here.