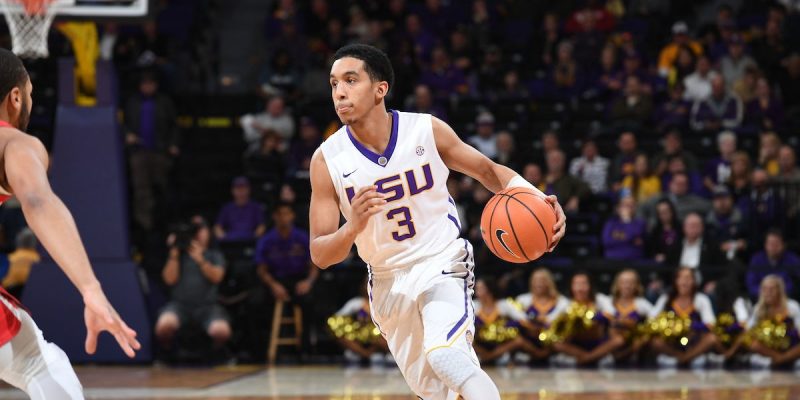 …because the performance Will Wade and the Tigers put together on Tuesday in an 88-78 win over Vanderbilt was significant. LSU is getting pretty close to being worth discussing as a postseason tournament team thanks to a 16-11 record and a 7-8 SEC mark with three potentially winnable games left on the schedule.

But before we get into that, let’s have some entertainment. How about Tremont Waters’ highlight reel from the Vanderbilt game?

Waters has had some ups and downs like any freshman, particularly one being asked to do as much as he’s doing, inevitably will. Sometimes his outside shot leaves him and he sometimes struggles against opponents who can put an athletic taller guard on him to contest his jumpshot. That said, he’s one of the most electric players in all of college basketball and he’s a joy to watch.

It’s not unreasonable to see him play and think that if he’s willing to stay through his junior or senior year before taking the plunge into the NBA draft, and at maybe 5-11 he doesn’t have the height the league is looking for even in point guards (that’s not to say he can’t play in the NBA, it’s to say his stock from a draft standpoint is always going to be hindered by being under six feet tall) he’s going to get a lot of advice to stay in school a while, that as Waters matures and Wade puts some high-level pieces around him, this is the kind of floor general who can lead a team to a championship – conference or otherwise.

Against Vanderbilt he showed he’s a star. Later in his career you’ll see that more consistently from him.

LSU beat Vanderbilt without getting much help from Duop Reath, who was hobbled by an ankle injury. Reath played only a few minutes, so in his stead Wayde Sims, who was last written up in the Hayride for the dumb decision to appear in a rap video where marijuana was prominently featured, turned in a career-best performance. That was far and away the best Sims has looked in an LSU uniform, and it was a pleasure to watch him as dialed in as he was. Team that with Skylar Mays, who is playing like a star of late, and a strong outing with Aaron Epps who is a living testament to the capability of this coaching staff to develop players given his improvement over the course of this season, and suddenly LSU is a fun team to watch.

Saturday they’re in Athens to take on Georgia in a rematch of a game earlier in the season at the Maravich Center the Tigers lost by 1. That was one of the team’s poor performances of the year and a game LSU should have won. In that respect Saturday’s game might be analogous to Tuesday’s win over Vanderbilt; LSU played poorly in their first matchup with the Commodores and lost a winnable game in Nashville. A duplication of Tuesday’s performance on Saturday could get LSU to 8-8 in the SEC and 17-11 overall, and at that point we can begin seriously talking about the postseason.

But Tuesday this team assured themselves of a winning season. LSU can go no worse than 16-14 for the regular season, and even should they lose in the first round of the SEC Tournament they’d be 16-15 as a worst-case scenario. It’s conceivable they could get a postseason bid at 16-15 and lose in the first round of the NIT or CBI to finish 16-16, but we’ll go out on a limb and say that’s not going to happen.

What needs to happen to get LSU to the NIT? Probably two more wins, which would get LSU to 18, should do it. Winning two of the three between Saturday’s tilt with Georgia, the road game at South Carolina next Wednesday and next Saturday’s season finale at home against Mississippi State would put LSU in the NIT even with a first-round SEC tournament loss; it would also give LSU a 9-9 conference record for the season which would be a huge accomplishment for a team picked last in the SEC by a consensus of the coaches and media. Even at 8-10 and 17-13 overall LSU might still be an NIT team; they’d want to get a win in the SEC Tournament to make sure.

Is it crazy to keep NCAA Tournament dreams alive? Not completely, but a little realism goes a long way here. LSU doesn’t need to make it to the Big Dance for this team to have accomplished something meaningful, and the fact is they don’t really have the look of an NCAA Tournament team personnel-wise. Waters has been terrific, Epps, Sims and Mays have made major improvements, Reath has become a pretty capable college big man despite some limitations (let’s face it, for a 6-10 guy he’s one of the worst rebounders we’ve ever seen, but his low-post offensive game has developed really nicely) and Daryl Edwards has turned in a pretty solid season after transferring in from junior college.

All that said, this is a terrible rebounding team. They needed Jeremy Combs, who came as a senior transfer after being an all-conference player at North Texas, to be a garbage man underneath and a force on the boards, and Combs’ ankle, which plagued him at UNT, simply never came around enough that he could contribute. The fact that 6-9 freshman Mayan Kiir came in lacking physicality and basketball IQ, then got himself in Wade’s doghouse and ended up on what the coach called a “leave of absence” with his future status in the program up in the air, and 6-6 forward Galen Alexander similarly got himself run off after playing almost no minutes at all this year, meant that three players thought to be able to help this team with rebounding and interior defense contributed exactly zero. So this team is razor-thin inside and gets routinely crushed on the glass. It’s such a pronounced problem that even in a game they won comfortably, that being the home win over Texas A&M, LSU got outrebounded 50-30.

And in the Vanderbilt game another missing piece to this team was glaringly obvious. When the Commodores’ Riley LaChance kept draining one three-pointer after another in the second half to keep Vandy in the game, it pointed up the fact LSU doesn’t really have that defensive stopper on the perimeter all good teams have. Edwards is a game defender and Randy Onwuasor will give good effort, and Mays isn’t a terrible defender (he’s got active hands and gets his share of steals, which isn’t bad), but Wade doesn’t have anybody he can bring into a game with the knowledge that the other team’s top shooter will be null and void. Think Garrett Temple from the 2006 Final Four team, and what he did to Duke’s J.J. Redick in the NCAA Tournament. LSU doesn’t have that piece this year.

But despite that, this team has seven Tier One wins, which is an amazing number. They beat Michigan and Houston, they beat A&M and Arkansas twice and they beat Missouri last Saturday. That’s a resume which says this team can’t be completely dismissed as an NCAA Tournament team. And despite the missing pieces this team has shown itself capable of going on a torrid hot streak to bury an opponent in a flurry of three-pointers and easy looks under the goal. LSU shot 75 percent from the floor in the second half against Vandy, for example, which insured no matter how hot LaChance got it wouldn’t matter.

If they can continue that pace or something like it, it’s not unrealistic to think this team could beat Georgia, South Carolina and Mississippi State, all of whom have been offensively challenged for much or most of the year. And if LSU does that, you’re looking at a regular season record of 19-11 and 10-8 in the SEC. That latter number might all by itself get LSU into the tournament; it would stand to reason that everybody who has a winning record in the SEC this year will be an NCAA tournament team, as good as the league is this year. Again, adding a win in the SEC Tournament to get LSU to 20-11 might be enough. Winning two, which might be a little too much to ask, would put LSU at 21 wins, including at that point a seven-game win streak, and surely that would be enough.

Again, though, it’s too much to put on this team, whose play has been enjoyable this year mostly because they’ve not been burdened with expectations. They’re really here to put a stamp on the program and establish a standard of play, and for the most part they’ve done that.

Next year, though, the sky is the limit. Bringing back Waters, Mays, Sims, Edwards, Brandon Sampson and Brandon Rachal, getting 7-footer Kavell Bigby-Williams, who we understand is regularly wearing out Reath and Epps in practice, and then adding four Top 50 national recruits in 6-9 Naz Reid, 6-7 Emmitt Williams, 6-7 Darrius Days and 6-4 point guard Javonte Smart, means next year could be the best roster LSU has ever had in basketball – with an outstanding, maybe even elite, coach in charge.

It’s been a fun year already. It might be even more fun before it’s over. LSU basketball might be the best thing going in Baton Rouge right now.

Interested in more news from Louisiana? We've got you covered! See More Louisiana News
Previous Article Billy and Ruth Graham’s Coffins Made by Louisiana Inmates
Next Article ERSPAMER: There Is No Excuse For Not Cutting State Spending