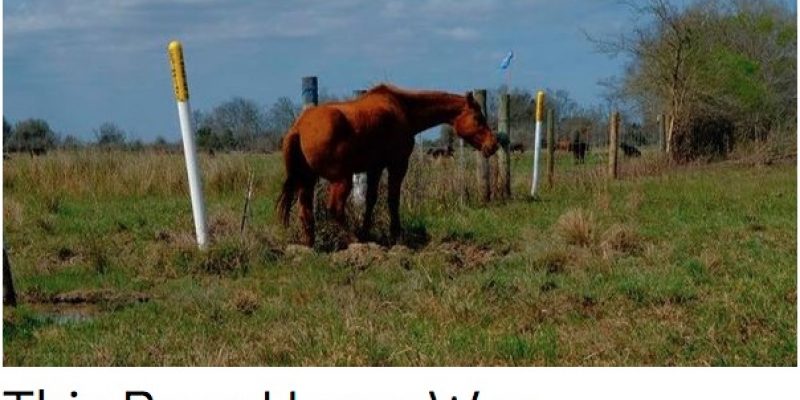 A Louisiana group, L’eau Est La Vie Camp (No Bayou Bridge), began a petition to stop Energy Transfer Partners (ETP) from constructing the Bayou Bridge Pipeline, and is demanding that Davis Parish Sheriff Ivy Woods investigate ETP for animal cruelty. Its Care2 petition is claiming that ETP is guilty of negligence and animal cruelty after members of the group rescued a horse trapped in barbed wire on the proposed construction site.

However, ETP argues that the image of the horse they are using in their campaign is false.

The petition, http://www.care2.com/go/z/BarbedWire, has received more than 78,000 signatures.

No Bayou Bridge members state on the petition:

From the looks of it, workers had cut the barbed wire and knocked over the fence on an easement in Jeff Davis Parish to perform a task. When finished they just packed up and left, leaving local livestock, like our friend here, to become entangled in ETP’s sloppy and incompetent ways.

“You can even see Energy Transfer Partners’ easement flag behind the horse,” it states, referring to a photo of the horse that is posted on the petition’s page. It adds,

This is what happens when you bring in so many out-of-state workers. They do not have the connection to our lands, waters, or families as Louisiana workers would. That way ETP can ignore general good-neighbor practices, such as simply closing a fence behind them.

The group opposes the Bayou Bridge Pipeline for several reasons, including a negative environmental impact on the Atchafalaya Basin and threats posed to drinking water for the Houma Nation and other citizens.

The petition states, “We need to send a clear message to ETP that their sloppy construction practices will not be allowed and must not continue. Our water, and our lives are at stake.”

Its signature count has nearly reached its goal of receiving 80,000 signatures.

the claims on this petition are absolutely false. The owner of the horse was present when we installed our H brace for this fence, and was very happy with our work. The photo shows a right-of-way that is not of our pipeline. Our pipeline right-of-way is approximately 65 feet away from this area. The unlawful lengths that the protestors willing to take to stage these photos and spread false claims is concerning.

A spokesperson from ETP added,

If this is true, why are the activists posting a misleading picture on their petition? And, why are they lying about a horse caught in barbed wire? It seems like there is no animal cruelty after all and that much ado about nothing could result in a lawsuit against a group making false claims about a horse that isn’t even on ETP pipeline property.