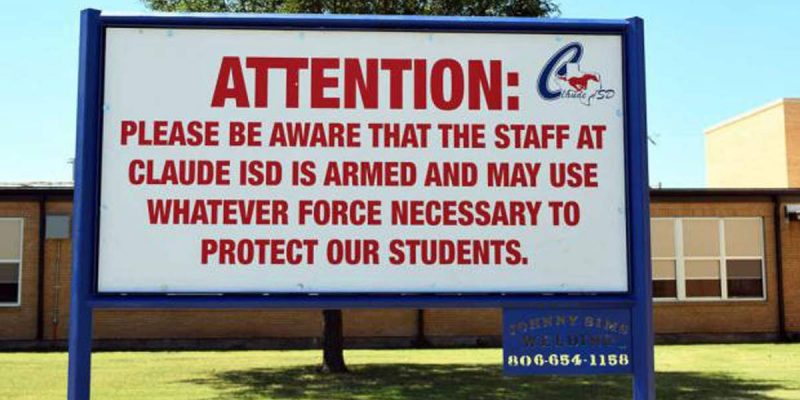 Just east of Amarillo in the northern panhandle of Texas is the tiny town of Claude. Its school district has had no issues with gun violence, and doesn’t plan to, because its staff and teachers are armed.

Claude Independent School District (CISD) “are reportedly among the last places a mass murderer would want to target,” a local news outlet reports. Most of its administrators are Second Amendment advocates who maintain that highly trained teachers with concealed carry permits are best positioned to prevent any kind of shooting in their district.

CISD began its staff’s concealed carry plan more than a year-and-a-half ago. Conceal carry staff are required to practice at a shooting range once a month and also train with officers from the Armstrong County Sheriff’s Office and Department of Public Safety.

In addition to arming its staff, signs are posted on public school property that read:

ATTENTION: PLEASE BE AWARE THAT THE STAFF AT CLAUDE ISD IS ARMED AND MAY USE WHATEVER FORCE NECESSARY TO PROTECT OUR STUDENTS.

CISD Superintendent Brock Cartwright told KFDA-TV, “Mainly – if we can locate the person and try to keep us safe at the same time – when the DPS and officials get here, we back off.”

One parent told the local news,

It makes me feel really, really safe that we have staff on hand if anything happened. It brings me peace of mind. I don’t know who carries, but I do know that if they’ve taken that dedication, they’re going to do everything in their power to keep our kids safe – even if they’re in harm’s way. So, what can you ask for more than that?

“To put it mildly, staff, students and parents feel much safer with [CISD] teachers who pack heat and signs warning any would-be shooter,” TheBlaze reported. “Students also said they have no reservations about their safety at school knowing there are teachers around them ready to act if push comes to shove.”

Interested in more news from Texas? We've got you covered! See More Texas News
Previous Article INSANE: This TX License Plate Sold for Almost $35K
Next Article Celebrating Texas Independence Day, Where Everything in Texas is Quite Literally Bigger [videos]