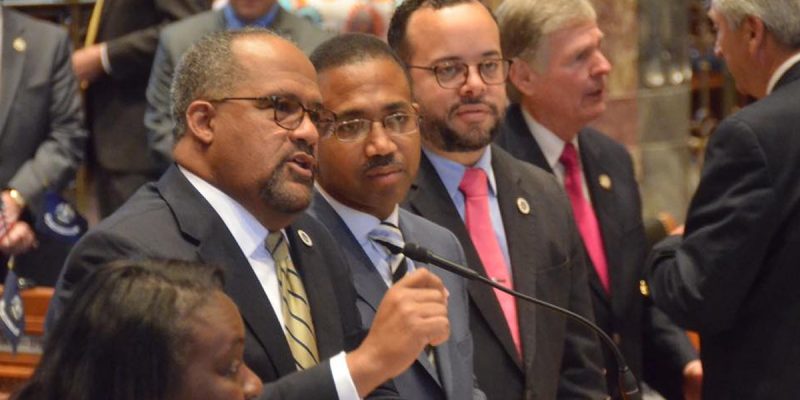 Friday, the National Rifle Association’s Institute for Legislative Action put out a bulletin about gun-related bills filed for this year’s Louisiana legislative session, and there’s something we noticed about the current spate of gun-grabbing bills.

Namely, that almost all of them are coming from an interesting source – that being the Legislative Black Caucus.

This isn’t all that odd. Across the country, for some reason the most aggressive gun-grabbers always seem to be Democrats representing African-American constituencies.

That persists despite the fact that (1) the cities those politicians come from tend to have fairly, if not highly, restrictive gun laws and massive violent crime rates involving guns nonetheless, which would indicate those gun laws don’t work, (2) the history of gun control laws is absolutely replete with racism, and (3) in many if not most of those constituencies the police are feared and the citizenry operates on a hair trigger waiting for the next Philando Castile, Mike Brown or Alton Sterling fiasco to generate civil strife over police brutality – so why it would seem a good idea to disarm the public and leave the supposedly racist, lawless cops as the only people with access to guns is a bit hard to explain.

Common sense, after all, dictates that of all the people who need guns it’s probably the law-abiding black homeowner living in a dangerous neighborhood who is most justified in going around accoutered. And yet that homeowner is represented by people who would leave him or her at the mercy of crooks who don’t obey gun laws and/or cops who see him or her as a potential criminal.

House Bill 277 /Senate Bill 274, sponsored by Rep. Denise Marcelle (D-61) and Sen. Troy Carter (D-7), respectively, prohibits the sale of commonly owned semi-automatic rifles to any person under 21 years of age.  This legislation punishes law-abiding citizens for the evil acts of criminals, does nothing to increase public safety and will prohibit law-abiding 18-20 year old adults from purchasing the most popular and effective self-defense rifle on the market.

House Bill 400, sponsored by Rep. John Bagneris (D-100), establishes a 10-day waiting period for the purchase of a firearm and makes violation of the waiting period punishable by as much as five years in prison.

House Bill 473, sponsored by Rep. Patricia Smith (D-67), bans the importation, manufacture, sale, purchase, possession, or transfer of bump stocks and other “rapid-fire” devices.  The broad and overreaching language could potentially criminalize firearm modifications such as competition triggers, and ergonomic changes that are commonly done by law-abiding gun owners to make their firearms more suitable for self-defense, competition, hunting, or even overcoming disability.

Senate Bill 185, sponsored by Sen. Wesley Bishop (D-4), eliminates the authority of state laws over local ordinances and regulations.  Firearm preemption laws ensure that fundamental rights are not diluted or distorted through local ordinances and prevents a confusing patchwork of regulations which make it difficult for otherwise law-abiding citizens to follow the law.  Further, citizens in one city deserve the same rights and powers as citizens in the neighboring town.

Senate Bill 155, sponsored by Sen. Troy Carter (D-7), prohibits the sale of any weapon to any person under the age of 21 years old.  Again, this type of legislation does little to increase public safety and only impacts the rights of law-abiding adults.

Senate Bill 231, sponsored by Sen. J.P Morrell (D-3), allows for the surrender of firearms and arrest of individuals, not based on a criminal conviction or mental adjudication, but based on false positive background checks or third party allegations and evidentiary standards below those normally required for removing constitutional rights.

Senate Bill 383, sponsored by Sen. Troy Carter (D-7), establishes a system to track all ammunition in the state for use in a firearm.  This invasive legislation will allow for the state police to track who is legally purchasing ammunition, along with how much and what kind of ammunition is purchased.  This database will only divert valuable state police resources by having to maintain this database and taking away from actually improving public safety.

In addition, there’s one bill filed by someone who isn’t a Black Caucus member but who represents a heavily black New Orleans district…

House Bill 603, sponsored by Rep. Helena Moreno (D-93), bans commonly owned semi-automatic rifles and forces law-abiding citizens to either surrender their firearms, or register and apply for a license annually in order to possess their firearm.  This broad legislation does little to improve public safety, adds to the burden of state police, and further attacks the rights of law-abiding citizens.

Mind you, none of these bills are going anywhere. Louisiana is not a state where gun-grabbing legislation gets far. These are vanity bills designed to get the filer noticed by the right left-wing groups for trying to “do good in the community” by making it harder for honest citizens to acquire and bear arms. The foundations and the special interests call the tune, and these guys dance for all they’re worth.

But why they’d want to do that is a question worth asking. Are they really representing their constituents pushing these hopeless and stupid gun-grabbing bills, or are they just takin’ orders from The Man?

Interested in more news from Louisiana? We've got you covered! See More Louisiana News
Previous Article Let’s Understand That The Louisiana Legislature Will Not Have To Cut The State’s Budget In This Session
Next Article The Hagiographic Piece On Mitch Landrieu Yesterday Is The Worst Thing Ever To Appear At POLITICO