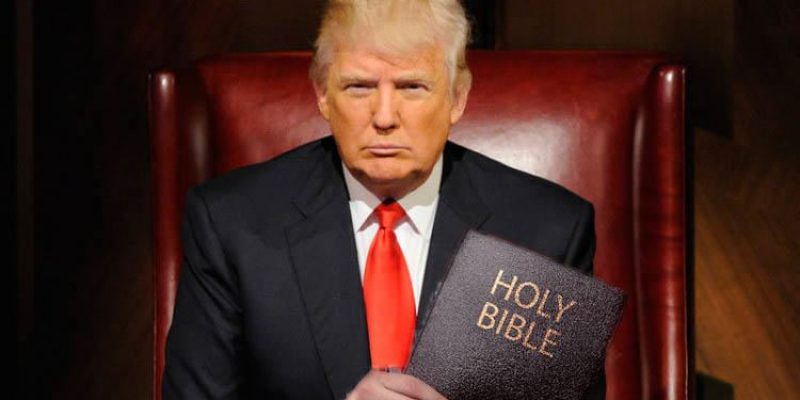 David Brody and Scott Lamb’s latest book, “The Faith of Donald J. Trump, A Spiritual Biography,” published by Harper Collins, is an absolute joy to read.

It chronicles the history of the 45th president’s faith in two parts. The first takes the reader down memory lane, following the footsteps of Trump’s grandparents and parents to understand the cultural and religious influences that shaped his Christian worldview. The second focuses on Trump’s more recent statements about God, faith, forgiveness, and personal relationships with Christian leaders. It details interviews with Trump during and after his successful presidential campaign, controversial statements, and Trump’s ability to bridge denominational and racial divides.

Easy to read, Brody and Lamb synthesize centuries of history in several pages, highlighting the characteristics of Protestantism that influenced the cultural and spiritual upbringing of Trump’s family. Trump’s forefathers were greatly impacted by the Protestant Reformation in Germany (his father’s) and Scotland (his mother’s). Their faith shaped their commitment to a strong work ethic, integrity, and honesty, which influenced several generations.

Trump’s mother emigrated from Scotland to New York City when she was 18 years old, having been heavily influenced by Presbyterianism. The authors list five ways in which Scottish Presbyterianism impacted his mother, Mary Anne MacLeod, and the United States. (It was an absolute delight to read their review of this era having lived and walked along the same path as the Reformers in Scotland and Switzerland myself.)

The church in which Donald J. Trump was raised, First Presbyterian Church of Jamaica, Queens, is the oldest continuously active Presbyterian church in the Western Hemisphere. The authors point out that Trump was raised in a church with “rich history of vibrant biblical Christianity and sacrificial love for America.” They also delve into the controversial splits within the Presbyterian denomination.

Trump’s father, Fred, was of German Lutheran descent. His grandparents and extended family were driven, ambitious, and self-assured. Their Lutheran faith connected a strong work ethic to acts of charity and they were proud to be Americans. Having immigrant parents, Trump also grew up with his immigrant cousins, who the authors describe as having “melted successfully into the pot of American culture.”

Trump’s great aunts, who attended Glad Tidings, were part of a movement in New York City through which thousands of people heard the gospel announced through amplifiers and pledged to “purge the city of some of its sin.” They introduced him to a different worship style than that of Presbyterianism.

And his father’s and his relationship with Norman Vincent Peale of Marble Collegiate Church also shaped Trump’s faith. The authors emphasize the importance of these men in Trump’s life, as well as the role of Billy Graham. Trump regularly listened to Billy Graham with his father, either the “Hour of Decision” radio program or the “Billy Graham TV Classics” television broadcast. This “lesson” time also contributed to Trump’s love for Southern Gospel music.

The second half of the book addresses questions raised about Trump’s understanding of salvation, the Bible, and Christian beliefs. Throughout the book the authors relay conversations Trump had with Christian leaders, his openness to hearing suggestions, his many questions, and a personal journey, which the authors describe “changed dramatically.”

One of the more noticeable changes was observed during deliberations to choose a vice presidential candidate. They write that, “According to those intimately involved in the vice presidency deliberations, Trump genuinely wanted a deeply religious man as his number two, thus revealing something about Trump’s deeper, inner-core beliefs: faith matters to him.”

The book is peppered with examples of Trump’s acts of “unseen kindness.” One attributes Trump helping an Iowa small businessman to “the Judeo-Christian principle of help and charity.” Others describe Trump’s genuinely heartfelt empathy expressed towards survivors of natural disasters, and his humble demeanor when interacting with Black and Hispanic leaders.

From his remarks at the Great Faith Ministries International in Detroit to those at the International Church of Las Vegas to other churches throughout America, Trump’s message was clear: he was going to defend the Christian faith in America. He was going to unite Black, White, Hispanic, and other Christian Americans, declaring that, “Christian faith is not the past but the present and the future.”

Along the way, life-long Democrats who got to know Trump came to respect and support him. Not only at Trump’s Inauguration did he have a Black Bishop give the benediction but he also had the first Hispanic Evangelical leader pray at a presidential inauguration.

In sum, the authors point to specific qualities Trump possesses to caution the reader not to judge the authenticity of his faith. They write, “Donald Trump has two qualities that give one encouragement as one negotiates what to make of his faith: respect for the God of the Universe, and a desire to draw closer to Him.” The president regularly seeking prayer and spiritual guidance is one I have often heard myself from pastors who spoke with, guided, and prayed with him.

Without giving too much away, Brody and Lamb point to a faith journey of the 45th president that reflects the God of the Universe working in mysterious ways. They identify what everyone they talked to claimed — the God of the Universe raised up Trump to defend the Christian faith in a political climate that persecutes it. And, he is doing so by bringing a diverse group of people together.

The book is a fascinating read, encouraging, and a helpful reminder to Christians of their heritage, which encompasses a purpose far greater than one man’s faith.

Interested in more national news? We've got you covered! See More National News
Previous Article Today Is “Do Or Sine Die” Day In The Louisiana Legislature
Next Article UPDATED: The St. George Effort Has Returned To Baton Rouge