St. George is back, and this time it’s personal.

Not really, but this morning the St. George incorporation effort, in which citizens of the unincorporated southern part of East Baton Rouge Parish are attempting to create a new city, is back. The St. George advocates posted this video at their Facebook page a few minutes ago…

The St. George, Louisiana website is also back up and updated as well. Here’s what the About section says…

The City of St. George was born from the effort to create a local independent school district in the southeastern part of East Baton Rouge Parish. The character of the opposition to that effort set in motion a larger discussion among grassroots citizens dissatisfied by the quality and cost of services from the City-Parish governance model in East Baton Rouge Parish, the quality of the institutions that the governing elite created, to particularly include the K-12 educational system, and the disparity in political influence enjoyed by the people of the southern part of the parish.

We represent more than two-thirds of the parish’s tax base, but only about one-third of its expenditures, and the area which will be the City of St. George has never produced a Mayor-President of Baton Rouge in modern times. An initial petition to incorporate the southeastern part of East Baton Rouge Parish began in 2013. The incorporation effort lasted until the summer of 2015 when the petition fell 71 signatures short of putting the City of St. George on the ballot for the citizens to decide. Since then, we have witnessed the further decline of our public school system, skyrocketing murder and crime rates, further decay of our Parish infrastructure, unprecedented exodus of our friends and families from the Parish, and a complete lack of trust in our City-Parish leadership.

After our initial effort to create a city, we were told that things would improve; we were told that we would have a voice; we were told that we are “Better Together.” These were false promises that instead were manifested into ridicule and mockery against those that believed in the vision of the City of St. George. We have re-emerged now with vigor to give the citizens of the proposed City of St. George a voice and to give them hope. We are simply a group of grassroots citizens who once again have decided to take a stand. Sign St. George for a better Baton Rouge. You can join us by clicking here.

The new effort looks like it’s a little less ambitious than it was for the first shot at creating the new city. The St. George website says the population estimate this time is 86,316, down from 107,000 last time. What we’ve heard is they’ve cut out parts of the old proposed St. George map in which petition signings were poor last time – largely in the Gardere section of southwestern East Baton Rouge and St. Jean Vianney in the southeastern corner of the parish. 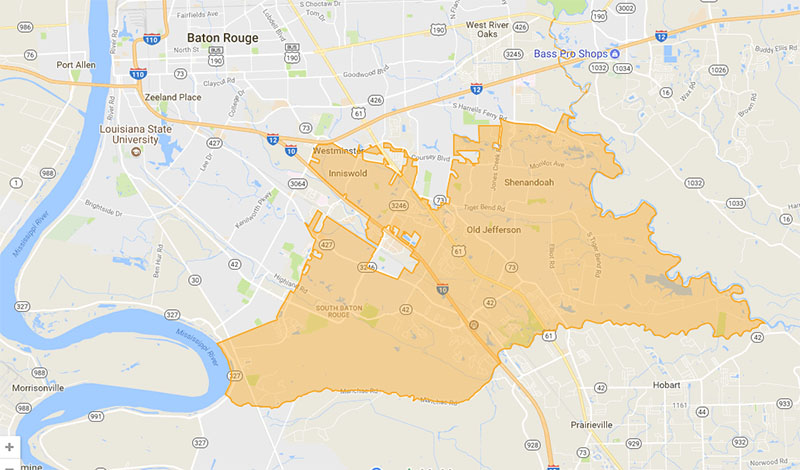 It’s going to be fun to watch this new effort unfold. The Powers That Be in Baton Rouge fought it with everything they had last time, and only barely killed it. We’re told that if the St. George committee simply got the people who signed the petition last time to sign it again they would be well above the new number they’ll need to hit without the 19,000 or so people – about 2/3rds of them are registered voters, on the average – counting against the necessary signatures.

And with a different mayor-president in charge of East Baton Rouge Parish and a bit less confidence in the parish’s leadership, sentiment for St. George might well be stronger.

But we’ll see. What we do know is St. George is back, and it’s going to be interesting.

UPDATE: We wanted to make sure to include the Gary Chambers meltdown in reaction to St. George when it happened, and we didn’t have to wait long.

“St. George” folks dropped an interesting video today. Mayor Broome, city leaders, and most importantly citizens of this community the answer is simple on this St. George issue. Let the facts remain true, creating a new city and claiming that will save our parish is a lie. The choices of those THEY elected help with the decline of this community. They have the majority on the council and therefor they have had equal control of the destiny of this parish. The truth is, too many of the people who support the “St.George movement” are simply not interested in a city that is majority black. For many of them, the idea of blacks being the majority, and in control of leadership is scary. Their solutions are fabricated with lies, because a new city WILL raise taxes. A new city, will hurt this parish not help it. The reason a new city won’t help the parish is the same reason Central, Baker, and Zachary haven’t helped the parish.

Guess what? If the kids in EBR schools aren’t doing better, that still hurts a “St. George” city. Because they can’t build a Trump border wall and keep people out. All of our issues will remain our issues if we don’t fix the root problem which is inequity. Nearly all the problems we have stem from inequities. There is data to prove that, on so many different levels.

I encourage you all to be vigilant and ready, because if we are really going to save this community killing the “city of St. George” effort has to be a priority.

Mayor Sharon Weston Broome says she is “steadfast” in her opposition to the renewed St. George incorporation effort, which was filed earlier today, and will “not stand for any effort to tear our city apart.”

Rather than aggressively fight the movement, however, Broome says she will concentrate on addressing the systemic problems facing the community.

“While I am not ignoring this, I believe one of the remedies is staying focused on the goals I have set before me: economic development in disinvested communities, eradicating blight, traffic remediation,” she says.

Interested in more news from Louisiana? We've got you covered! See More Louisiana News
Previous Article Must Read: The Faith of Donald Trump, a Spiritual Biography
Next Article Now They’re In The Louisiana House Voting On Whether To Raise Your Taxes