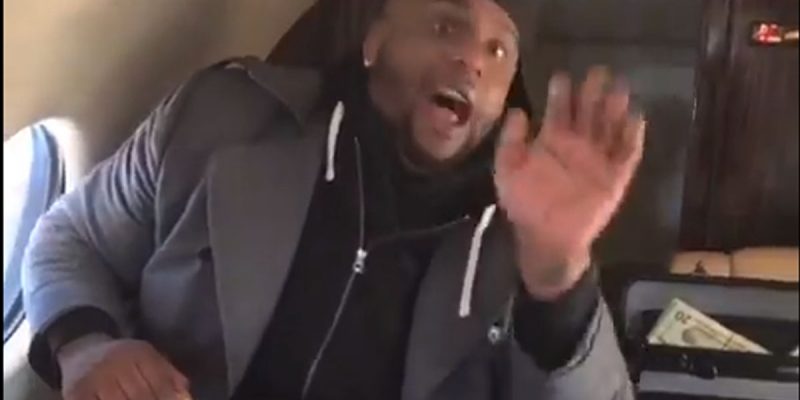 I gotta tell y’all – I ain’t never seen a damn thing like the video which came out over the weekend with former LSU and NBA star Glen “Big Baby” Davis eatin’ Popeye’s chicken on a private plane with a big stack of cash denyin’ – well, not really denyin’ – that he got caught dealin’ weed.

Here’s the video. It’s one for the ages.

Must be cold on that plane.

Which seems like a surprise. The way he fills that cabin up – this ain’t exactly one of your bigger private planes, yo – you’d think it’d be warm in there. But he looks like he’s dressed for the South Pole. Or at least Boston.

So where all this comes from is Friday, Big Baby got himself arrested…

Glen “Big Baby” Davis, arguably the most entertaining player on the Celtics 2010 Finals roster, was arrested in February on seven counts of marijuana possession and distribution.

Davis was staying at a hotel in Aberdeen, Md. on Feb. 7; when the hotel owner picked up the oh-so-familiar scent of weed coming from Davis’s room, he knocked on the door. According to the police report obtained by WMAR, Davis told the owner to “Fuck off,” and refused to answer the door, prompting the owner to phone police. In the police report’s “statement of probable cause,” the responding officer wrote that when they arrived, the hotel owner gave the police permission to enter the room Davis was staying in. WMAR reported that police said Davis also provided written consent to search his room.

The police discovered a quarter-pound of weed, about $92,000 in cash, and a ledger that cops believe lists names and amounts of money owed by those people for said weed. Through his lawyer, Davis maintained his innocence when contacted by WMAR.

That led him to get arrested for seven counts of possession and distribution of Miss Mary Jane.

Now – if you’re a big former NBA star who had an eight-year career in the league, you probably can say your 92 grand came from a whole lotta jumpshots.

What you might not be able to say is why your 92 grand is in a suitcase at a Hampton Inn and not in a bank where you can get at it whenever you want with a lil’ piece of plastic. That’s what most of us would do, whether we have gangster money like Big Baby’s got or not. People with 92 grand in a suitcase are almost always up to no good with that money.

The stoners at the Reno Gazette-Journal help us out with that, kinda…

So essentially, as a quarter of a pound of weed is four ounces of it, that’d be about the size of four of those bottles – each of which would be 28 joints. So Big Baby got caught with enough weed for a little over 100 joints. And from perusing the stoner message boards, you’re looking at about $600-800 worth of weed.

Honestly, he’s probably got a pretty good case for beating the distribution piece of these charges. He can say it’s his own weed and that his appetites are larger than us mere mortal type people. He’s 6-7 and 350 pounds or whatever, y’all – he probably smokes three times the weed you can, and afterwards he’s gonna mess up a whole lotta Popeye’s.

And that video? He probably ran up triple what his legal fees woulda been. Why, dude?