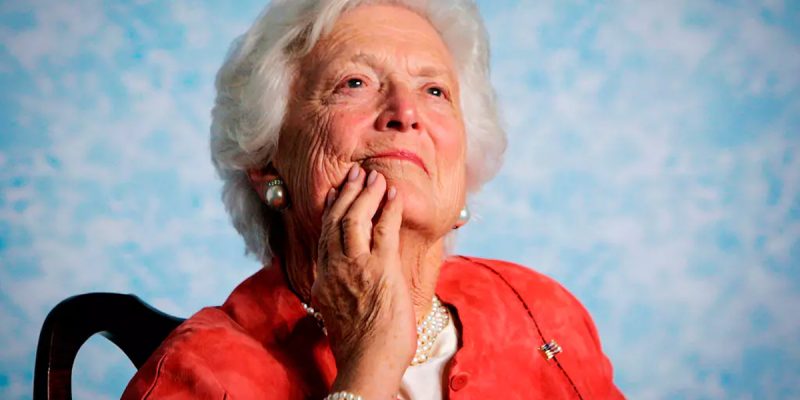 Former First Lady Barbara Bush was laid to rest in the small family plot adjacent to her husband’s presidential library in College Station.

Mrs. Bush experienced the rare high of seeing a husband and a son take the oath of office as president and the terrible pain of coping with the loss of a child to leukemia.

Unlike many western European countries, America does not have a monarch – that revered national figure who brings the country together.  The closest thing we have is a First Lady, the ceremonial goodwill ambassador to the country and the world.

While her daughter-in-law Laura sought to return First Lady to its previous non-partisan nature, the position had been redefined beyond recovery to what it previously was.  Michelle Obama, while not seeking to assert a “co-presidency” like Clinton, had no qualms about becoming a partisan figure, delivering slashing attacks against Republicans.

And thanks to the leftist media and entertainment industry, we’ve seen current and decidedly apolitical First Lady Melania Trump viciously ridiculed for her accent, appearance, and speeches in addition to being subject to a perpetual divorce watch by tabloid journalism programs and rags.

The devolution of First Lady in recent times and her style makes Barbara Bush that much more special.

With her trademark fake pearls, signature white hair and sincere candor Barbara Bush cut the profile of what a grandmother is supposed to look like.

And due to her son’s presidency and the good health she enjoyed, Barbara Bush remained a high profile figure long after she and her husband left the White House.

During the 2005 World Series, you could not miss her unmistakable hairdo from behind home plate at the Houston Astros’ home games at Minute Maid Park.

In 2015, the presidential couple went to the Houston Texans-New Orleans Saints game at Reliant Stadium and the Kiss Cam caught the pair.  While the president seemed oblivious, Barbara saw them on the jumbotron and planted a smooch, sending the crowd into a roar of approval.

Granddaughter Jenna dressed up as her on the 2016 Halloween edition of Today and the show went to a live feed of the former First Lady sporting an orange shirt and black pointed hat joking she heard Jenna was going to dress up as a witch and she decided to join her.

Republican strategist Ed Rollins’s autobiography, Bare Knuckles and Backrooms, features a picture of Bush icily staring at Rollins in a receiving line, underscoring Rollins’s claim that he “wasn’t on Barbara Bush’s Christmas card list” and a reminder that it is often easier to make peace with a politician than the wife of one.

The First Lady was very protective about her husband and would not shy away from sharing her views with him.

Ironically the most devastating comment Barbara Bush let slip was at the expense of her son Jeb as he was in the early phase of his unsuccessful bid for the presidency.

In an interview from her son George’s presidential library, Barbara praised Jeb’s qualifications to serve in the White House but followed that up with her view that there are plenty of other qualified people and that “we’ve had enough Bushes”.

The freeze frame of the reactions of her fellow first lady and daughter-in-law and twin grandkids was priceless.  One can only imagine the expression Jeb had upon hearing mom’s words broadcast live to the world.

Mom tried to make up for it later in media appearances, touting Jeb’s fitness for the Oval Office and the 90 year old matriarch dutifully trudged in New Hampshire in February to salvage her son’s candidacy.  You have to wonder if the crowds that showed up at the ex-Florida governor’s rallies were really there for him or his mother.

In all fairness, Barbara did not so much bury Jeb’s campaign before it even began but conveyed what was on everyone’s mind; Barbara may have been the only Bush to do so in the 2016 presidential election cycle.

Barbara Bush understood that there was an expectation that the First Lady had to walk the tight-tope of being her husband’s number one supporter while also above politics, a task she aced better than any in decades.

Interested in more national news? We've got you covered! See More National News
Previous Article BROUSSARD: There Is Something Very Fishy About The Library Tax On Saturday’s Ballot In Lafayette
Next Article Tom Perez Is A Lawyer, So One Wonders Why On Earth He’d Have The DNC Sue Wikileaks…