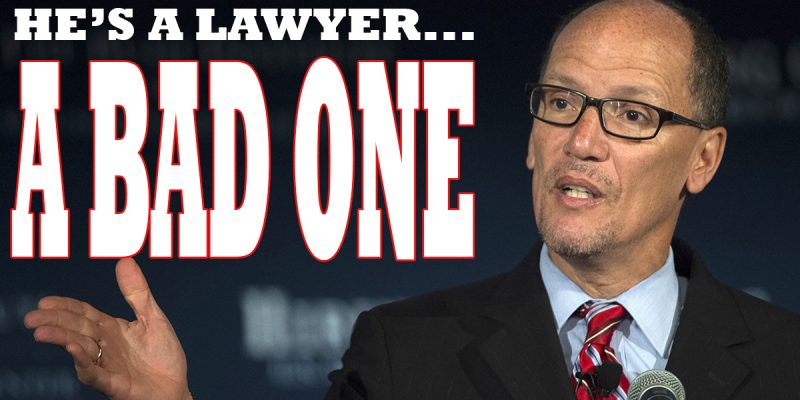 …knowing that Wikileaks would almost certainly sue the DNC in return.

Which is precisely what has happened, and as Wikileaks noted “discovery is going to be amazing fun.”

The Democrats are suing @WikiLeaks and @JulianAssange for revealing how the DNC rigged the Democratic primaries. Help us counter-sue. We've never lost a publishing case and discovery is going to be amazing fun:https://t.co/E1QbYJL4bB

Wikileaks isn’t the only defendant in this nutty Democrat Party lawsuit. The Trump campaign is also crowing about its opportunity to examine the Democrats’ “secret” records as part of the discovery process.

Just heard the Campaign was sued by the Obstructionist Democrats. This can be good news in that we will now counter for the DNC Server that they refused to give to the FBI, the Debbie Wasserman Schultz Servers and Documents held by the Pakistani mystery man and Clinton Emails.

While this lawsuit is frivolous and will be dismissed, if the case goes forward, the DNC has created an opportunity for us to take aggressive discovery into their claims of ‘damages’ and uncover their acts of corruption for the American people,”

If this lawsuit proceeds, the Trump Campaign will be prepared to leverage the discovery process and explore the DNC’s now-secret records about the actual corruption they perpetrated to influence the outcome of the 2016 presidential election. Everything will be on the table, including:

• How the DNC contributed to the fake dossier, using Fusion GPS along with the Clinton Campaign as the basis for the launch of a phony investigation.

• Why the FBI was never allowed access to the DNC servers in the course of their investigation into the Clinton e-mail scandal.

• How the DNC conspired to hand Hillary Clinton the nomination over Bernie Sanders.

• How officials at the highest levels of the DNC colluded with the news media to influence the outcome of the DNC nomination.

Perez, who served at one point as the head of the Justice Department’s Civil Rights section in the Obama administration, did the Sunday show circuit yesterday and defended the zany decision to sue Wikileaks, the Trump campaign and the Russians over his party’s loss of the 2016 election by saying the party “can’t afford not to” pursue the lawsuit.

Actually, that isn’t quite true. The Democrats’ bank account is virtually empty and their debts are mounting. Incurring legal fees to pursue a hopeless lawsuit only works as a crass, shortsighted attempt at fleecing unhinged leftists into renewing their donations to the party which dissipated after word leaked of its treatment of Bernie Sanders in the 2016 primary.

Which, regardless of anything Perez says, is why the DNC filed that insane suit. They’re desperate to find something, anything, which will generate some revenue.

The problem is, the lawsuit is more likely to expose as a matter of public record what people already know and have stopped donating as a result – that the Democrat Party is a thoroughly, brazenly corrupt enterprise run by the worst people in American politics.

The last thing the DNC wants is to give Trump, Wikileaks or anybody else the ability to rummage through its files and uncover the genesis of the Steele dossier or the Debbie Wasserman Schultz Pakistani IT mess – because there are lots of people on Capitol Hill who believe the latter involves the DNC, and that Imran Awan had access to the DNC’s files and may well have shared them with foreign actors (the Pakistani ISI, for one, and who knows who else).

Again, Perez is a lawyer – though it appears he’s not a good one. He has to know filing a lawsuit like this could result in an existential threat to the party if the blowback is as it could be.

And when the question was posed to him about all the discovery the DNC might be subjected to on ABC News’ This Week yesterday, here was his response…

“(T)here’s this thing called Rule 11, where you get sanctioned for trying to do things like that,” he said. “That’s why we have a civil justice system. You can’t fire this judge who will preside over the case. You can’t pardon defendants in a civil case. I think it’s so important for the American people to see the truth here.”

All the truth, Tom? You sure?