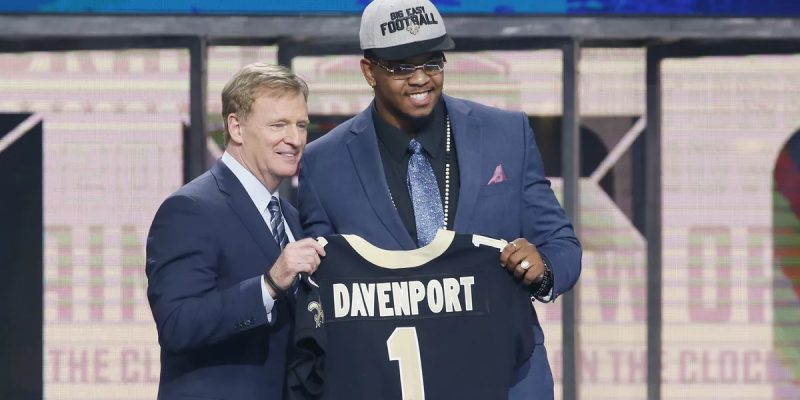 The New Orleans Saints made a big splash trading up to land the edge rusher they coveted while also reloading the reserves with fresher talent.

For a team that went from panic mode after dropping their first two games by double digit margins, they trimmed the fat and allowed their rookie talent to develop into a squad that locked up the NFC South and was one muffed play away from going to their third ever NFC championship game.

The team didn’t have many pressing needs of a “make or break” nature going into the 2018 NFL Draft, but before looking at this year’s new players, let’s take a step back at last year’s.

I wasn’t a fan of last year’s draft class, with a lone exception.  And to my enjoyment they proved me wrong throughout the 2017 season.

I was worried that cornerback Marshon Lattimore was a health risk.

I expressed disappointment that the Saints got “stuck” with tackle Ryan Ramczyk.

I thought running back Alvin Kamara was a potential problem player and a luxury pick.  After all, we had a future Hall of Famer on the roster.  Amirite?

And I plain just didn’t like where linebacker Alex Anzalone came from. (Florida)

My enthusiasm was tepid for defensive linemen Trey Hendrickson and al-Quadin Muhammad.

The only player I did like was safety Marcus Williams. The goat from the playoff game, yes. But Williams had played exceptionally throughout the regular season.

Instead this bunch that I publicly vented my cynicism all made the roster and are collectively considered the best draft class in the history of the franchise.

Lattimore proved to be far better than Jabari Greer, snagging interceptions and Defensive Rookie of the Year honors.  Sensitive over last year’s haters, the cornerback spent his 2018 draft day retweeting numerous posts by my fellow naysayers, particularly those who called him a “bust”.

Fortunately the Ohio State defensive back didn’t find my less than positive tweets.

Ramczyk’s time on the pine ended quickly out of necessity when longtime Saints tackle Zach Strief went down in what would be the final snap of his career.  Ramczyk is regarded as the best offensive lineman in the 2017 draft.

And then there is Kamara.  I got religion quick on him after watching the running back blaze around the field in preseason and held out hope that he would become that long overdue replacement for Darren Sproles.

Instead of a rap sheet, Kamara’s smiling face was on the Offensive Rookie of the Year t-shirt, and when not walking alongside Saints fans after games can be seen towing a jeep with a barbell on his shoulders.

Anazlone became a starter until being sidelined with an injury.  Hendrickson contributed, playing in 12 games and getting two sacks, while Muhammad led the NFL preseason in sacks.

So yeah, I decided to not write a column about my thoughts of where the Saints should spend their draft picks and settled for merely tweeting “please draft a defensive end”.

Ever the craps shooters, General Manager Mickey Loomis and Head Coach Sean Payton made no secret about wanting to move up in the first round, though for what player and position was unclear.

When word hit that the Black and Gold cut a deal with the Green and Gold, the WWL 870 AM draft party at Central City BBQ went silent.  Were they chasing quarterback Lamar Jackson or a defensive end?

A sigh of relief went up when it was announced that defensive end (yes!) Marcus Davenport (who?) of University of Texas- San Antonio (where?) was drafted.

And in addition to being a football player, Davenport is also a poet. WHAT!?!

The defensive end was a consensus #2 at his position and his personal stats and playing numbers, even in the not so dominating CUSA, show a guy who is fast, makes good use of his size- arms in particular, and puts quarterbacks on the ground.

The biggest non-secret for the Saints was that they desperately wanted a pass rusher opposite of prolific sacking defensive end Cameron Jordan.  Davenport is not a sure thing, but his selection was the biggest sign that the team is going all in for a Super Bowl run THIS season.

No Second Round Pick?  No Tight End.  No Problem!

I don’t think many Who Dats were particularly sad over not having this year’s second round draft pick, having shipped it off to the San Francisco Forty-Niners so the Saints could land Kamara in last year’s third round.   A rare swindle pulled off by the Saints over their historical bete noire from the Bay Area.

However, not having that second round selection did make getting a top notch tight end (the teams second biggest need) impossible, as many were gone from the board by the 91st overall pick.  However the Saints did add another piece to their wide out corps by grabbing Central Florida’s Tre’quan Smith.

Smith posted good numbers in college and has the physical build to be a good receiver.  The third round selection will go into training camp and preseason fighting for playing time in a wide out department that is already crowded.

The Purple and Gold Embargo Ends

With the selection of center Will Clapp, Airline Drive’s embargo against LSU players in the draft comes to a merciful conclusion.  Beyond bringing to a close one of the most talked about topics on local sports radio programming, the Saints got great value with Clapp, who was considered one of the top 5 centers in the draft.  Clapp has some versatility  as he has played guard as well and despite his low round selection, has a great chance of making the roster.

As for the Rest

Tackle Rick Leonard of Florida State (who everyone with a sports audience seems to be really down on), safety Natrell Jamerson of Wisconsin, cornerback Kamrin Moore of Boston College, and running back Boston Scott of Louisiana Tech will have to battle to push not starters out of the way, but their back ups.

If any of these players take the field for something other than preseason or special teams plays, that means someone important got hurt.

Interested in more news from Louisiana? We've got you covered! See More Louisiana News
Previous Article Abraham: Receiving Food Stamps Shouldn’t Be a Lifestyle
Next Article Louisiana Isn’t At The Bottom Of The New “Rich States, Poor States” Rankings, But…