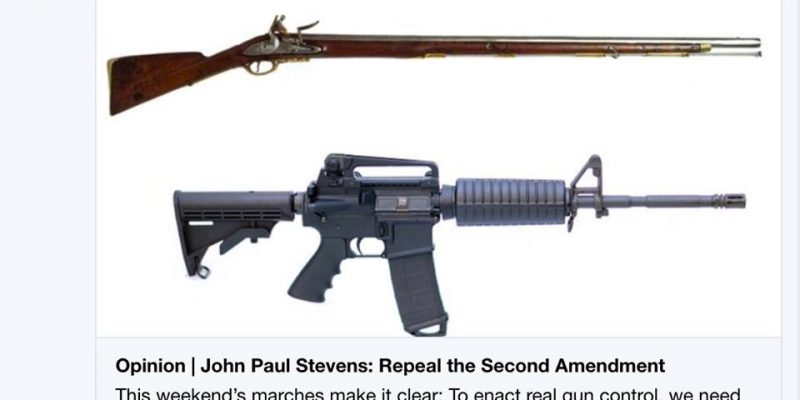 Absolute control of the people. That’s the answer. The single goal of liberals is to have a one-party system, controlled by their leadership, and to pass out the spoils of political gain to their minions as their source of wealth. Ever notice that soft spot your left-wing friends have for Hugo Chavez, Fidel Castro or Huey Long? It’s not an accident.

But first they have to disarm the people – or the peons might just fight back. Once that happens we won’t need no stinking elections! Imagine! A population having no weapons to fight an oppressive government. It’s the same old dream of all freedom-crushing political plans driven either by communist, socialist or just plain old dictatorship-based governments.

Make no bones about it. The liberals want the population to be disarmed so that they will never be taken out of power by some pesky election. To control the treasury, and the people, for their own benefit. That’s the plan.

Before America began to be populated by Europeans, those folks lived under a myriad of monarchies. All monarchies seek control. If you wanted to bear arms you had to be elite – the king’s elite. Suffer ye the common folk. The typical coat of arms of European controlling-class members was a mark of their ability to bear arms. The masses be damned.

American literature, film and television are replete with stories about how menacing kings had their men at arms keep the peace by keeping the heel of their boot down on the peasantry.  Monarchs didn’t keep that method of control to themselves, their successors tagged it. When royals were turned out on their ear, or executed by leftists, the leaders of those successor movements of democratic socialists continued their monarchial control of weapons. Then the smart Europeans left in search of freedom. They weren’t looking so much for land and prosperity, (although it helped), as they were for a way to get the hell away from oppressive governments.

It’s a trick question. We always had the right under any understanding of natural law. That is the right to self-defense. Whether from an individual aggressor, an enemy invader or an oppressive government; an individual has the natural right to defend themselves against all comers.

But take note, the government didn’t give us our rights! We told the government how it would be restricted. The people dictated the constitution and the amendments making up the bill of rights, not the government. It’s a concept lost on many and an idea that should be refreshed amongst our citizens.

Before there was a second amendment, there was a constitution. As soon as it was completed by the framers, our representatives, and our people, they realized that certain natural, God-given, rights were not in the constitution.

In Federalist No. 46, James Madison wrote how a federal army could be kept in check by state militias, “a standing army … would be opposed by a militia.” He argued that state militias “would be able to repel the danger” of a federal army, “It may well be doubted, whether a militia thus circumstanced could ever be conquered by such a proportion of regular troops.”

He confidently contrasted the federal government of the United States to the European kingdoms, which he contemptuously described as “afraid to trust the people with arms.” He assured his fellow citizens that they need never fear their government because “besides the advantage of being armed, which the Americans possess over the people of almost every other nation, the existence of subordinate governments, to which the people are attached, and by which the militia officers are appointed, forms a barrier against the enterprises of ambition.”

Madison got it right. We are not Europeans. We are freedom-seekers.

Now some folks talk about how we don’t need weapons that are comparatively equal to those of the military of United States forces. It’s a charming way to exercise gun control and it’s hogwash. People shall have the right to repel forces. So consider something more than a shotgun.

American citizens should recognize that the second amendment is not about duck hunting, it’s not about shoot-the-burglar, rather, it is about those concepts in the roots of natural law, but as a codified portion of our constitution, it is about keeping the federal government in check so we can maintain our freedoms.

Consider the text of the second amendment:

“A well-regulated militia being necessary to the security of a free state, the right of the people to keep and bear arms, shall not be infringed.”

First, there’s three separate elements: a militia, a statement of rights and a declaration. Recognize the simple fact that there is no federal militia. This is about the states.

Louisiana is a perfect example of how a state’s military hierarchy functions. We have the National Guard (subject to being federalized by the President), then the State Guard which can be called out by the governor and not be federalized. And then we have the unorganized militia. Our militia is composed of everybody able to fight. Every single citizen.

So James Madison shines through in the second amendment. He wanted a stated right of the people to be able to have their state militia ready to stand against a federal army if it was needed. Madison wanted it codified that a militia is necessary to the security of a free state. Just accept that Madison could conceptualize that one day the federal government would raise an army and invade a state to exercise its political will. Whoops! That did happen! So James Madison was right, but can we discuss someone who lately has shown he’s wrong?

I’m reasonably convinced that a retired Supreme Court justice, a republican from Chicago (which is a lot like a Louisiana Communist) got a “listen to me you whippersnappers” moment and had his clerk fire off a scholarly diatribe against freedom. That should scare the living hell out of every American. That is an action of endorsing government telling us how it’s going to be. It scares me for the statement alone. But it scares me more that this Justice thought he understood the constitution enough to sit in judgment on constitutional issues that came before the highest court in the land. And all the while it’s apparent that he didn’t even have the basic understanding of the fact that the constitution is to control the powers of government. That Justice has the gall to suggest we let the government turn it inside out and let the government tell us how it’s going to be.

The danger further revealed itself when the head of the Louisiana Democratic Party Sen. Karen Carter Peterson announced on twitter that we should repeal the second amendment. Since then, Senator Peterson has been having her spokesman reel in that cast as fast as he can and all he has on the spool is a bird’s nest of lies. The spokesman stated, “It was simply a retweet of an article from inside the article that many people found surprising because it came from a former Supreme Court justice.”

I pause for the common reaction to a bull parking its breakfast.

That statement would be laughable it the situation weren’t so grave. So a 97 year old’s lib clerk writes an article and the head of the Louisiana Democratic Party squawks like a parrot without thinking?! The spokesman went on to back-slap Gov. John Bel Edwards cuz he’s got an “A” rating from the NRA. Maybe when he was a legislator. But now he is the man to soon be tossed out of Louisiana and onto the ash heap of failed democratic presidential candidates, right next to Mitch. Ole John Bel and Mitch are soon to be leaders in the “scrub the second amendment movement” and “lose a few statues” or they won’t get the support from the growing socialist arm of the Dems.

Always remember to be totally responsible for weapons and your actions. These things ain’t toys. They are our weapons of destruction that stand as the vanguard of freedom against leftist tyranny. When the time comes to fight for freedom, stand with your neighbor. I will stand with you.

Interested in more national news? We've got you covered! See More National News
Previous Article JOHNSON: How To Explain The 2nd Amendment To Your Teen
Next Article Cruz Kicks Off ‘Tough as Texas’ Campaign