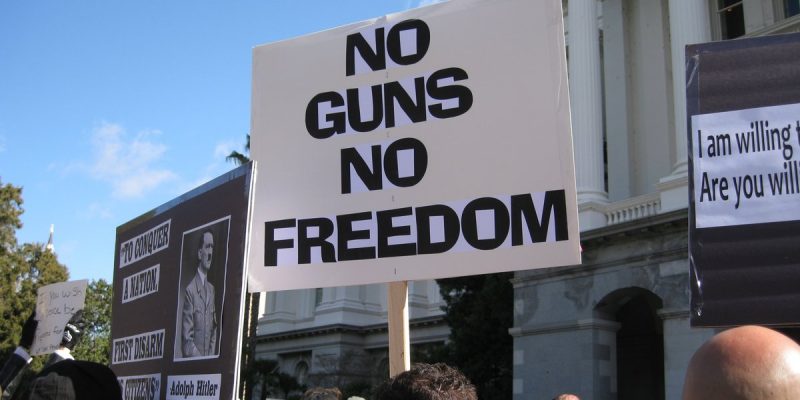 Since the Parkland shooting, our nation has been plagued with a discussion of gun control across the board. Whether or not that is warranted is completely up to you- however, it certainly has made a segment of the population abandon common sense, in my opinion. Never mind the fact that the Federal Bureau of Investigation missed tip after tip on Nikolas Cruz, the fact that police and emergency responders were told not to enter the school and that the school resource officer did not do the job he was hired to do, the fact that the Sheriff’s Office missed every opportunity they had to avoid such a tragedy from occurring, or the ample other occurrences that happened that shouldn’t have- all of which could have prevented deaths from occurring.

Nonetheless, the left has decided to push for gun control, staging school-organized school walkouts for all students regardless of if they wanted to do so (even some children as young as five!) and promoting students that openly preach the cause at every turn and targeting those who do not agree. Never mind the fact that they spurn the survivors that disagree with them and state that gun control isn’t the right approach, or that an attempted shooting occurred in Maryland where an armed school resource officer did their job in apprehending the shooter. Those points, among others, are moot, according to Democrats far and wide.

However, over the past week or so, escalations have occurred. It started with Kyle Kashuv, a conservative Parkland survivor, being detained by the Marjorie Stoneman Douglas High School’s school resource officer. According to Kashuv, he had posted a tweet regarding a recent trip to a local gun range with his father, which detailed his enjoyment of learning how to properly use a gun and how he gained further appreciation for the Second Amendment to the United States Constitution. In the days after, Kashuv was pulled into the school’s office behind a locked door and was interrogated by the school resource officer and a sheriff’s deputy regarding his trip to the gun range. Kashuv said, “He came in with the notion that I’ve done something wrong by going to a gun range.” The resource officer reportedly also asked how he could “do something like this” after being in five AP classes. In response to a teacher from Stoneman Douglas’s tweet, Kashuv had this to say: 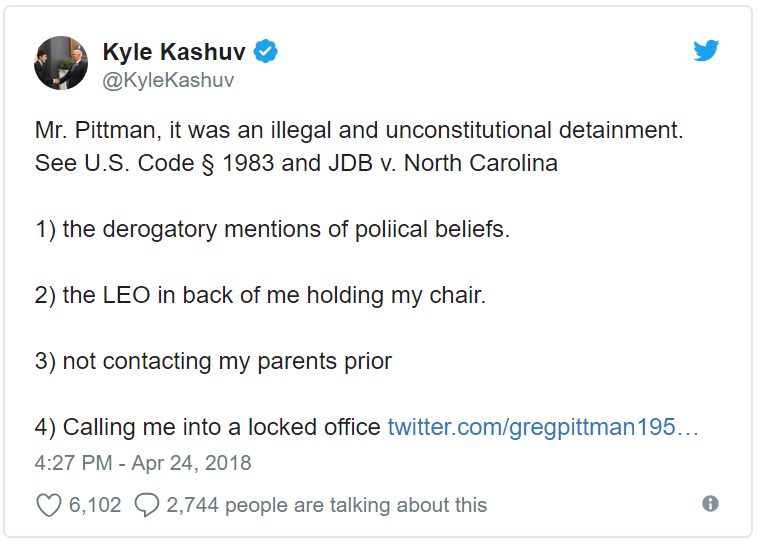 As if this wasn’t bad enough, the escalations only went further from there. Ken Bone (that guy from the second 2016 presidential debate, the one who wore the red cardigan) tweeted about his son’s recent suspension from his high school following THEIR trip to the gun range. Bone initially tweeted a picture of his son at the gun range, saying “Here’s a pic of my son learning to shoot safely under my supervision. Maybe those security guys want to talk to him,” referencing Kashuv’s incident at Stoneman Douglas. Two days afterward, Bone went back to Twitter to notify everyone that his son had actually been suspended from his high school, stating, “Remember this photo from a few days ago? Well, a school administrator saw it and now my son is suspended from school pending a police investigation.” According to Bone, his son was not asked about his tweet by an administrator or faculty member, did not know that he was suspended, and that they only found out about the suspension because the principal was nice enough to call after school to tell Bone about the decision. It’s also noteworthy that Bone’s son has no Twitter; only Ken Bone does.

However, these infringements of these students’ constitutional rights were predated by other controversies that could land schools in hot water. Back at the end of March, an uproar commenced in New Jersey over a school suspending two students over a photo that was taken on Snapchat when the two visited a private gun range. The students received a five-day in-school suspension for allegedly violating the school’s policy on possessing weapons. The policy, according to the Association of New Jersey Rifle and Pistol Clubs, states that students can be suspended for up to a year for being “reported to be in possession of a weapon of any type for any reason or purpose on or off school grounds.”

Let’s start at the top with Kashuv’s case and move forward from there. That photo that was taken simply did not violate any rules, nor was it a reason for concern. If people knew who Kyle Kashuv was and/or actually did their due diligence and read the caption as they should have, they would understand that this is not a kid who is a threat to that high school. He is a student who is enjoying his constitutional right off-campus in an activity unrelated to school. That isn’t illegal. It’s actually worth noting that it’s constitutionally protected under the Second Amendment. The fact that Kashuv was detained at all has a myriad of legal issues surrounding it, as he eagerly pointed out to that teacher on Twitter.

Secondly, in the case of Ken Bone’s son, we have an even bigger issue. Bone’s son wasn’t just questionably detained for visiting a gun range with his father; he was actually suspended from school. That suspension in itself is a major violation of the Second Amendment, one that can almost certainly guarantee a lawsuit for the school. There’s even a major argument to be made in a potential Supreme Court case here, as I’ll detail in the next paragraph. The point is, this was a massive precedent to set, and while it’s not surprising anymore, it shouldn’t be tolerated.

In every one of these cases, from Kashuv to Ken Bone’s son to the New Jersey students, we have a major constitutional issue here. The left is content to simply remove their concerns about constitutional rights in these cases because they aren’t interested in allowing conservatives to use them. When discussing walkouts with people I know, I have heard over and over again, “Well, these kids have an absolute right to walk out and protest! We shouldn’t stifle their free speech!” And that is correct. We shouldn’t, and we actually can’t. In the Supreme Court case of Tinker v. Des Moines Independent Community School District, the Court ruled that students have a constitutional right to free speech, and that “it can hardly be argued that either students or teachers shed their constitutional rights to freedom of speech or expression at the schoolhouse gate.” However, in that case, we certainly shouldn’t stifle the speech of conservatives who argue FOR arming teachers, more security, or other more pro-Second Amendment arguments. Those students should also be allowed to protest in favor of that, to express their opinion, and to have their free speech. Unfortunately, as of this moment, there’s no Supreme Court decision (to my knowledge, at least) that enforces a student’s constitutional right to bear arms. Up until this point, to be fair, we didn’t have schools informing kids that they weren’t allowed to look at a gun, use a gun, post pictures with a gun, and so on. What happened outside of school was not an issue- and in the name of school safety, students that aren’t threats are being targeted for their support of the Second Amendment. While it is absolutely imperative that students that are a threat to others be monitored and dealt with prior to possible violence, it is equally important that we don’t squash the rights of good students along the way. This is why these cases, if litigated, could be a watershed moment for the rights of students and for the Second Amendment; if this goes to the Supreme Court, there’s a reasonable and rational argument to make in favor of making a Tinker-esque right for students to be able to wield a firearm outside of school (with the obvious exception to the rule being that they are a threat to others). In order to protect students’ rights, this must occur; lucky for us, we have that occasion. Students should not have to worry about being able to go to a gun range or shoot a gun outside of school just because their school administrators are being politically pressured to commit to gun control measures. Students should be able to experience their rights, just as the Constitution enumerated them.