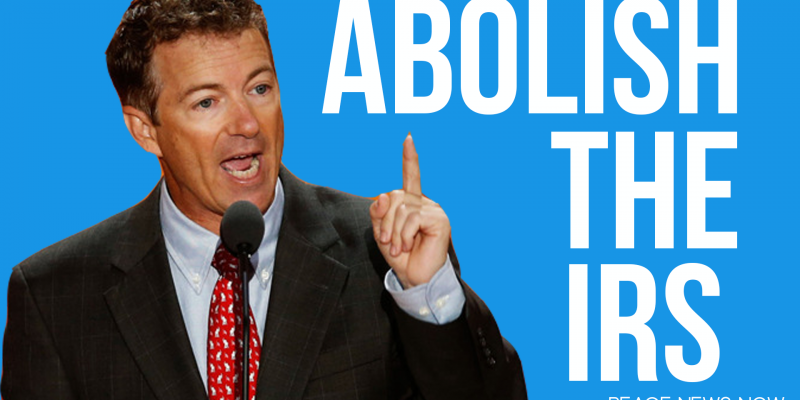 When thinking about Tax Day, I have the same loathing and discontent that millions of Americans share. But feelings aside, there really is a better way. The founders of our nation and the authors of our Constitution strongly opposed a progressive income tax. They provided that the Department of Treasury had the sole responsibility of collecting taxes passed by Congress and it should be returned to their purview after abolishing the income tax along with the IRS.

The US Tax Code is over 72,000 pages long and the Internal Revenue Service employs nearly 80,000 people. Every year leading up to Tax Day, it takes the average American 13 hours to comply with the tax code. Just think of all the time and productivity that goes into this inconvenient facet of all of our lives, now imagine how those hours could be better spent. Additionally, imagine the amount of tax money that could be saved from not having to pay the salaries of the roughly 80,000 government employees at the IRS.

The average salary of an IRS employee is over $75,000, well beyond the salary of the average American. Multiply that by the nearly 80,000 employees and the American people could save over $6 BILLION dollars annually by embracing a fair and flat consumption tax. Combine that with the impact of letting hard working men and women keep the money they earn and we would have a serious boost to the economy. For fellow fiscal conservatives who are not persuaded, I find it important to point out that the current system is straight out of The Communist Manifesto written by Karl Marx. In fact, the book outlines 10 planks in the road to Communism, the 2nd plank being “A heavy and progressive income tax”.

Some of the people most inconvenienced by the current system are the millions of middle-class Americans who pay the self-employment or independent contractor tax. These individuals are burdened with the responsibility of making ends meet while somehow holding onto thousands of dollars to give to Uncle Sam at years end. For goodness sake, even Russia implemented a flat tax of 14% since 2001 which has been overwhelmingly successful. Meanwhile, Americans are arguing over the “extreme” nature of a 20% flat tax which would cut the tax rate for every income group.

In recent years, Republican candidates have used the concept as a means of elevating their conservative credentials. Former Presidential candidates Rick Perry, Ben Carson, Rand Paul and Ted Cruz have all indicated their support for a new and improved consumption tax system which would allow Americans to “file their taxes on a postcard”. For our liberal friends, you should be on board as well because the evil “1%” would necessarily pay more in a consumption-based system because jumbo jets and yachts cost a lot more than a Subaru.

On this Tax Day, I hope you will agree with me that the time has finally come to stimulate the American economy not through wasteful government spending packages but through empowering the American people with the right to spend more of their money as they see fit. We need to remove the notion that your income belongs to the government and deliver an important blow to Communism in America.