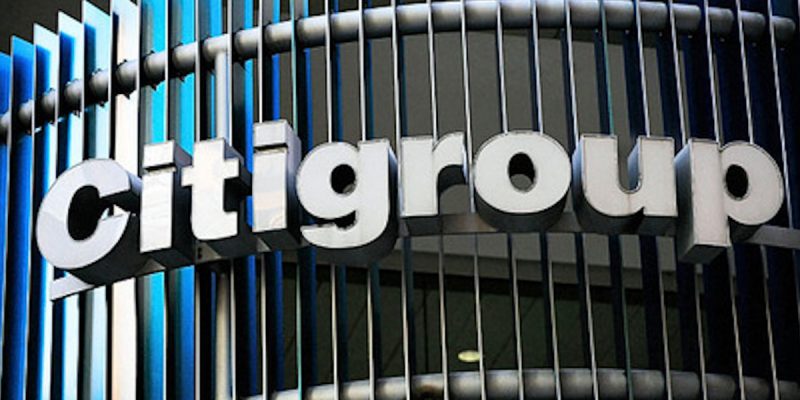 In case you didn’t notice it, last week Wall Street-based Citigroup joined in what seems like a ratcheting-up of coastal elite pressure against ordinary Americans in pursuit of restricting 2nd Amendment rights…

Citigroup Thursday announced a new policy aimed at pushing its clients to place restrictions on the sale of firearms, becoming the nation’s first large lender to take action on guns.

The move by Citigroup, the fourth-biggest U.S. bank by assets, comes two days before major nationwide rallies on gun control are scheduled to take place.

The bank will require retail clients to only sell guns if the customer has passed a background check, to restrict sales to people under 21, and to refuse to sell bump stocks or high-capacity magazines. Bump stocks enable a semiautomatic rifle to fire faster.

The policy “is not centered on an ideological mission to rid the world of firearms,” Ed Skyler, Citi’s head of global public affairs, said in a blog post. “That is not what we seek. There are millions of Americans who use firearms for recreational and other legitimate purposes, and we respect their constitutional right to do so.

“But we want to do our part as a company to prevent firearms from getting into the wrong hands,” said Skyler, who served under former Mayor Michael Bloomberg in New York City for eight years. Bloomberg is a leading gun-control advocate.

Citi says it will no longer do business with clients who decline to go along with the policy.

“We know our clients also care about these issues, and we have begun to engage with them in the hope that they will adopt these best practices over the coming months,” Skyler said. “If they opt not to, we will respect their decision and work with them to transition their business away from Citi.”

The bank will apply these requirements across the firm, he said, including to small businesses, commercial and institutional clients, and credit card partners, Skyler said.

Got that? Here is a bank – they’re not the government, they’re a bank – which is now threatening to refuse business and discriminate against clients who engage in legal commercial activity. You cannot get much more obnoxious than this. It’s far worse than the baker who for religious reasons won’t bake a cake for a gay wedding – Citigroup doesn’t have any religious objections to the sale and ownership of firearms; they’re just currying favor among the gun-grabbing political set. Nobody’s core values are being represented here other than those of Skyler – the former Bloomberg apparatchik.

Needless to say, this is the kind of thing which will attract the scrutiny of Louisiana’s junior senator John Kennedy. And so this morning Kennedy erupted. Here’s a press release…

WASHINGTON, D.C. – U.S. Sen. John Kennedy (R-La.) sent Citigroup CEO Michael L. Corbat a letter seeking information on the repercussions for Louisiana from Citigroup’s threat to retaliate against small businesses who support Second Amendment rights. Citigroup is threatening to sever business ties with customers who do not follow certain rules for selling firearms. A copy of Sen. Kennedy’s letter to Citigroup is below.

“Citigroup has no business threatening law abiding business owners for exercising their Second Amendment rights. The only reason that Citigroup is even in business today is because American taxpayers bailed them out during the Great Recession,” said Sen. Kennedy. “Instead of imposing its political agenda on the American people, Citigroup ought to be finding ways to help these mostly small businesses grow. Citigroup certainly shouldn’t be threatening their Constitutional rights.”

And here’s the letter Kennedy wrote to Citigroup…

I write today regarding the new U.S. Commercial Firearms Policy that you unveiled last week at Citi.  I have significant concerns about this policy and respectfully request that you provide me the specific number of entities in Louisiana which stand to lose banking services as a result of your increased scrutiny on law-abiding businesses.  I wish you would provide the same level of scrutiny to other areas of Citi’s business instead of penalizing Americans who choose to exercise their 2nd Amendment rights.

As I have read from your executive’s blog post addressing the new direction Citi is taking, it seems you want to do your part to change American society positively.  I applaud that goal and share your belief that it’s vital to our societal and cultural growth.  However, I strongly object to cracking down on gun manufacturers, sellers, and owners when you have such significant opportunity to “do your part” in other areas of your business.

It feels like yesterday when Citi received nearly half a trillion dollars in taxpayer-backed guarantees and cash after putting the entire financial system at risk.  In fact, the 10th anniversary of the largest government bailout in American history is just around the corner.  I hope you will focus on properly running your business and addressing apparent shortcomings like overcharging credit card interest rates to account holders and compliance with U.S. anti-money laundering laws.  Those are real ways to “do your part” that would make a difference.

The very fact that Citi remains operational is due entirely to the generosity of the American taxpayers.  Please don’t forget that.  While I am disappointed in your announcement, I look forward to addressing it in the Senate Committee on Banking, Housing, and Urban Affairs.

Thank you for your attention, and I look forward to your response.

Normally we would be a bit reticent to support U.S. Senators coming down on business people for choosing how to engage in commercial activity. But when the engagement is in pursuit of a restriction of commercial activity without any particular reason, that’s a different story. After all, if we’re not going to allow the Christian florist or baker or photographer to refuse to service a gay wedding out of a core objection then Citigroup hasn’t a leg to stand on in discriminating against gun sellers or others who are engaging in legal commercial activity. Kennedy is at least willing to stand against that kind of left-wing commercial pressure, and if he hauls Citigroup officials into the Senate Banking Committee for a major dressing down over last week’s obnoxious announcement then good for him.

Somebody has to stand against the Left’s increasing corruption of corporate America along cultural Marxist lines, after all.