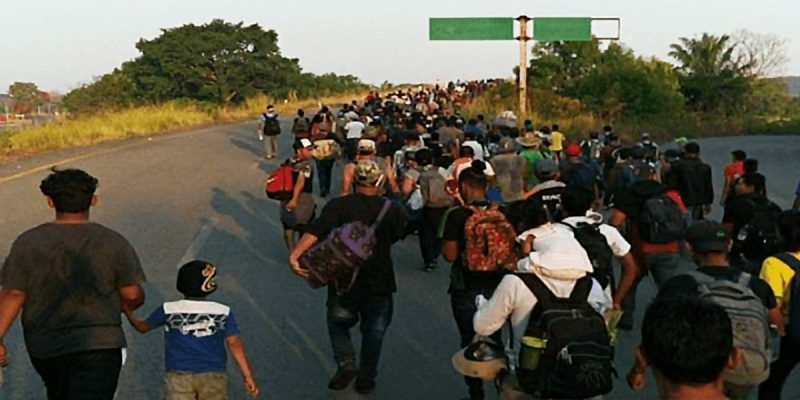 You’ve probably heard by now that hundreds, if not thousands of mostly Honduran immigrants are making their way through Mexico toward the US-Mexico border in an attempt to enter the U.S. illegally. The development has further strained diplomatic relations with our southern neighbor and brought the debate over illegal immigration back to the forefront of the news cycle.

President Trump lashed out over the incident on Twitter, calling for Mexico to stop the “caravan” at the northern border while threatening to cut foreign aid to Honduras and pull out of NAFTA. He also called for Congress to strengthen our immigration laws, for the end to the “DACA deal” and emphasized the need for “the wall” which was a major plank in his Presidential campaign. Meanwhile, several conservative activists are calling for the deployment of the National Guard along the southern border.

According to the leftist publication Mother Jones, this march is a combination of “theatre and exodus” organized by a group called “Pueblo Sin Fronteras” also known as “People Without Borders,” a migrant advocacy and support organization. Tuesday, President Trump announced that he plans to order the military to assist Border Patrol to fend off what some are calling an invasion. “We are going to be guarding our border with our military. That’s a big step,” President Trump told reporters.

“The big Caravan of People from Honduras, now coming across Mexico and heading to our “Weak Laws” Border, had better be stopped before it gets there,” Trump wrote. “Cash cow NAFTA is in play, as is foreign aid to Honduras and the countries that allow this to happen.”

The caravan that once numbered 1,150 or more people actually halted days ago in the town of Matias Romero in the southern state of Oaxaca, where participants slept out in the open. After days of walking along roadsides and train tracks, the organizers now plan to try to get buses to take participants to the final event, an immigrants’ rights conference in the central state of Puebla later this week.

Bogged down by logistical problems, large numbers of children and fears about people getting sick, the caravan was always meant to draw attention to the plight of migrants and was never equipped to march all the way to the U.S. border.

“The idea was never for this group of people to reach the border. It was more to achieve a sensible and clear solution” to migrants’ need to leave their countries, said Irineo Mujica, director of Pueblo Sin Fronteras, the activist group behind the annual symbolic event.

“We have never seen a march of this size. It is unmanageable,” Mujica said.

On Tuesday, the group — mostly Hondurans — spread out on blankets in walkways between buildings, on playing fields and on grassy spots between swing sets. Young children kicked soccer balls through the dust and climbed on resting parents, killing time. Adults gathered around the few power outlets to charge cellphones. A single municipal police officer kept watch.

Women and children picked through piles of donated clothing, as volunteers ladled water boiled over a fire into cups with instant coffee and instant noodles.

The fact is, nobody has the right to emigrate to America. This is something which somehow got lost among politicians of both parties before Trump came along and offered, in his own perhaps undisciplined way, the very simple response that America has the right to decide which immigrants it will take and which ones it won’t, and its choices do not reflect some sort of human rights issue for Third World people.

Honduras is an abject mess of a country, as is Guatemala and El Salvador. These are not America’s problems, though much American treasure and some amount of American blood has been spent in trying to help those beleaguered countries improve the lot of their people. While some amount of immigration and the remittances back home it might generate for the economies of those countries may play a role in the raising up of those Central American nations, Trump has recognized, and many U.S. voters agree, that there is a limit to the amount of tolerance for such activity – those remittances are a drain on the American economy, to the tune of billions, or tens of billions, of dollars taken as a whole.

Trump’s tough talk about the border probably wasn’t intended to stop the Pueblo Sin Fronteras caravan, and perhaps it didn’t. More likely, he’s posturing for consensus on construction of the border wall by offering the unappetizing specter of the U.S. military supplementing or commandeering the Border Patrol in a fashion which will make open-borders advocates cry “Uncle!” and accept his wall.

Either way, if nothing else the timing between his announcement and the halt of that caravan was nothing short of breathtaking, and Trump will take credit for it – as he probably should, as any other politician would likely do.