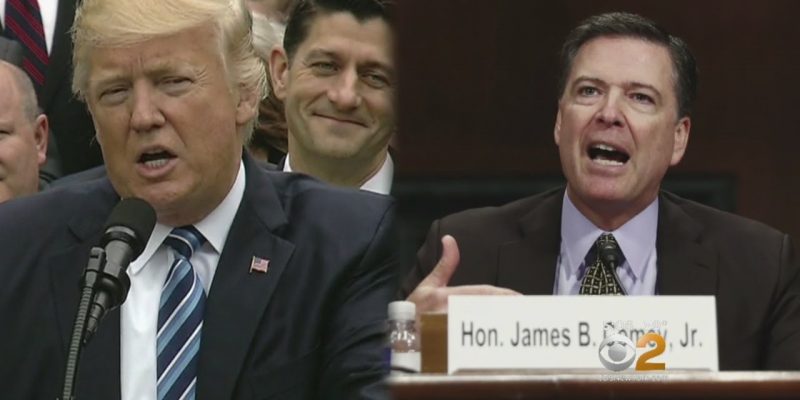 President Donald Trump pulled no punches Friday morning in a pair of tweets responding to rumors about James Comey’s new tell-all book in which he allegedly calls the President “untethered to the truth” and compares him to a dishonest mob boss.

“James Comey is a proven LEAKER & LIAR. Virtually everyone in Washington thought he should be fired for the terrible job he did-until he was, in fact, fired. He leaked CLASSIFIED information, for which he should be prosecuted. He lied to Congress under OATH. He is a weak and…”

“..untruthful slime ball who was, as time has proven, a terrible Director of the FBI. His handling of the Crooked Hillary Clinton case, and the events surrounding it, will go down as one of the worst “botch jobs” of history. It was my great honor to fire James Comey!”

Republicans on the hill preemptively prepared for the book release and following media tour by releasing a website aimed at discrediting Mr. Comey called LyinComey.com

Visitors to the website immediately encounter quotes from long-time Democrat leaders including Hillary Clinton and Nancy Pelosi expressing their lack of confidence in him in his former position as FBI Director.

Mr. Comey told ABC news “I honestly never thought these words would come out of my mouth, but I don’t know whether the current President of the United States was with prostitutes peeing on each other in Moscow in 2013.”

It is to be expected for him to make outrageous claims in order to get headlines ahead of his book’s scheduled release on Tuesday.

The President’s counselor, Kellyanne Conway responded by saying Comey “seems like a disgruntled ex-employee; after all, he was fired.”

The books release and tense relationship with the President and Republicans on the Hill are sure to supply plenty of drama the next several weeks.

Interested in more national news? We've got you covered! See More National News
Previous Article BAYHAM: Will Scalise Be Speaker?
Next Article Turns Out The Louisiana State Law Institute Are Fans Of Bestiality, Too…