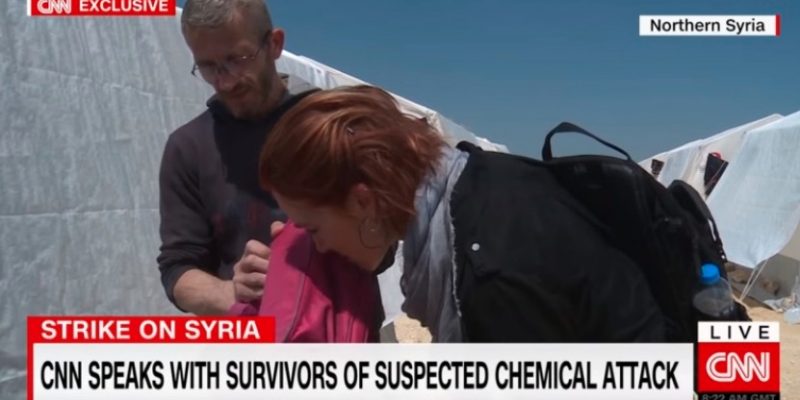 Unfortunately, this is not a comedy skit. It is real life.

Why is this CNN reporter sniffing chemical weapons?

I'd be a little concerned about inhaling chemical weapons.

Also, how can she smell them when CNN itself reported that sarin was used in the attack? Sarin is odorless.

The clip is rendered even more bizarre by the fact that sarin gas, which CNN itself reported was used in the chemical weapons attack, is odorless and could not be detected by smelling objects.

Why Damon has apparently no concerns about inhaling substances used in a chemical weapons attack is also unclear.

Respondents on CNN’s YouTube channel questioned why the reporter was trying to inhale chemical weapons.

“Take another whiff of that potentially chemical covered backpack,” remarked one.

“Sniffing a backpack contaminated by Sarin gas would kill you,” added another.

“Make sure we save some of the chemical laced clothes for when CNN comes and smells them. We don’t want people thinking this entire event was a hoax or anything,” joked another.

Except bombing people over fake gas isn’t a laughing matter. It’s a crime.