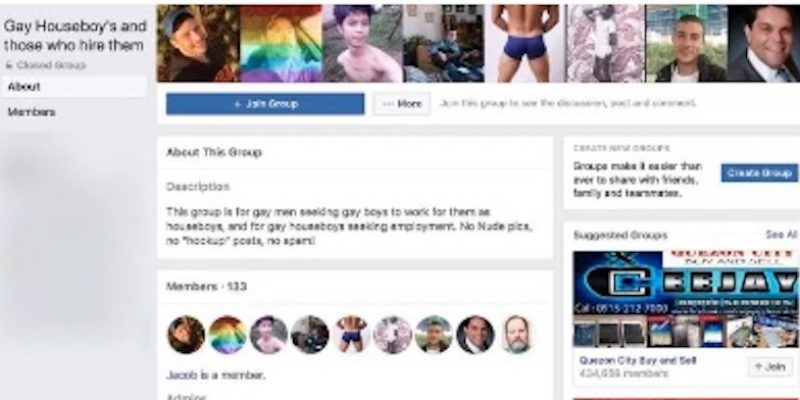 BuzzFeed writes: “Landlords Are Offering Young Men Free Rooms In Return For Sex And Facebook Is Letting It Happen.” The story interviews homosexual men who have nowhere to live, some A-students who just graduated college, and end up trapped in sexual slavery, exploited it argues by Facebook, Craigslist and Room Buddies. This post only addresses Facebook exploitation.

In multiple interviews with the men exchanging sex for rent and groups trying to deal with the crisis, BuzzFeed News also uncovered a spectrum of experiences that goes far beyond what has so far been documented, with social media, hook-up apps, and chemsex parties facilitating everything.

At best, impoverished young men are seeking refuge in places where they are at risk of sexual exploitation. At worst, teenagers are being kept in domestic prisons where all personal boundaries are breached, where their lives are in danger.

The investigation began by BuzzFeed staff replying to advertisements and ended up leading “to the darkest of places: young men raped, strangled, enslaved, and hospitalised – one with knife wounds to the neck.”

One of the groups on Facebook, “Gay Houseboy’s and those who hire them,” describes itself as a “group for gay men seeking gay boys to work for them as houseboys, and for gay houseboys seeking employment.” It states that nude photographs are prohibited and that people cannot post requests for hookups.

BuzzFeed News discovered the group after Facebook’s data breaches of millions of users and after Mark Zuckerberg told Congress that his company “didn’t do enough” to prevent it. However, BuzzFeed argues:

Zuckerberg also took credit, in his prepared statement, for the #MeToo anti-sexual violence movement, as it was “organized, at least in part, on Facebook”. He did so while his site continued to provide a platform – as it has done for the last four years–for landlords who detail the kind of sex and men they require as payment for the accommodation they are offering.

The groups uses posts that conceal gay sex-for-rent arrangements by using certain terms, like “houseboy.” In the homosexual world this term refers to sex. One post on the group reads: “Looking for a white male 18-25 to come and join our household for a live in position. General duties will include cleaning, walking dog, shopping, cooking and general house projects… This position would ideally include sex and lots of affection from our boy.”

Another is simply a photograph of a young naked man, with his penis exposed, standing by a Christmas tree with the words: “ISO [in search of] True HouseBoy 18-25 White Slim Clean.”

Obviously, the posts don’t follow what the group prohibits (not posting nude photos or hookup posts). And landlords aren’t the only ones posting. Young homosexuals are looking for live-in positions.

Despite the explicit nature of the postings on the group’s site, the administrator told BuzzFeed News that Facebook has not intervened. “We have never had an incident from Facebook,” he said. “If they [members] want to post something that will not fly with Facebook I write them, and tell them what needs to be changed.”

This has not stopped explicit notices being posted.

When approached by BuzzFeed News to respond to issues relating to this group, Facebook initially replied promising that a representative would comment. That response, however, did not materialise, despite several attempts by BuzzFeed News, over several days, to invite Facebook to do so. A week after first contacting the social media company, the group remains on its site.