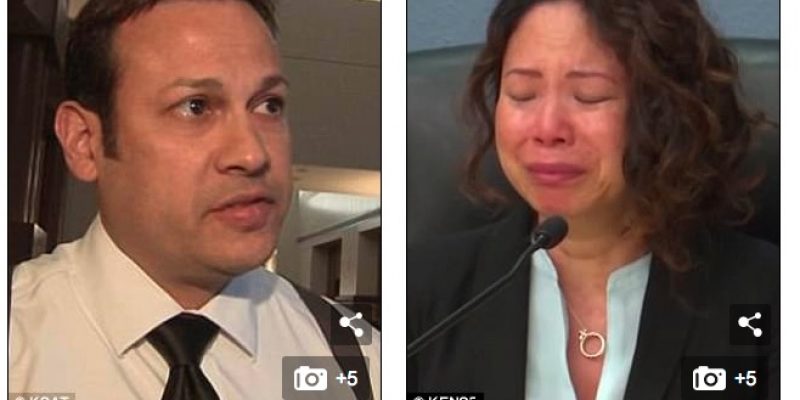 A former San Antonio lawyer, Mark Henry Benavides, was been sentenced to 80 years in prison for forcing six clients to have sex with him in exchange for his legal services. Yep, this happened.

Benavides, 48, who is married and a father of two children, was convicted last week on six counts of continuous trafficking of persons. His attorneys filed an appeal.

But that’s not all. Benavides is still facing trial on several other charges, according to court documents: two counts of sexual assault of a child, one count of sexual assault and an additional count of continuous trafficking of persons.

Prosecutors argued during the trial that Benavides targeted prostitutes and drug addicts because their testimony would be less credible, WOAI-TV reported. He coerced them into having sex with him, claiming that if they did, he would keep them out of jail.

The jurors were so shocked by the footage that the judge sent them out for a break. As they walking out, one woman fainted. She was later excused and replaced with an alternate.

One woman in the video testified against Benavides during the trial, saying that she felt she had to sleep with him because “he said he would help me get my son back.”

Benavides testified that the encounters were consensual, KENS-TV reported, but prosecutors argued that the women’s crying of pain during sex were not fake or acting, they were real.

“This is human trafficking,” prosecutor Meredith Chacon told the Express-News. “He transported, coerced, threatened and made them feel they had no choice. This jury understood that.”

Benavides was running to be a district judge in Bexar County at the time of his arrest in November 2015. He was accused of using force or coercing at least nine female clients into prostitution. He resigned from the state bar in 2016.

The San Antonio Express-News reported that after sentencing as he was leaving the courtroom, he mouthed to his wife, “I love you.”

During the trial his wife refused to acknowledge that her husband had committed a crime. Express News reported that she told the jury: “He cheated. He did. But he’s a good person. Please be fair. His kids love him so much.”

After the jury ruled, another prosecutor, Jay Norton, asked her whether or not she thought her husband had committed a crime, she said, “I am not aware of what has happened, except what I heard on the news.”

Norton replied: “They found him guilty of force, fraud and coercion.”

“To me, it’s cheating,” Benavides said.

To which Norton answered, “It’s an understatement to call it cheating if it’s a criminal act. “The jury found him guilty of crimes, not cheating.”