It seems possible. We already know that teacher strikes are a thing this year, since they’ve happened in Kentucky and Oklahoma and West Virginia. Could one be coming to Louisiana? 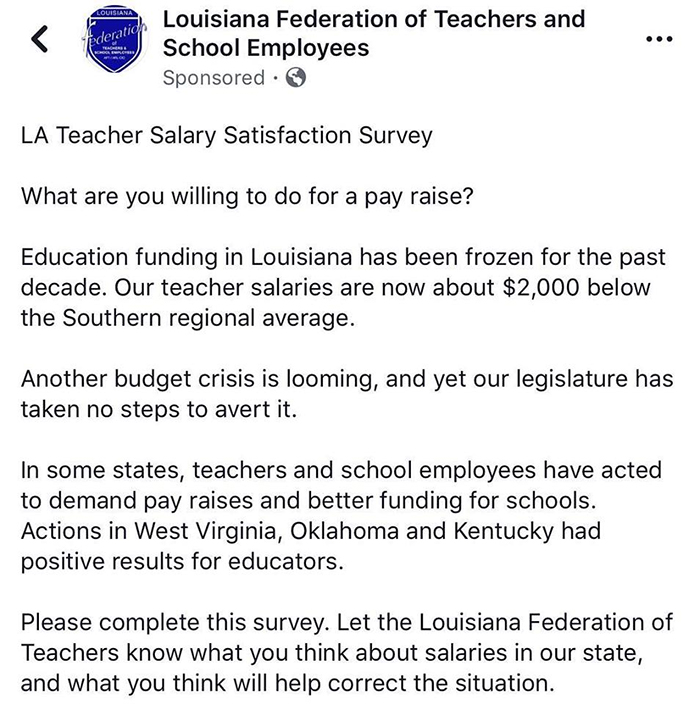 LFT’s president Larry Carter has been vocal in touting the teacher strike in West Virginia. From WWL Radio a month ago…

West Virginia teachers won a five percent raise for all state workers after a nine day strike. In the wake of reports showing Louisiana teachers are paid 2,000 dollars less than the regional average, Louisiana Federation of Teachers President Larry Carter says if all other options are exhausted to get better conditions for teachers, he would support a strike.

“I would support that because members and school employees would actually want that, to go out, if that’s the last resort we have to get a point across.”

At the moment though, Carter says there has been no discussions locally about staging a strike. He says they’re waiting to hear more from educators.

“Going on strike is always the last resort, it’s always the last thing that teachers, school employees, and even unions for their part want. I think we have a ways to go in Louisiana, and even other parts of the country before it becomes a national strike.”

The response to this, of course, is that Louisiana is 47th, or 45th, depending on the study, in terms of outcomes in K-12 education while placing 26th in per capita spending. So if the aim of a teacher strike is to generate higher taxes for raises, that’s a losing argument to be sure.

If the aim is to put more school money into the classroom to pay quality teachers, and to waste less on bureaucracy in public education, then there might be some allies LFT doesn’t even realize they have.

But when your official name is the Louisiana Federation of Teachers and School Employees, and you’ve expanded your membership beyond teachers so as to pump up your membership, well…it doesn’t take a genius to know this is about higher taxes.

And if you want to pull out your 3D chessboard, you can consider that they’re talking in the Legislature about ending the regular session early so they can get rolling with a special session to increase taxes before the regular session is supposed to end June 4. The timing on that should work out just fine with there being a teacher strike right at the end of the school year and the Legislature being pressured to hike taxes to give teachers a pay raise.

Of course, in Oklahoma, West Virginia and Kentucky there are Republican governors who were demonized by the teachers as they went out on strike. Louisiana has a Democrat governor who’s as friendly to the teacher unions as ever a governor has been. Going out on strike on John Bel Edwards’ watch would be a significant affront to him, and while perhaps he’d appreciate it as a talking point in favor of his pro-tax argument it would nevertheless make him look weak.

Something to watch for.

Interested in more national news? We've got you covered! See More National News
Previous Article JACOBS: Why The Medicaid Expansion Is A Drain On Louisiana’s Economy
Next Article FINALLY, Y’all Start Listenin’ To Us Nutria!