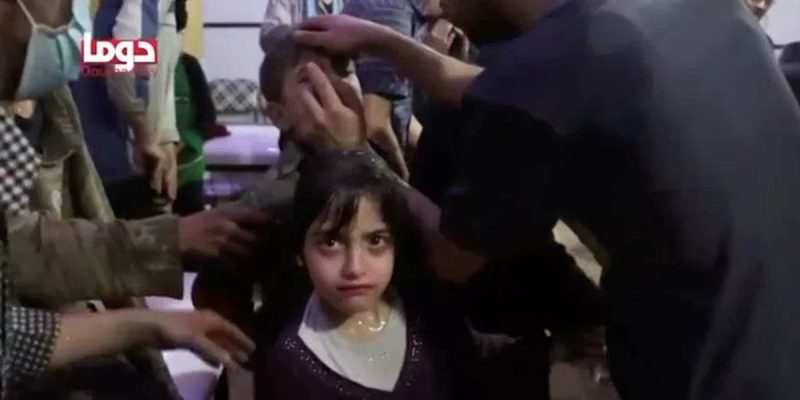 President Trump condemned Saturday’s chemical attack in Syria in a cabinet meeting on Monday, calling it a “heinous attack on innocent Syrians with banned chemical weapons.” He announced that he would be making a decision on a potentially “forceful” response “within 24 to 48 hours” and possibly by the end of the day. The White House announced Tuesday morning that the President would forgo his scheduled attendance of the 8th Summit of the Americas in Peru to oversee the response, further indicating the possibility of a military escalation.

The attack took place in Douma, the last rebel-held area of Syria. US Ambassador to the United Nations Nikki Haley expressed outrage at the UN, calling Syrian President Bashar Al-Assad a “monster” and stating that “once again, chemical weapons have been used on Syrian men, women and children.” The Ambassador exchanged harsh words with the Russian delegation at the UN, even going as far to say Russia’s hands are “covered in the blood of Syrian children.” Ambassador Haley urged for the UN Security Council to take action, “History will record this as the moment the Security Council discharged its duty or demonstrated its utter and complete failure to protect the people of Syria… Either way, the US will respond.”

An Israeli air attack on a Syrian military base following the chemical attack led to the deaths of at least 14, including 7 Iranian military personnel. Iran’s supreme leader said through a spokesperson that “Israel’s crime… would not go without response.” It is no secret that the two nations regard each other as the greatest of enemies so the incident contributes even more tension to the volatile situation.

Meanwhile, the USS Donald Cook, a tomahawk-armed destroyer has left its deployment near the Island-Republic of Cyprus and has headed toward the Syrian coast. Along its way, Turkish media has reported that the vessel was “harassed” by Russian jets that swooped low near the ship, also known as “buzzed”, an intimidation maneuver that the former soviet nation has been known to use in the past. The unsightly proximity of rival military personnel is certainly unsettling to the average citizen watching the situation unfold from their home television or computer. However, the Pentagon and US Navy have denied the accuracy of the Turkish reports.

Regardless of the accuracy of any reports, the presence of Russian, Iranian, Israeli and American military forces in such a small region is a potential recipe for disaster. And if the western allies decide to make a ground commitment, we could see a similar vacuum to what existed prior to the bloodbath executed by ISIS in Iraq, Libya and Syria. The United States may be forced to make a decision between the lesser of two evils- Assad and his Iranian allies or potentially extremist rebels such as ISIS who would surely inflict even greater humanitarian catastrophes.