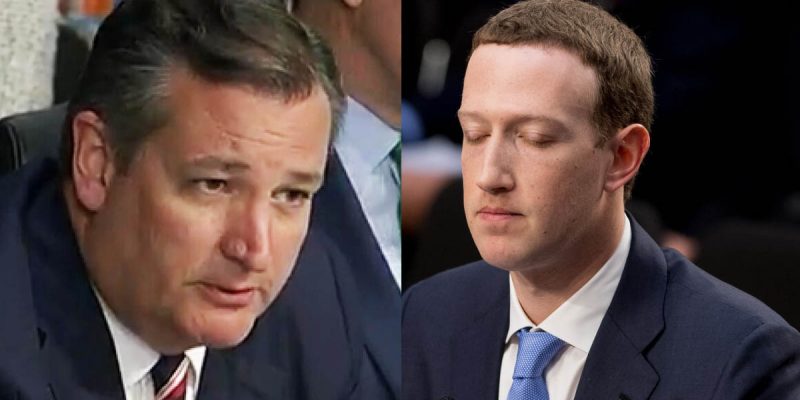 This, from the marathon testimony of Mark Zuckerberg, the CEO of Facebook, in front of a Senate hearing today was probably the most important five minutes of the session. It was Ted Cruz’ questioning of Zuckerberg on a crucial issue that later questioning by Dan Sullivan (R-Alaska) more specifically touched on – which is whether Facebook is a tech company or a publisher.

Obviously, if Facebook wants to take an editorial position that certain content which falls generally within the mainstream of American discourse, it has the right to do so but the market has the right to know – because if you’re going to be treated unfairly, or as a member of a suspect class, based on political beliefs you might hold, then that’s a sure signal to you that you’ll be wanting to move on from Facebook.

So Zuckerberg, who spent an enormous amount of time and effort during his testimony boasting that Facebook was developing artificial intelligence tools that would do an even better job of censoring content they don’t like, ran into a buzzsaw when Cruz turned the questioning toward the company’s bias…

This makes for a difficult problem for Zuckerberg, particularly as there are lots of conservative Facebook users who are ready to jump to a different social media platform out of consternation about stories like that of the pro-Trump black entertainers Diamond and Silk, who were recently banned as “unsafe for the community” by Facebook, and other right-leaning media organizations and personalities who have been “shadow-banned” – namely, having their content suppressed by Facebook’s content curators and algorithms based on its ideological leanings. We have our own story to tell in this regard, as our readers know.

He’s caught in an impossible position somewhat through his own actions, as he would have had a far more defensible position if he’d said Facebook was merely a tool for free speech and so long as content put there is legal he’s not exercising censorship or editorial functions. But some of his problem also comes from external pressures – the worst parts of the testimony were questions by Democrat Senators demanding even more censorship from Facebook against content they don’t like, like for example when Diane Feinstein fumed about Russian bots, or when Cory Booker demanded that “civil rights groups” have access to audit Facebook’s records to see if the platform is assisting realtors in targeting ads away from black Facebook users.

When Sullivan asked the specific question about whether Facebook was a publisher or a tech company, Zuckerberg answered that it was a tech company. That statement doesn’t hold water – not when he’s bragging about how he can better police content on his website or mobile app. And he knows it, which is why he’s left stammering like a teenager under Cruz’ questioning.