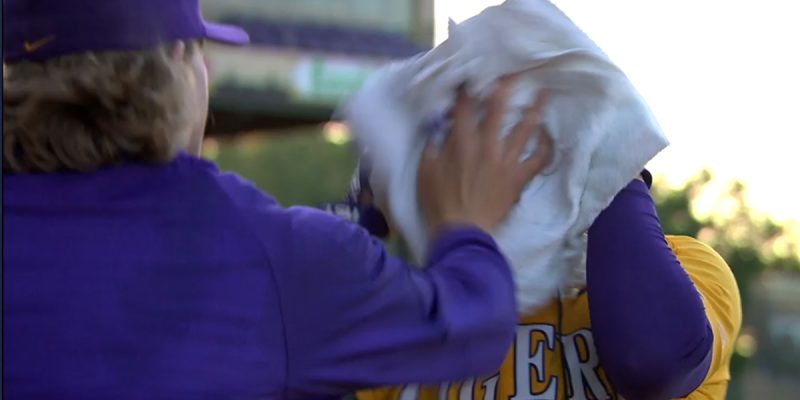 It was an interesting weekend for the LSU baseball team – which capped off a 4-0 week with a dramatic walkoff three-run homer by freshman Daniel Cabrera to finish a 9-7 victory over Tennessee Sunday.

Cabrera’s bomb was like something from a movie, as it came with LSU down 7-6 with two runners on in the ninth inning. The Tigers entered the ninth down 7-3 to the Vols, having struggled greatly for most of the game at the hands of Tennessee pitcher Will Neely. The crafty right-hander managed to bedevil an LSU lineup which had bombed Tennessee pitching for nine runs and 15 hits, including four home runs, in a 9-3 win on Friday and tied a season high with 17 hits in a 14-5 rout of the Vols on Saturday.

But Neely shut LSU out for the first three innings of the game while the Vols built a 4-0 lead, and then after LSU narrowed the game to 4-3 he slammed the door on the Tigers while Tennessee scratched across three more runs to seemingly put the game away.

Then came the ninth.

Chris Reid, pinch-hitting for Hal Hughes to open the inning, fired a grounder up the middle that was booted for an error. Beau Jordan followed Reid with a single through the middle, moving Reid to third. Zack Watson then grounded to short, but the throw to second base to put Jordan out was dropped – leaving runners on first and second with no out while Reid crossed the plate for a 7-4 score.

That was it for Neely, and in came fireballing righty Zack Linginfelter to face Antoine Duplantis – whom he promptly hit with a pitch to load the bases. Up came Austin Bain, who blasted a double to right center to plate Jordan and Watson. That was it for Linginfelter, as Tennessee head coach Tony Vitelli brought in Andrew Schultz in an effort to put the wheels back on the bus.

Initially, it seemed like that might work, as Schultz fanned Hunter Feduccia for the first out of the inning.

But then up came Cabrera, who’d been 0-for-4 heading into his last at-bat…

That, believe it or not, was LSU’s first walkoff victory of the year – despite the fact the Tigers had come back from deficits of four runs or more three times this year.

LSU stands at 24-13 and 9-6 in the SEC after a 4-0 week, placing the Tigers in second place in the SEC West and just a game behind Arkansas. In the next week there’s a decent chance of getting Bryce Jordan and Josh Smith back, with Brandt Broussard returning to action soon as well. It’s beginning to appear that Paul Mainieri’s Tigers might be coming on at just the right time despite the injuries – just as the coach, who earned his 1400th career victory with Cabrera’s walkoff bomb, always seems to have his team do.