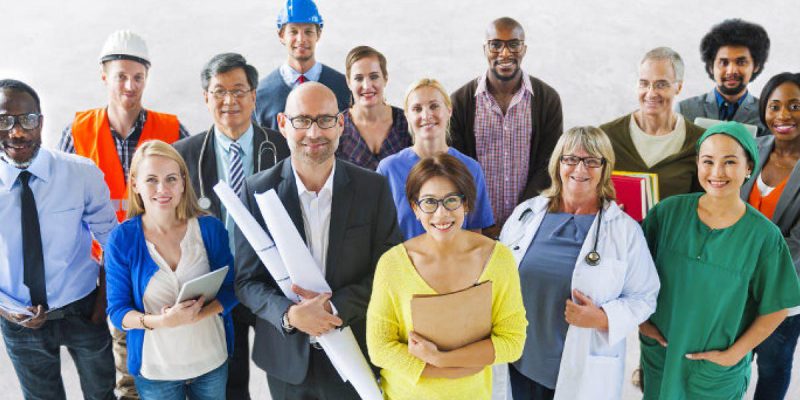 Sorry to be a little on the depressing side this morning, but we try to go where the data takes us and this particular bit of it isn’t good. It’s from the Center for Immigration Studies, and it’s on the H-2B visa program. That’s the one which provides legal entry into the country for low-skilled or unskilled non-agricultural workers. In other words, the folks who “do the work Americans won’t do,” but not quite. These aren’t minimum-wage jobs; they’re jobs like landscaping, custodial work and so forth.

And as it turns out Louisiana is one of the busiest states in employing H-2B visa holders. Here’s an image… 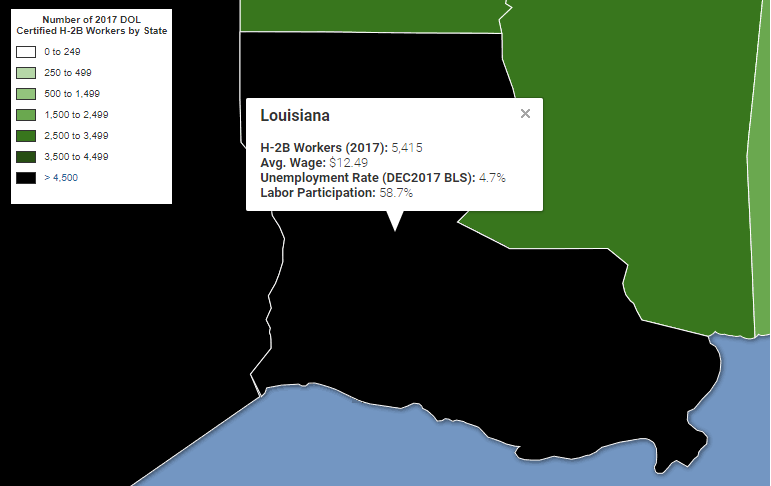 Next-door Texas, which has the highest number of H-2B workers as one might expect, is sitting on an unemployment rate of 4 percent and has a 63 percent labor participation rate.

In other words, Texas is taking in H-2B workers because their economy is bursting at the seams, they’re putting everybody to work and they still can’t fill all the jobs even for low-skilled people. More than 19,000 H-2B workers are on the job in Texas and they could probably take in more.

By contrast, Louisiana has the fourth highest number of H-2B workers despite a bit higher unemployment rate and a really poor 58.7 percent labor participation rate. That isn’t good. 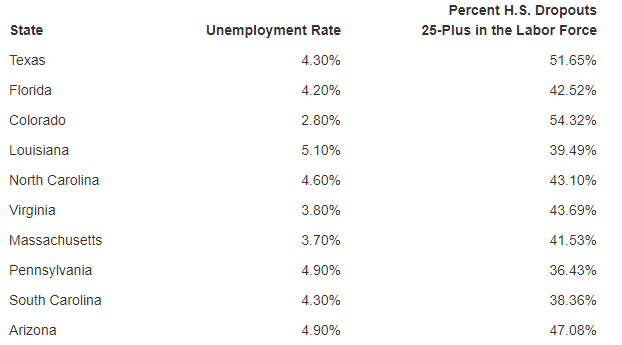 Those unemployment numbers are the 2017 average, as we understand it, which is why they’d differ from what’s shown above. And the reason the percentage of high school dropouts 25 years old or more matters is that’s generally the part of the workforce the H-2B people compete with for jobs.

The picture this paints is of a state which has too many people who won’t or can’t get off the stoop and work a job, so employers looking for people to put in entry-level work where they can learn a skill have to access H-2B people – in other words, importing Hondurans or Salvadorans rather than the local folks. In Texas they’re putting everybody to work; that’s not quite the case here.

Business leaders and members of both parties have long sought to expand the H-2B program because it avoids the need for these employers to compete for available U.S. workers. The program adversely affects opportunities for American workers with low education and skill levels.

Rather than enlarging this controversial program, lawmakers should instead consider more innovative ways to encourage Americans to enter into the work force. The editorial board of The Gazette in Colorado Springs suggested considering a work requirement for able-bodied adults on Medicaid, who make up 45 percent of Medicaid recipients in that state. Other initiatives could include programs that target churches and charity organizations that interact with under-employed Americans to direct them toward these opportunities.

That Louisiana’s employers would feel it necessary to import unskilled workers at an average wage of $12.49 an hour because they can’t find unskilled Louisianans who’ll show up to work, not steal things and remain sober on the job is a damned shame, and it’s a good indication that public policy needs to be made to incentivize the bottom rung of society – with both the carrot and the stick – to get to work. You don’t need a college degree to cut grass or mop a floor, and the skills jobs like those teach (showing up on time, conscientiousness, focus and the ability to take direction) will carry over to better-paying employment in time.

But when government assistance in Louisiana can get someone 20-30 percent above the federal poverty rate, people won’t go to work as often as they should. That’s what’s known as a perverse incentive, and it shows up fairly clearly in this study.