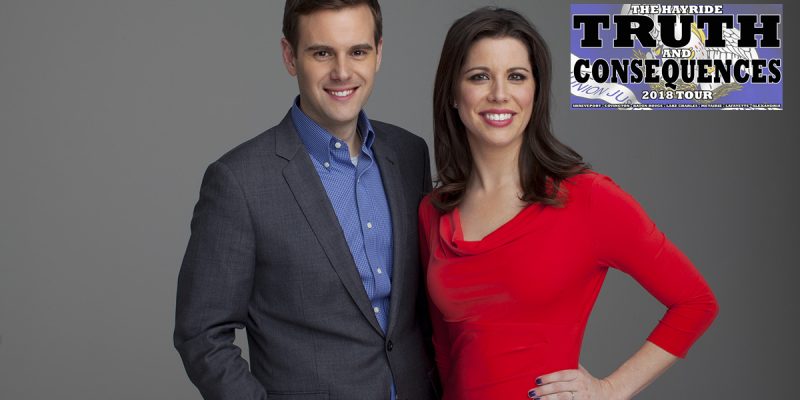 We’re stepping things up for the second half of The Hayride’s 2018 Truth And Consequences Tour, as a pair of national figures in Guy Benson, political editor of Townhall.com and a Fox News contributor, and author and journalist Mary Katharine Ham will be the headliners of the August 1 Metairie tour stop.

Authors of “End of Discussion: How the Left’s Outrage Industry Shuts Down Debate, Manipulates Voters, and Makes America Less Free (and Fun),” Benson and Ham will discuss political giving, donor privacy, and how government is eroding your right to free speech at our only tour stop in the New Orleans area.

The event will be held at 580 Woodvine Avenue in Metairie on Wednesday, August 1. We’ll start with a cocktail hour at 6:00 and dinner and the program will begin at 7:00. Click here to reserve your tickets, and do it quickly – we’re expecting a full room.

Guy Benson is the political editor of Townhall.com and a Fox News contributor. He was named to Forbes magazine’s 30 under 30 law & policy list in 2015. The Huffington Post included him in its 2017 roster of the 25 top millennial broadcasters in American news and politics. That same year, he received the College Republican National Committee’s biannual Lee Atwater Outstanding Young Conservative award. Guy served as a Media Fellow at Stanford University’s Hoover Institution, and a Visiting Fellow at Harvard University’s Institute of Politics.

Mary Katharine Ham is an American journalist and conservative commentator. She is editor at large of Hot Air, a contributing editor to Townhall Magazine, senior writer at The Federalist, and a CNN contributor. At CPAC 2014, she was presented with the ACU Blogger of the Year award. She was previously a Fox News contributor.

It’s going to be a great night. Those who attended the Hayride’s Metairie dinner last year told us it was a great event, and we expect this one will be even bigger. So don’t hesitate, and get your tickets now!