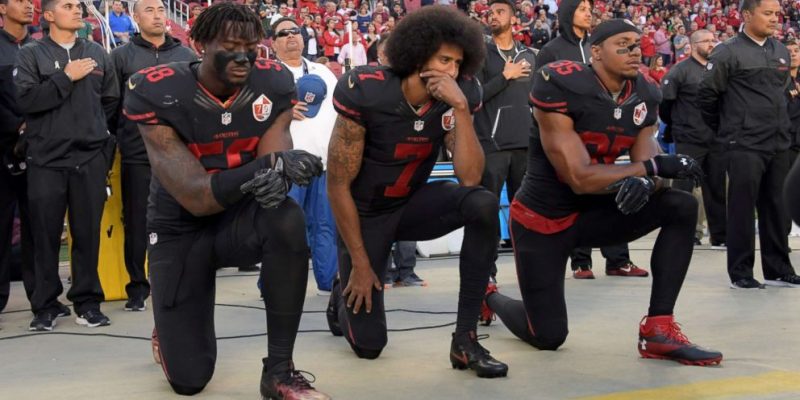 In accordance with instituting the anthem policy, the 32 NFL team owners also “reaffirmed their strong commitment to work alongside our players to strengthen our communities and advance social justice.”  This commitment will include “extraordinary resources” for programs that “promote positive social change in our communities.” According to NFL Commissioner Roger Goodell, “We are honored to work with our players to drive progress.”

While Goodell acknowledged a desire to strongly support social justice causes, he made clear his displeasure with the on-field anthem protests, which he claimed, “created a false perception among many that thousands of NFL players were unpatriotic.” With such an impression taking hold in the country, it was imperative that the NFL act before the start of the next season.

This decision is not the perfect answer for it does not require all players to stand for the anthem, but at least it is a better to have an official policy. Previously, the NFL had no policy, so the players were allowed to disrespect the National Anthem with no consequences. This new stance is similar to the official position of the National Basketball Association.

Of course, liberal activists were not pleased with the announcement. The head coach of the Golden State Warriors, Steve Kerr, called the policy, “idiotic.” Plenty of media personalities also slammed the decision as being unfair to players who wanted to protest.  For example, Marc Lamont Hill of CNN tweeted, “If the NFL players want to resist, they should ALL remain in the locker room during the anthem.”

While some players obviously supported the decision and chose to remain quiet, others decided to publicly condemn it. Pittsburgh Steelers cornerback Artie Burns called the new NFL anthem policy another type of “bullying.” Chris Long, a defensive end with the Philadelphia Eagles, said that the decision was made because of a “fear of a diminished bottom line.” He also claimed it was “not patriotism” to enact this new policy.

Not surprisingly, President Trump had a much more favorable response to the new NFL policy. Last year, he strongly condemned players who refused to stand for the National Anthem. He encouraged owners to fire any of their players who participated in the protests and tell them to get “off the field.”

This week, in an interview on Fox News, the President said, “You have to stand proudly for the National Anthem. You shouldn’t be playing, you shouldn’t be there. Maybe they shouldn’t be in the country…the NFL owners did the right thing.”

Of course, the President is correct. It is not too much to ask millionaire football players to show some basic respect toward their country by standing during the National Anthem. Those who refuse to stand are clearly insulting our brave military veterans who have sacrificed so much to allow our citizens the freedom to enjoy games such as football.

Football players earn outrageous salaries due to the generosity of hard working fans, including veterans, who pay for high priced tickets. Most of these fans expect NFL players to display reverence for the American flag and to stand for our National Anthem. A protest during this period is both inappropriate and insulting as there are many other ways NFL players can demonstrate their opposition to police tactics or the nation’s criminal justice system,

Last year, the anthem protests had a very negative impact on the NFL. In 2017, the average viewing audience for an NFL game plunged 9.7% to 14.9 million viewers. It was even larger downturn than the 8% decline in audience in the previous year. Obviously, there are multiple factors leading to the loss of viewers; however, it is undeniable that the National Anthem controversy was a major contributing factor last year.

The NFL owners’ decision is a step in the right direction, but it will not solve the problem entirely. If league officials hope the new policy will bring this issue to a resolution, they are sadly mistaken.

The anthem protests are going to continue in 2018 despite this new policy and the major investment the NFL is making in community-based organizations. The key reason is that liberal media organizations and social justice groups will continue to encourage and support players who participate. Nonetheless, players should understand that if they continue with these protests, it will only harm their careers. If there are any doubts, just ask unemployed NFL quarterback Colin Kaepernick.