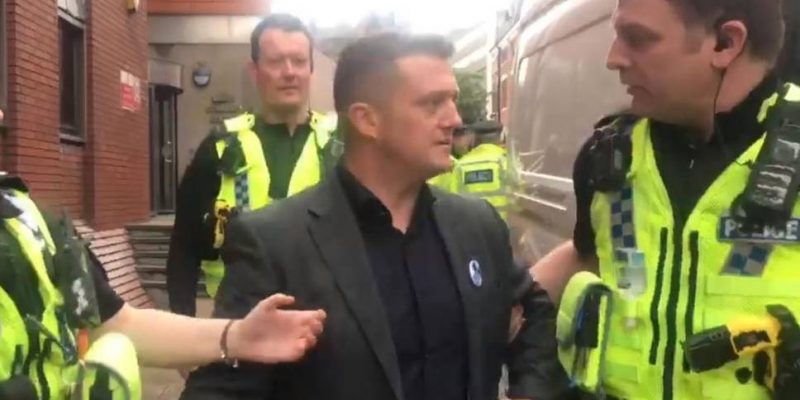 Earlier this month, we brought the story of English Defense League founder Tommy Robinson’s lawsuit against Twitter. Robinson was banned in March over violations of Twitter’s “hateful conduct” policy.

Now Robinson has much bigger issues to deal with. He was arrested on Friday after videotaping and asking questions of defendants in a “child grooming” sex abuse trial in Leeds.

Now the UK has become atrocious on issues of free speech and freedom of the press. The country has crafted laws on speech that have restricted what people can and can’t say, often in the name of political correctness.

Did Robinson get caught up in those restrictions? Is his arrest an example of British political correctness and tyranny run amok? Not exactly.

If you read Robinson’s defenders, they will tell a story like this. “Robinson was just reporting on the child grooming trial because the British government was covering it up. He was arrested for exercising his free speech rights and sent to prison after an hour-long secret trial for 13 months. The court has forbidden coverage of Robinson’s case. Finally, Britain has become a police state on the way to imposing Sharia law.”

Let’s take this story apart bit by bit because there are some half-truths here, along with lack of knowledge of British law.

First up, the arrest of Robinson itself. Robinson was outside the Leeds Crown Court live streaming on his Facebook page of himself asking the defendants questions. He was arrested for breaching the peace and incitement.

Now here’s where it gets interesting. The judge in the child grooming case upgraded the charges to contempt of court. Contempt of court has a different definition in the UK and restricts what the media can cover during a trial. This article from The Guardian illustrates the differences between the UK and US.

Because the “child grooming” trial involved the sexual abuse of minors, the judge imposed a reporting ban on the trial. It means that reporters cannot cover or report the trial until it is concluded. The British do this instead of jury sequestration as noted by Wikileaks.

The use of reporting bans is common in the UK, Canada, Australia and NZ. Rather than sequestering a jury the judge bans the ears of the whole population. This is widely abused. As the joke goes, "Difference between the judiciary and God?" A: "God knows he's not the judiciary".

The British justify this as necessary to protect both accusers and defendants and to protect the right to a fair trial. In the UK, prejudicial reporting has led to mistrials and cases being dismissed.

Robinson’s broadcast was in violation of the reporting ban. He was arrested and then charged with contempt of court as this screenshot from the Leeds Crown Court shows.

Why was Robinson tried so quickly and then sent to prison? Because he did not actually go on trial. Robinson was under a suspended sentence for a similar action in 2017. The judge likely just simply activated the sentence because Robinson violated the terms of that sentence, which was to not videotape defendants outside of courtrooms. In fact, video cameras are banned in English courtrooms.

Also, there is no cover-up of child grooming. The alleged rapists are already in custody and are currently on trial. Robinson’s “reporting” has accomplished nothing here.

Finally, is this an example of Britain becoming a police state? Hardly. What we have is a conflict between two fundamental and important rights, freedom of the press and the right to a fair trial. The British have chosen to resolve that conflict differently than America did.

If I was British, I would support scrapping the reporting bans. They’re effective when the only sources of news were newspapers and the BBC. But in this era of social media, they cannot be enforced. Instead, the UK should introduce jury sequestration for high profile cases like this one.

What happened to Robinson could never happen in America. For starters, such broad reporting bans were ruled unconstitutional by the U.S. Supreme Court in 1976. This would not even be an issue in this country.

Is this another example of Britain descending into tyranny? Not really. Robinson brought this arrest on himself by violating a reporting ban and the terms of his suspended sentence. Going to a courtroom under a suspended sentence is just stupid.

Britain has major problems with freedom of speech and freedom of the press, but this is not one of those cases. Robinson was grandstanding and he paid the price for it.

Interested in more national news? We've got you covered! See More National News
Previous Article Best States 2018: Louisiana Ranked Dead Last
Next Article It Was A Memorial Day To Remember At The Louisiana Capitol, But Not For Anything Good…