…as the House voted to raise your taxes today. The vote was 76-28, which was an uptick from the 64-39 vote on Rep. Lance Harris’ HB 27 on Friday. As the bill needed 70 votes for passage, the second try today at the state capitol was the one which put it over the top.

Here’s the final tally on the bill… 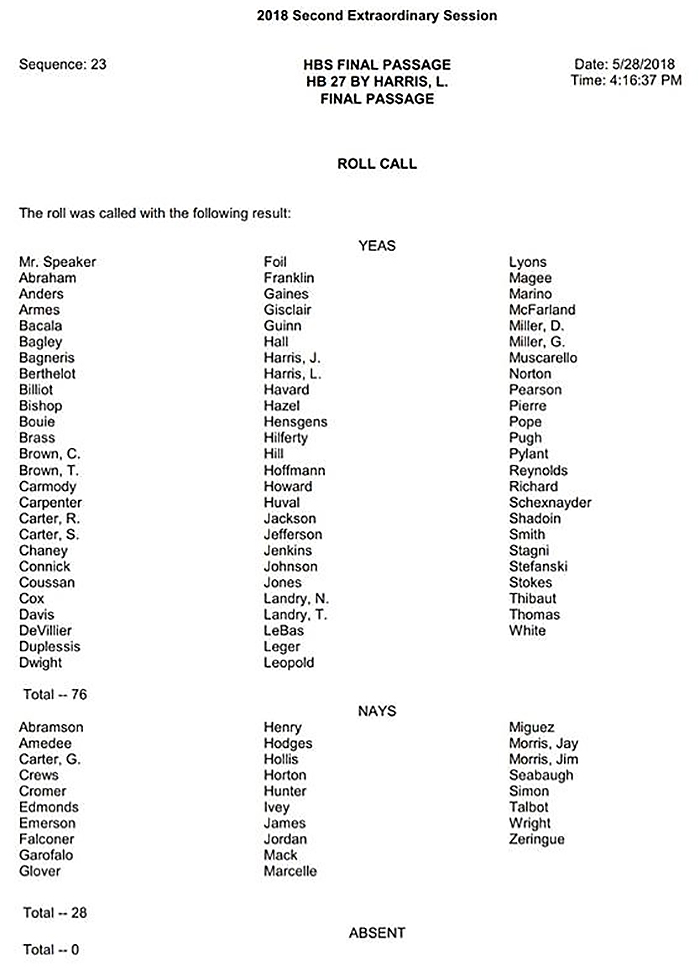 What made the difference between failure on Friday and passage today was that 10 Democrats, all members of the Legislative Black Caucus, flipped from “no” to “yes” over the weekend. Coupled with a pair of Republicans – Julie Stokes and Tanner Magee – who were opposed on Friday, that made for a 12-vote spread between the first and second attempts and pushed the bill, worth some $369 million in tax increases, to the Senate.

The Black Caucus getting on board with the bill and carrying it to passage was a relatively key point, in that the Democrats can no longer fault Republicans for being obstructionist or accuse Harris, the House Republican delegation chair, of failing to deliver his members. Harris got the majority of the delegation to vote for the bill the first time, and today he delivered 39 out of 61 Republicans for something they’re not supposed to be for – namely, a one-third cent increase in the state sales tax to replace the penny set to expire on July 1, plus a “cleaning” of exemptions to state sales taxes.

Harris is going to claim a win, in that his bill also requires state government to make cuts equal to 1.33 percent of its current spending levels – and to make real, actual budget cuts to a government at all is a true accomplishment. Even so, nobody on the Right is going to be ecstatic about having voted for a tax increase.

For example, here was a statement Rep. Reid Falconer (R-Mandeville) put out following the passage of HB 27…

“When the Legislature reluctantly approved a sales tax two years ago to fill a budget gap, it was intended to be temporary,” said Rep. Reid Falconer (R-Mandeville). “It’s about to expire, and that’s what was meant to happen. Reducing it from 1 percent to 0.33 percent and extending it for five more years isn’t what we promised the people of our state two years ago. The expiration of this sales tax wasn’t a surprise. The Administration has had two years to find sufficient cuts to balance the budget, but keeps coming back with the same answer: taxes, taxes, and more taxes.

“Gov. Edwards’ latest threat was that if HB 27 failed, we would lose funding for Court Appointed Special Advocates (CASA), which is a great program,” Falconer said. “Two weeks ago, he was threatening to evict seniors from nursing homes. Then it was TOPS funding. Two years ago, he was threatening to cut LSU football. Email, phone lines, cable TV and even the elevators at the Capitol all work, but no matter how many times we try, we can’t seem to get the message to the Fourth Floor that we cannot tax Louisiana into prosperity. Today, we couldn’t even maintain the same message in the House.”

Where things get interesting with respect to Harris’ bill is what happens next. Harris has made it very clear that he will not support any attempt to add additional taxation to his bill when it gets to the Senate, but that is precisely what is expected to happen. The bill is likely to land in the Senate Revenue & Fiscal Affairs committee, chaired by left-wing New Orleans Democrat J.P. Morrell, and it would be a miracle if it remained a one-third penny increase in the state sales tax seeing as though Gov. John Bel Edwards and his team has demanded a half-cent increase at minimum throughout the budget process.

But if the one-third becomes one-half, and the bill comes back to the House, what happens then? Does Harris pull the bill as he’s threatened to do? And do House Republicans who hung themselves out to dry with constituencies which are decidedly against tax increases of any kind stick with him in torching the bill? It would seem like an awfully tough political position to be in if as a House member you’re on record for voting in favor of tax increases and the governor ends up employing irresponsible tactics like evicting seniors from nursing homes in the event no taxes are passed.

But on the other hand, if a one-third penny bill becomes a half-penny bill when the Senate is through with it, it seems impossible to imagine there would be 70 votes for it. At least seven of the Republicans who voted for the bill today would be expected to walk.

And with no tax increases there is not much possibility that the budget would look any different than what Edwards vetoed during the regular session.

Which brings us to the other interesting item at the Capitol today, namely the budget. As yet, there has been no official budget bill filed for the current special session. Rep. Cameron Henry, as the House Appropriations Committee chairman, is charged with bringing the budget bill, HB 1, to the process and Henry hasn’t filed it yet. Appropriations is scheduled to meet tomorrow and it’s foreseeable that Henry will file the bill before then, but with a very short time frame before the scheduled end of the current special session an opportunity arose for the Democrats to short-circuit the budget process and Rep. Walt Leger took it.

Leger has a bill, HB 26, which is a Democrat version of the budget that anticipates some $648 million in increased tax revenue, and he went to the floor with a motion to discharge the bill to the floor and have the whole House vote on it. Leger said he was doing so because his bill hadn’t been put on the Appropriations calendar, and this was his only chance to have it heard, and that led to a heated objection by Henry who opined that it was violative of the state constitution to bypass the Appropriations Committee. His point was that for the state to spend $30 billion without a public hearing on how to spend it was more than a little bizarre, and things got heated before Henry told Leger that if he would drop his discharge motion he’d put Leger’s bill on the Appropriations calendar for Tuesday. Leger consented.

Whereupon Henry played his own card – namely, that he made a motion for a vote on an override of Edwards’ veto of the budget passed in the regular session. Henry said that if House members were so exercised over the need for an expedited budget process in order to avoid a third special session of 2018, overriding the veto of the budget was the best way to do so. He’s technically correct in this – overriding the veto brings HB 1 to life without the necessity of a new bill filing or an Appropriations hearing, and what the House could do is to then work on a supplemental budget bill which appropriates the money raised by the passage, should it occur, of Harris’ sales tax bill.

This is what would have happened had Edwards not vetoed the budget in the first place.

But Henry’s proposal fell far short of the 70 votes it needed, getting only 52 votes in favor. There were 10 Republicans who voted against it…

The motion wouldn’t have passed anyway, but it’s still somewhat troubling those members essentially voted to ratify Edwards’ veto of the state budget. If you want to take that as a slap at Henry, you might not be wrong – and if you want to take it as an endorsement of Edwards’ budget tactics you wouldn’t be wrong on that, either.

All in all, not the greatest of days in the history of the Louisiana legislature – but for drama and interesting story lines, Monday was a Memorial Day worth its name.