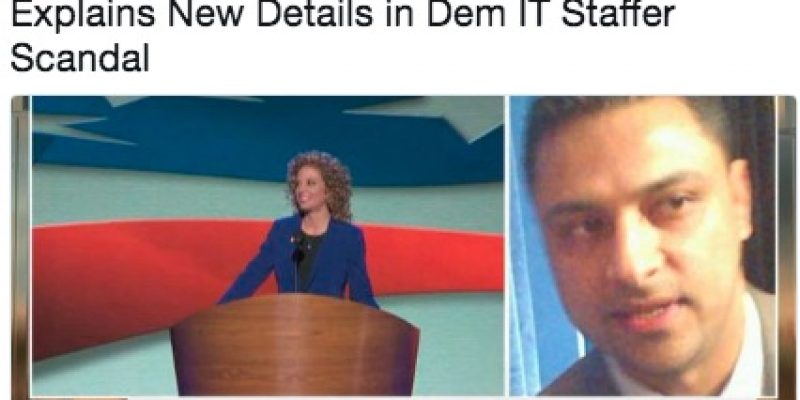 Luke Rosiak of the The Daily Caller reported that Imran Awan — the former IT aide of over ten years to DNC chairwoman Rep. Debbie Wasserman Schultz, D-Fla., took a laptop with him in 2017 after he was banned from using the House of Representatives’ computer network for “unauthorized access to data.”

Awan also left the laptop with his username “RepDWS” “in a phone booth with a letter to prosecutors” in April 2017.

“This is like straight out of James Bond,” Rosiak said on “Fox & Friends First.”

A Pakistani IT aide, who had just been fired by all his other employers for being a suspected hacker, left a laptop with the username RepDWS in a phone booth. The laptop was placed next to a letter to prosecutors. What it said is not publicly known. The cache of documents also included copies of Awan’s ID (which assured that police tied the laptop to a criminal suspect and seized it as evidence rather than returning it as lost property) and a note that said “attorney client privilege,” which put the laptop into legal limbo.

President Trump tweeted that he wants access to documents “held by the Pakistani mystery man.”

Just heard the Campaign was sued by the Obstructionist Democrats. This can be good news in that we will now counter for the DNC Server that they refused to give to the FBI, the Debbie Wasserman Schultz Servers and Documents held by the Pakistani mystery man and Clinton Emails.

Awan is awaiting trial for bank fraud. In the meantime he was enrolled in a High Intensity Supervision Program with curfew restrictions after his July 2017 arrest. He pled not guilty. All of his scheduled hearings have been postponed. Shultz had kept Awan on the payroll for months even after a criminal investigation was launched into Awan and after he was barred from the House IT network.

Interested in more national news? We've got you covered! See More National News
Previous Article We’re Going To Find Out Soon How Much JBE And His Allies Want To Fix Medicaid Fraud…
Next Article Is a “free range” parenting law coming to Texas?