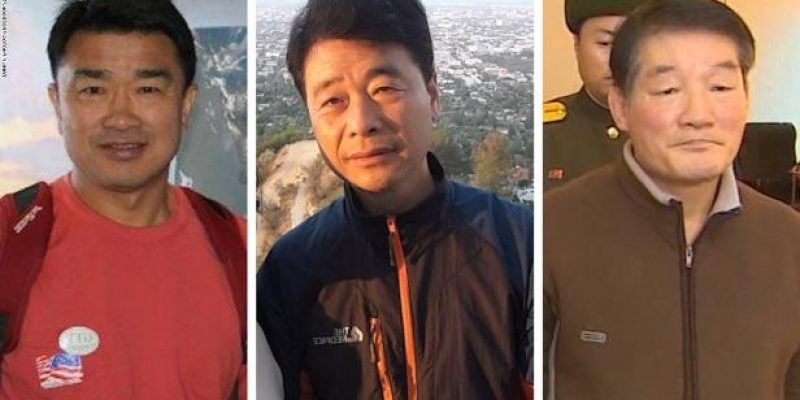 The three Korean Americans freed by North Korea after President Trump’s historic peace negotiations between North and South Korea, are on their way home. They are Kim Sang Duk, Kim Hak Song, and Dim Dong Chul. The first two were arrested and charged in 2017; Dim Dong Chul was arrested in 2015 and again in 2016.

According to the Straits Times, Kim Hak Song worked at the Pyongyang University of Science and Technology (PUST) overseeing agricultural development at the school’s farm. PUST was founded by American evangelical Christians and opened in 2010. It has a number of American faculty members.

North Korean military police arrested Song at the Pyongyang railway station in May 2017 on suspicion of committing “hostile acts” against the government. What were these hostile acts? Being an American Christian? It doesn’t matter because there is no due process in the communist country of North Korea.

Kim was born in Jilin, China, educated at the University of California-Riverside, and became a U.S. citizen in 2000. One of his friends told CNN, “He was a very diligent, hardworking man determined to help people in North Korea.”

He was looking at being detained in prison forever, with no chance of ever being released.

Kim Sang Duk, known as Tony Kim, was also a teacher at the Christian-funded PUST. He was arrested in April 2017 at North Korea’s main airport as he was leaving the country after he taught for several weeks. What was his crime? Being an American Christian?

The AsAmNews (Asian American News) reports that Kim is a former professor at Yanbian University of Science and Technology in China, located near the Korean border. South Korea’s Yonhap news agency reports that Kim was involved in relief work helping children who lived in the rural areas of North Korea and volunteered at an orphanage. He is described as a “religiously devoted man.”

His son posted on Facebook that ever since his father was arrested his family has had no contact with him.

He was arrested and imprisoned with no chance of ever getting out of prison, let alone the opportunity to defend his innocence.

Kim Dong Chul was born in South Korea and later became a naturalized U.S. citizen who lived in Fairfax, Virginia. He was arrested on charges of subversion and espionage in April 2016 and sentenced to ten years of hard labor. What was the evidence? Was he able to defend himself? Could he appeal?

There is no due process in the communist country of North Korea.

Chul was first arrested in October 2015 after he reportedly received a USB stick “containing nuclear-linked data and other military information from a former North Korean soldier.” However, in January 2016, Kim told CNN that his business involved managing a trading and hotel services company in Rason, located in a specific economic zone near the border of North Korea, China, and Russia.

One month before his trial, Kim read a statement at a North Korean government-arranged press conference in which he apologized for “attempting to steal military secrets” and for “[colluding] with South Korea.” South Korea denies any involvement with Chul.

This is what communism looks like: arrested and charged without evidence or with false evidence. No representation, no judicial freedoms protected by the Bill of Rights, and indefinite imprisonment with little-to-no contact with family, the outside world, or any chance of appeal.

The BBC reported that “their convictions have been widely condemned as political and an abuse of human rights.”

The Kim family published a statement about the release of their family member:

Statement from Tony Kim’s family on his release from North Korea pic.twitter.com/pzDasNyMmp

Thank God for President Trump who plans to personally greet the men upon their arrival to the U.S. tomorrow.