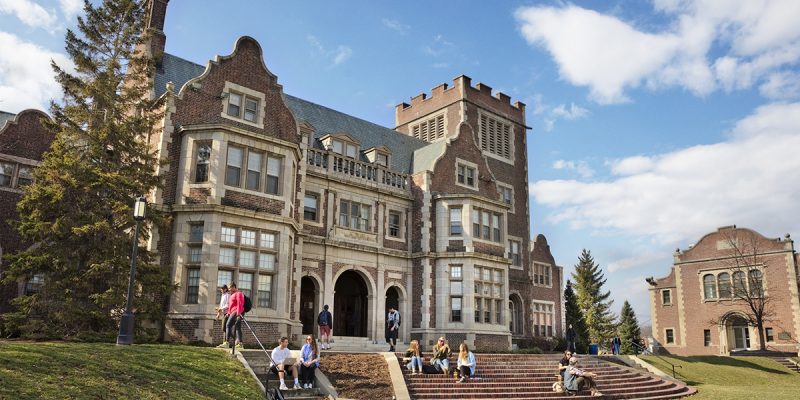 …because we’re pouring unjustifiably large amounts of resources down what is fast becoming a bottomless pit of leftist grievance and surrealism disguised as higher education.

Hobart and William Smith Colleges is offering a course next year to teach students how “objectivity” and “meritocracy” function as “white mythologies.”

“White Mythologies: Objectivity, Meritocracy, and Other Social Constructions” is a sophomore-level course taught by Kendralin Freeman and Jason Rodriguez, who are sociology and anthropology professors, respectively.

“This course explores the history and ongoing manifestations of ‘white mythologies’—long-standing, often implicit views about the place of White, male, Euro-American subjects as the norm,” explains the course description, which adds that students will also “explore how systematic logics that position ‘the West’ and ‘whiteness’ as the ideal manifest through such social constructions as objectivity, meritocracy, and race.”

Though neither Freeman or Rodriguez responded to a request for more information from Campus Reform, both professors have worked together for a few years, and notably co-authored an article in the journal of Whiteness and Education together.

In that article, Freeman and Rodriguez argue that despite the good intentions of white students and community members, calls for “intersectionality” and “diversity” on campus may actually “derail dialogue about racism” and inadvertently “recenter whiteness.”

They also contend that efforts to increase minority representation on college campuses may actually promote white privilege, as well, since those diversity efforts are often couched in neoliberal sloganeering as opposed to an acknowledgment that racism still exists.

“Diversity measures are rarely presented as tactics for addressing the unfair, systematic advantages that white subjects experience, but are instead framed as either avenues for addressing historical injustices or issues of simple underrepresentation,” they write.

“In the absence of any discussion of the ongoing structural relations that produce minority underrepresentation and white privilege, this is particularly easy to co-opt into the ideology of ‘culture of poverty’ or to denounce in the name of meritocracy,” they add.

Tuition at Hobart and William Smith was $52,000 this year.

Sure, that’s just one example. Let’s understand it isn’t alone. That there is an entire academic journal called “Whiteness and Education” is a pretty good indication that the rot has spread far beyond Hobart and William Smith and in fact didn’t even start there.

At the “Whiteness and Education” website, you’ll find such entries as…

Immersed in the struggle: confronting whiteness in a sea of whiteness

A privileged perspective: How a racially conscious White male teacher interacts with his students

Speaking the unspeakable: the role of speech in a pedagogy of critical whiteness

Hauntings and entanglements of race: re-reading the journals of an early American missionary woman in Hawai‘i

And other scintillating titles.

Back to our main example – that’s actually a course teaching kids that objective reality is a construct of straight white racist men imposed on oppressed women, gays and racial minorities in Western countries. Almost literally that “2+2=4” is oppression and tyranny. And that the concept of meritocracy, that your rewards should derive from doing an objectively good job and meeting or exceeding identifiable standards, is racism.

There’s an awful lot to unpack in that, of course, not the least the noxious racism it carries within it – that somehow people of non-European descent aren’t capable of merit. Tell that to LeBron James, or Aliko Dangote – the Nigerian sugar, cement and oil tycoon who’s worth $14 billion. Or Oprah Winfrey. Tell it to the Japanese and the Koreans, whose entire societies are built on slavish pursuit of objective merit. Or Abigail Johnson, whose female gender doesn’t seem to hold her back as the CEO of Fidelity Investments with a net worth of $16 billion. The idea that you have to be a straight white male to survive in a society which deals in objective realities and the pursuit of merit ought to be most offensive to the people supposedly oppressed by that society, because it sells them so woefully short.

This is the very essence of cultural Marxism. It’s seditious and highly destructive. One of its products is this seemingly growing concept that because racism requires a power structure to enforce, black people can’t be racist – how any multiracial society can hold together with such destructive rot being allowed to grow is far beyond our understanding, and yet it’s our universities spreading it with courses for credit like the one at Hobart and William Smith.

It’s time we began undertaking a serious examination of exactly what it is we’re paying for in higher education. At a time when there are more unfilled jobs than applicants, and when a dearth of people in the skilled trades coincides with a generation of unemployables with college degrees still living at home and buried in more than a trillion dollars in student loans, it’s clear our universities are doing a terrible job of serving our society – and for a far larger cost than is justifiable.


Interested in more national news? We've got you covered! See More National News
Previous Article BAYHAM: The “Baker” Case Is A Key Victory For Liberty Before The Supreme Court
Next Article BATISTE: LaToya Cantrell Isn’t Radical Enough For Jarvis DeBerry And The Times-Picayune