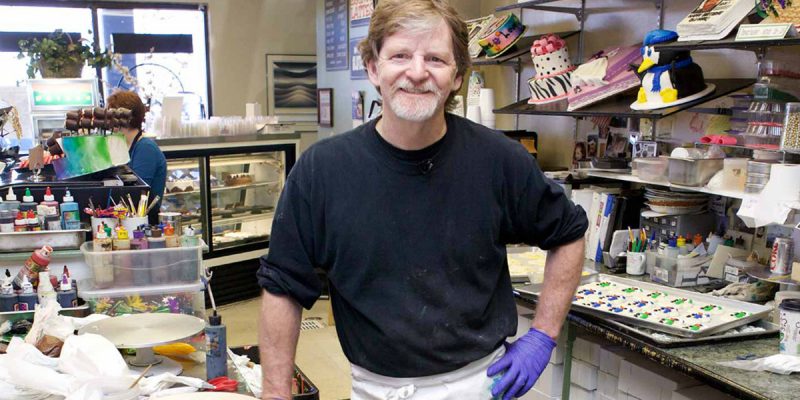 Meet Jack Phillips, baker and owner of Masterpiece Cakeshop located in the Denver suburb of Lakewood.

Six years ago David Mullins and Charlie Craig entered Phillips’s business and requested him to create a cake for their same-sex wedding, which was being officiated in Massachusetts as gay marriage had not been legalized in Colorado.

Phillips refused their request citing his religious beliefs.  Mullins and Craig claimed they were humiliated by the experience and promptly sicced the state of Colorado on the baker.

However one should wonder how the gay couple could have been truly humiliated by Phillips’s treatment of them.

The Christian pastry artist explained why he did could not in good conscience bake their cake, offered to sell them one of his already made cakes, and recommended other cake shops that have produced cakes for same-sex weddings.

Phillips had made accommodations that comported with his religious beliefs while ensuring that the couple had an avenue to procure exactly what they wanted from another shop that offered the customized service they sought.

If this is how this couple defines being humiliated then they would be wise to avoid going to a fast food drive up window after 10 PM.  Phillips was sincere while Craig and Mullins were vengeful.

Phillips was hauled before the Colorado Civil Rights Commission, the unelected commissars charged with enforcing “tolerance”, where he and his religious views were mocked and denigrated by the body before being ordered to violate his beliefs, undergo “indoctrination” along with his staff, and for a two year period “check in” with the commission as if he were some kind of criminal having to make regular reports with a parole officer.

Thankfully Phillips had the gumption to fight this unconstitutional abuse of authority all the way to the US Supreme Court.

Phillips’s legal counsel brought to the court’s attention the baker’s trip through the state gauntlet with Justice Anthony Kennedy remarking during oral arguments that “It seems to me that the state has been neither tolerant nor respectful”.

The established media is correct: though the ruling in favor of Masterpiece Cakeshop was by a 7-2 margin, with liberal justices Stephen Breyer (appointed by Bill Clinton) and Elena Kagan (appointed by Barack Obama) joining the Republican-appointed majority, the actual opinion did have a narrow scope.

The Supreme Court ruled that religious views and their expression are protected under the Constitution and that the Colorado Civil Rights Commission had “showed elements of a clear and impermissible hostility toward the sincere religious beliefs motivating his objections”. Much larger and far reaching constitutional questions were left on the table.

Members of the commission embraced the defamatory linkage of Phillips’s faith with those who used religious to justify slavery and the Holocaust.  If you’re not with the Leftist agenda, you’re a Nazi.

The court also pointed out that the same arguments used by those bakeries that had successfully refused service to customers requesting cakes containing messaging counter to the promotion of homosexuality that had been blessed by the Colorado Civil Rights Commission had been denied to Phillips.

One can’t help but wonder if Roland Friesler was presiding over this kangaroo court of a commission (there’s more justification for this unkind analogy than the commission’s).

In non-legalese, the Colorado Civil Rights Commission behaved like a bunch of anti-Christian bigots, not that it should surprise anyone though it’s nice that their boorish treatment of a Christian business owner is now part of a court record and has been promulgated to some degree (not so much by the Fourth Estate).

The ruling should have been unanimous but Justices Ruth Bader Ginsburg and Sonia Sotomayor essentially endorsed that the unequal application and enforcement of the Rocky Mountain State’s anti-discrimination laws by a highly prejudiced public board was irrelevant.  They put the advancement of the progressive social agenda before actual civil rights and the concept of a fair hearing by a government body.

That’s disturbing yet it underscores “RBG’s” Rockstar status with the fringe Left.

Though the leftist special interests will claim the ruling meant something other than it was for the sake of firing up their base for the mid-terms and motivating them to write checks, the true ruling was that the state board did not have a license to brazenly discriminate against religious people, which is precisely what happened.

The court case not only reinforced that an individual’s religious views cannot by summarily dismissed in civil rights matters, but just importantly exposed the Colorado Civil Rights Commission for what it is: a collective of leftist ayatollahs utilizing the power of the state to harass individuals who don’t offer false sacrifice to their agenda.

Interested in more national news? We've got you covered! See More National News
Previous Article John Bel Edwards Is Doomed To Be Forgotten
Next Article At Some Point We’re Going To Have To Address The Rot In Our Universities…