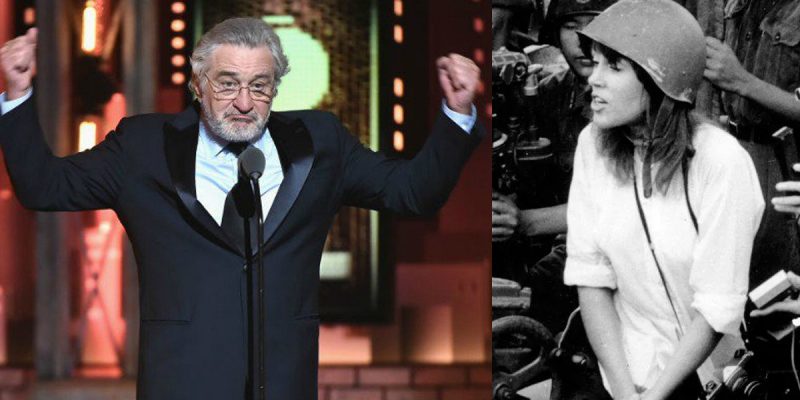 Like Gloria Swanson’s brilliantly scary portrayal of Norma Desmond in the film Sunset Boulevard, the fading actor is more famous for what he’s done in the past than he has in recent times. And like Desmond, Robert De Niro has become more than a little bit kooky.

Recall his “tough guy” soliloquy filmed in black and white in October 2016 where De Niro hurls multiple profanity-laced insults at then-Republican presidential nominee Donald Trump in addition to declaring “I’d like to punch him in the face.”

Needless to say De Niro’s contribution to the election discourse and those of other celebrities were dismissed by the voters as Trump went on to lock up the largest electoral vote total of any GOP presidential candidate since 1988.

And like any entitled brat who didn’t get his or her way, De Niro did not accept the results with dignity or class.

The increasingly irrelevant De Niro was tapped to introduce rock legend and star of one of the most coveted tickets on Broadway, Bruce Springsteen, at the 2018 Tony Awards.  Far be it from someone who has made a fortune reading lines to simply follow the script and instead the Raging Bull delivered a tirade coming off in the persona of the aspiring presidential assassin character he played in Taxi Driver.

As De Niro strode out on stage he yelled out “I’m going to say one thing – F**k Trump!” and then flexed his arms like the aged Mandelbaum character from Seinfeld.

And like all egomaniacs in front of a camera and a live mic, proceeded to say more than his “one thing,” screaming out, after another sad old man double-fist pump, “It’s no longer ‘Down with Trump!’, it’s ‘F**k Trump!’”.

Of course the tirade resulted in a gleeful standing ovation by De Niro’s brethren in the “we read lines but with feeling” community, for Broadway is to the far left of Hollywood.

Remember, these were the same people who lectured Vice-President-elect from the stage of Hamilton, heckled the Indiana governor from the orchestra seats, and reenacted murdering an actor dressed as Trump in Shakespeare in the Park.

As previously covered, the theater crowd were some of the most eager participants in the “Resistance” as Broadway hosted a number of shows shortly after Trump’s election fear-mongering the new administration.  There was the paranoid Building the Wall production that fantasizes about Trump’s removal from office and exile from the United States after he constructs concentration camps for Mexicans and Muslims.

And then there was 1984 the play, whose promotional materials were loaded with Trumpian imagery.

After that bizarre and gore-filled misinterpretation of the George Orwell classic got sent down the Memory Hole (for even the decidedly anti-Trump denizens of the five boroughs can digest only so much political absurdity), the Hudson Theater rotated its anti-Trump stock with The Parisian Woman, starring Uma Thurman.

Sold as a Broadway version of House of Cards, it shows a scheming liberal couple willing to do anything to attain power to advance the leftist agenda, including Thurman’s character having engaging in a torrid affair with the daughter of a major Trump donor (and using said tryst as blackmail).

In one of the last scene’s Thurman’s character delivers a moralizing a profane screed (noticing a trend?) about the need to fight the Trump agenda, leading to, wait for it, a rousing ovation from the smug assembled audience and an instinctive shout of “You wonder why you lost!” from this writer from the back-orchestra section.

But back to De Niro for his act and the thunderous applause he received is relevant: his tirade on national television received coverage from the world media on the eve of President Trump’s meeting with North Korean leader Kim Jong-Un- an unprecedented diplomatic exchange between the two nations with tremendous stakes for regional peace and denuclearization.

While Manhattan might scoff at Pyongyang, thousands of folks in Hawaii were saying what they thought were their final goodbyes to loved ones when an errant missile launch alert was broadcast over people’s smartphones.

And this is how De Niro and Broadway sets up the President of the United States before such a critical meeting?

It borders on treasonous as it could not possibly help the United States’ bargaining position going into the negotiations and may very well be the most disgraceful act by an American celebrity since Jane Fonda “manned” a North Vietnamese anti-aircraft gun during the Vietnam War.

De Niro and the rest of the leftist entertainment cult proved that they are petulant self-centered thespians first and Americans only when a member of their party is in the White House.

The sad little actor who wanted to punch Trump in the face ought to have some sense knocked into him.