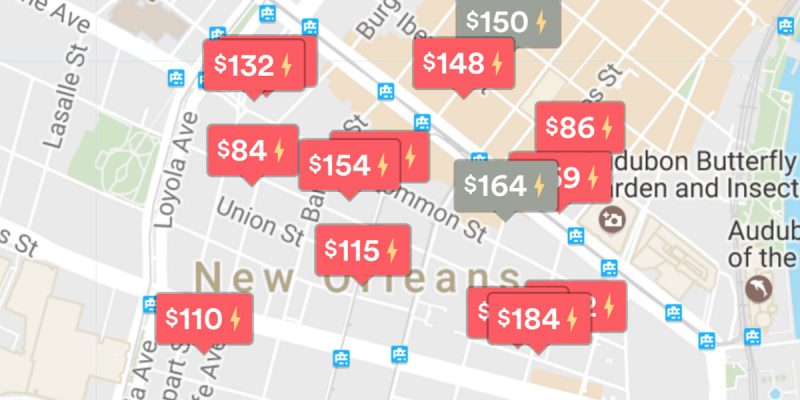 That seems to be the only judgement anyone can come to from viewing the ongoing back-and-forth between the City of New Orleans and the short-term rental apps like VRBO and Airbnb.

Airbnb has removed New Orleans’ pass-through registration system from its website, a system seen as an important enforcement tool for city inspectors who use the tool to identify properties in violation of city regulations.

The pass-through registration system allows short-term rental hosts to automatically apply for a city license when they list their property on the Airbnb website. A key feature of the registration included publicly posting license numbers, which allowed city inspectors to match licenses with property owners and addresses.

Airbnb does not otherwise reveal the addresses of properties on its website, which has made unlicensed properties more difficult to find for enforcement purposes. With the removal of license numbers from Airbnb’s site, city inspectors will now have to use other methods to identify short-term rentals operating afoul of city regulations.

Short-term rental hosts can still post their license number in their property’s description, but it is no longer entered as a default option connected to the pass-through registration system.

This came two weeks after the New Orleans City Council voted to ban the issuance of short-term rental licenses in all the desirable parts of the city, which is something which will inevitably result in a court case New Orleans will lose. The ban, as it happens, also signifies that New Orleans busted a deal it had made with AirBnB…

Airbnb said in a statement that its pass-through registration system was part of the city’s landmark agreement in December 2016 to regulate short-term rentals, and it is being removed because the new regulations the council adopted are in conflict with the platform.

“We’ve been working in partnership with the city of New Orleans for the past two years, implementing a package of enforcement tools, including data sharing and a pass-through registration system, tailored to the city’s new short-term rental rules passed in December 2016,” Airbnb spokeswoman Laura Rillos said. “The city changed the rules in May 2018, and these unilateral changes are incompatible with one of the enforcement tools, the registration system previously available through Airbnb.”

Rillos added: “While our competitors have sat on the sidelines, we have collected and remitted taxes and the affordable housing fee. We have also complied with all data requests. Going forward, we are hopeful we can continue working closely with the city.”

The reference Rillos made to “competitors” includes platforms owned by Expedia, which operates the short-term rental companies HomeAway and VRBO. Expedia has not been collecting or remitting taxes to the city from its short-term rentals, and it also didn’t comply with all of the city’s subpoena requests submitted as part of enforcement actions.

Expedia never even bothered to play ball with the city – they took the position that those taxes were for the renters and owners to figure out, and not their platform. Airbnb tried to work with them, and for a year and a half there was some sort of peace between the two entities. Then a new City Council took office and promptly blew that up.

Nobody on that Council or in mayor LaToya Cantrell’s office seems to understand that VRBO and Airbnb are what you get when you build your city as a tourist destination and when you spend decades promoting policies that run off middle class people along with the business community. The money in the city starts to come from out of town, and it starts to be centered on rentals for vacationers.

And there’s a huge influx of hipsters from the East Coast who are buying properties in neighborhoods like Treme (because, after all, they saw the HBO show!) and the Marigny, gentrifying what used to be bad neighborhoods and then renting them via Airbnb and other sharing-economy apps to other hipsters for weekend getaways in the Big Easy. Native New Orleanians see that as insane, but to the PBR-and-arugula crowd a weekend in a renovated shotgun house just minutes from the French Quarter is an “authentic New Orleans experience.”

The Huffington Post did a video piece on this bashing Airbnb back in November, but what comes through loud and clear even despite the socialist slant is that people are going to find a way to make money, and in a free country (or even in one which isn’t free) you really can’t stop them. What the piece neglects to mention is that a lot of the neighborhoods Airbnb rentals are making viable were absolutely awful, crime-ridden, blighted disasters before the latest craze.

And seeing as though not a lot of other capitalist pursuits turn much of a buck in New Orleans, the city is overrun with Airbnb properties now. That irritates potential homebuyers who don’t want to live in far-flung locales like LaPlace or Slidell. And the fact New Orleans East, which is where there’s a bona fide development opportunity, still hasn’t really come back from Katrina, means folks who want to live in the city and have that urban living experience will pay big-city prices for it.

The realistic way to handle this would be to encourage real estate developers to take the crappy parts of town over and turn them into apartment buildings to soak up the demand for housing, and then it wouldn’t matter so much that out-of-towners are buying up houses to rent on VRBO. You’d have the issue of the neighbors complaining about loud music and God-knows-what happening next door when the vacationers from Syosset get into their cups, but that’s a relatively minor annoyance.

But when you’ve got a city government run by leftists who know zero about the real estate market other than they think “affordable housing” is the only dynamic of consequence, you’re not going to get a functioning market. You’re going to get what you have. And so far it’s awfully clear that the attempts to drain Airbnb and VRBO rentals out of the city have zero chance of working.