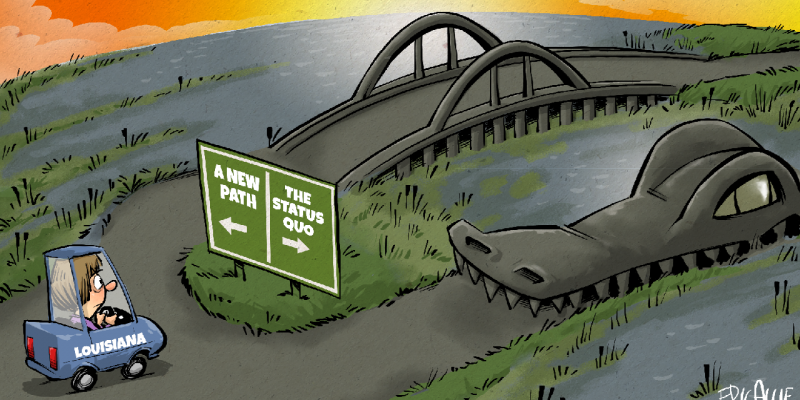 As of July 1, taxpayers in Louisiana will be paying more than $800 million in additional state taxes than were on the books coming into this year. The first hit came in the form of an unintended consequence of federal tax reform, which resulted in an increase in income taxes at the state level by $341 million. This happened in several other states as well, which spurred lawmakers in a handful of job growth states like Idaho and Georgia to rush to make taxpayers whole by lowering tax rates. Meanwhile, Louisiana lawmakers quietly counted their blessings and called it a “boon” to the state.

Then, just last month, Governor John Bel Edwards signed into law an additional $499 million in increases, primarily a .45% state sales tax measure that renewed part of a temporary sales tax increase passed in 2016. The Governor and legislative leaders had promised that tax would expire this year.

Once again, hardworking Louisiana families are burdened with increased taxes and a bloated state budget – the largest budget in Louisiana’s history, when federal tax dollars are included in the mix.  To borrow a phrase from my millennial friends: it is what is. The real question is: where do we go from here?

To answer that question, we must acknowledge the two options on the table.  We can either continue to accept the status quo, where we operate under the shadow of Huey Long’s populism and where special interests and a deeply-entrenched good ol’ boy network hold the power OR cast a new vision to give Louisiana a chance for different and better results.

After decades of short-term decision-making by Republican and Democratic lawmakers alike, Louisiana stands at a crossroads. Repeated budget crises, a confusing and cumbersome tax code, a rapidly expanding welfare state, and a constitutional structure that impedes responsible governing practices have brought us the sagging economy in which we find ourselves.

Jobs are hard to come by, and personal income is stagnant in an economy that ranks worst in the nation by nearly every objective measure. Meanwhile, business owners too-often struggle to find qualified people to fill jobs that are open thanks both to policies like Medicaid expansion that discourage work and an education system that, while improving, still fails to produce a robust and well-trained workforce for the state.

Yes, an oil and gas recession hit us particularly hard. Yes, we’ve had more than our fair share of natural disasters in the last 15 years. And, yes our neighbors to the east and west offer better economic environments for business growth and job creation.

Our status quo solution to all of this? Double down on those things that led us here: higher taxes, more spending, open season for lawsuit abuse, and continued handouts to special interests. As Albert Einstein is often quoted saying: the definition of insanity is doing the same thing over and over again, while expecting a different result.

We can – and must – do better. Louisiana needs a long-overdue change to another approach: comprehensive reforms to the state’s budget, fiscal, and constitutional structures, the combination of which can finally bring the state into line with 21st century practices.

Where do you stand: for the same old sad story of the status quo or for a new vision of Louisiana that grows our economy, creates jobs, expands pathways of opportunity for everyone, and takes care of those who are most in need?  I hope you will join me in standing for the latter.