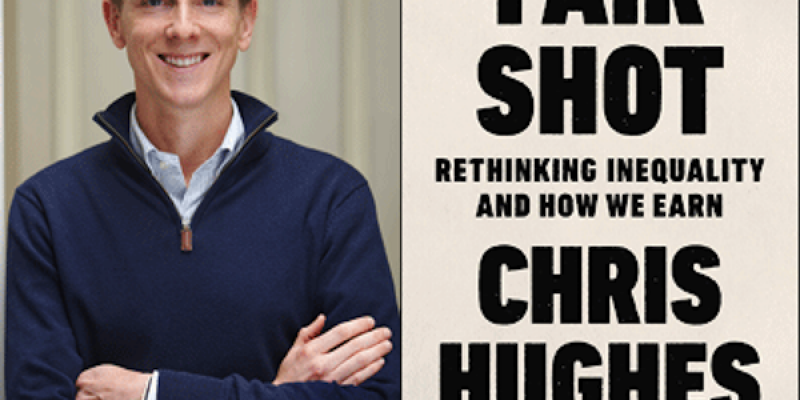 Facebook co-founder Chris Hughes argues that the wealthy should pay the government to give cash handouts to those in the lowest income brackets. He argues that it isn’t faire that he only worked for Facebook for three years and earned $430 million based on the value of his initial stock in Facebook, and his “lucky break.”

Hughes, 34, was one of Facebook’s co-founders, along with Mark Zuckerberg and three of their Harvard classmates, in 2004.

He said in a recent Techcrunch “Interesting People in Interesting Times” podcast:

“That is indicative of a fundamental unfairness in our economy. Income inequality in our country has not been this bad since the Great Depression. And even though we’re reading the headlines that unemployment is at 3.9 percent and the stock market is at record highs, what’s actually happening is that the median incomes in our country haven’t budged in nearly 40 years. At the same time stories like mine create an illusion of economic opportunity.”

Hughes, author of “Fair Shot: Rethinking Inequality and How We Earn,” is not an advocate of the universal basic income (UBI) concept, which multi-millionaire and billionaires Andrew Yang, Richard Branson and Mark Zuckerberg support. UBI involves the U.S. government providing standard cash payments to all citizens regardless of their employment status.

Hughes argues the U.S. tax code should be adjusted to give a $500 monthly tax credit to every working American who earns less than $50,000 per year.

Hughes also suggests that the government should tax data collectors. “You could tax data and distribute a check to everybody. We all create immense amounts of data. Not just your Facebook post, but your phones know where you are physically, your Fitbit knows your heart rate, your calendar knows where you’re going to be.”

If those companies are making billions of dollars in profits, in part thanks to data collection, Hughes argues, then “there is an opportunity to say: Our collective data is powering these profits, we should all share a little bit in the upside. You could ask these companies to pay a small tax into a sovereign wealth fund and have that be distributed as a data dividend. A check to every single citizen as a recognition of the value they’re creating.”