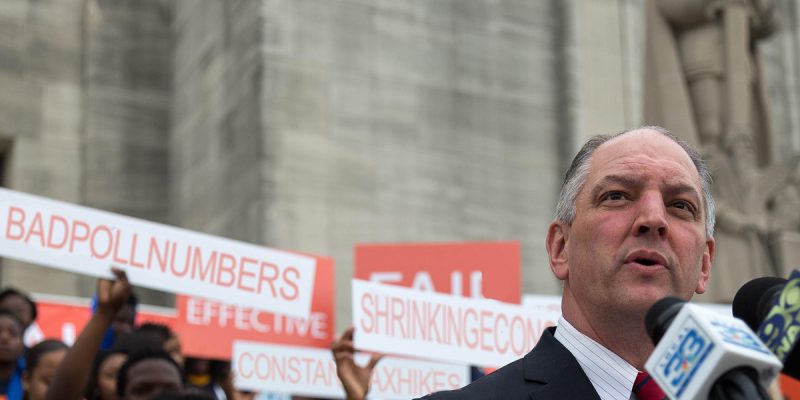 That’s the finding of the new quarterly Morning Consult survey across the country, which measures gubernatorial approval ratings in each state. Edwards now sits at 49 percent, which is the lowest number recorded for him to date.

Disapproval for Edwards is 35 percent, with 16 percent in the don’t know/don’t care category.

Some 22 governors have higher approval ratings than Edwards, with Massachusetts’ Charlie Baker (69 percent), a Republican, and Maryland’s Larry Hogan (68), also a Republican, leading the way. In fact, the entire top 10 in the poll are all Republican governors; you’ve got to drop all the way down to No. 16, Colorado’s John Hickenlooper (52 percent), to find a Democrat on the list.

Republican governors also heavily populate the bottom of the list. The most unpopular governor in the country is Oklahoma’s Mary Fallin at only 19 percent; she’s limping into the end of her last term due largely to a teacher strike over the nation’s lowest teacher wages. That same issue has also felled Kentucky’s Matt Bevin, who like Edwards will be up for re-election in 2019. Bevin has dropped to just 29 percent approval following some clumsy remarks he made attacking striking teachers. But between Fallin and Bevin at the bottom are Connecticut Democrat Dan Malloy (21 percent) and Illinois Republican Bruce Rauner (27 percent). Independent Bill Walker of Alaska tied Bevin at 29 percent to finish off the bottom five.

Forty-nine percent wouldn’t be a bad number for Edwards but for the trend of his approval. Morning Consult’s polling had him as the nation’s most popular Democrat governor six months ago in January, when he sat at 56 percent. That number dropped to 50 in April, amid a raucous legislative season Edwards ultimately more or less won. That he’s at 49 percent, meaning he’s down rather than up since the end of the session, means the governor may have won the legislative battles but not without some political cost.

But there’s another piece to this at work, which is that every Louisiana governor eventually goes into the tank with the state’s voters. It’s a virtual inevitability owing to the fact Louisiana is perennially at the bottom of so many public policy metric rankings. Think of Louisiana as the Cleveland Browns of state governments; we change coaches every four years or so and for the first two years we’ll think good thoughts about the current coach, as he might well be the man (or woman) who can finally get us into the playoffs – but by Year Three or Year Four we notice he’s going 2-14 just like his predecessor did and we turn on him. That’s applicable to Edwards, whose chief achievement so far as Louisiana’s governor seems to be to provide the same bad state government we’ve always had, only at a far higher price than anyone else has charged. It’s difficult to see how that 49 percent number will substantially improve.

Particularly when Edwards picks up challengers for 2019 who will spend all day, every day, filling the airwaves with criticisms of him – something he has largely avoided for two and a half years given the hagiographic press coverage afforded him since his inauguration.

We’ll finish with another important point, which is that most political consultants will tell you an approval rating is a somewhat useful metric but what is more telling is a politician’s re-elect number. That’s something Morning Consult doesn’t measure in its quarterly surveys. What data we have on that question is less comprehensive, but there was a SurveyUSA poll released in late June which showed Sen. John Kennedy pounding him 51-37, and a generic Republican beating him even worse, 51-35. Now – that poll was paid for by Kennedy’s camp, so you’re welcome to take it accordingly. But in March a Mason-Dixon poll showed Edwards at 46, 45 and 51 against Rep. Steve Scalise, Kennedy and Rep. Ralph Abraham, respectively, which averaged out to 47 percent as a generic re-elect number. If you figure the truth is somewhere between those numbers Edwards certainly has an uphill battle which appears to be getting harder as time goes by.

Interested in more national news? We've got you covered! See More National News
Previous Article Report: Louisiana is most dependent state on federal government in the country
Next Article BATISTE: City Park Taking Possession Of Monument It Claimed Not To Own