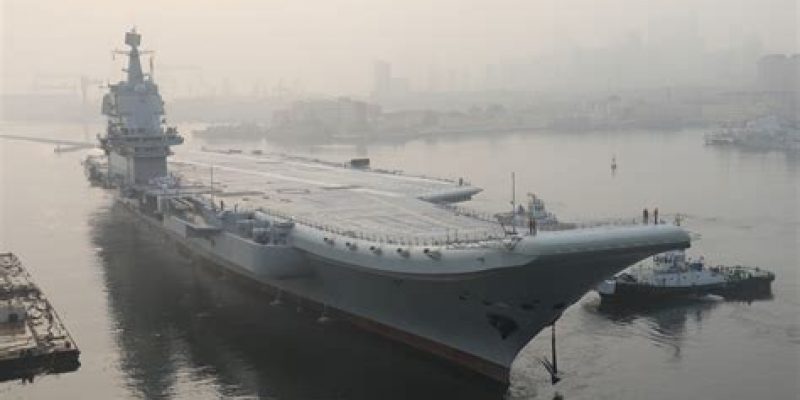 China continues to challenge for power on the world stage. Just recently, the first ever domestically designed and built aircraft carrier in China took to the seas. This massive ship, known as the Shandong, was conducting some trials to further test its functionality out on the open water. This was the second such test, and another progressive step towards an eventual fleet of aircraft carriers under Chinese command.

The US is gradually realizing who the real global competitor is in the 21st century. By many metrics, China may be seen to have the comparative advantage. Their population size is over four times that of the United States, with over 1.4 billion people compared to America being just shy of ⅓ of a billion. The two countries total land mass is nearly identical, leaving the US with a much needed superiority of efficiency and strength.

The US still has a sizable lead when it comes to overall economic output. Overall GDP in 2017 saw the States north of $19 trillion compares to China hovering around $12 trillion. This separation may very well persist while Trump is in office, as the economy is roaring with his policies, with last quarter coming in at 4.1% growth.

However, China is not a country that seems comfortable with settling. The latest venture into homegrown military might suggests they are planning for a future where they sit on top of the world. Their new aircraft carrier is massive. China Daily writes, “The new carrier displaces at least 50,000 metric tons of water.” This amount of water is surely not so easily comprehended. It is many, many bathtubs.

The aircraft carrier will be used, “to launch J-15 fighter jets…and several types of helicopters,” notes China Daily. While tests are still being conducted, the official launch date is not far off. The 2018 Pentagon report on Chinese military capabilities suggests, “China’s first domestic aircraft carrier…will likely join the fleet by 2019.” This carrier, compared to US carriers, is still, “limited in its capabilities due to its lack of catapult and smaller flight deck than U.S. carriers.”

However, Chinese military plans do not stop here. The Pentagon goes on to report, “China is expected to begin construction on its first catapult-capable carrier in 2018, which will enable additional fighter aircraft, fixed-wing early-warning aircraft, and more rapid flight operations.” This foreign power only seems to have one pedal, and it is not the brake pedal. If the US continues to desire the seat of power atop the globe, a keen eye must be kept on this competitor across the ocean.

Interested in more national news? We've got you covered! See More National News
Previous Article APPEL: Respecting The Office Of The President, And Other Offices We Elect People To Fill
Next Article SICK: SC Man Who Deputies Said Wanted to ‘Cannibalize’ Child Gets Probation